From polling location wait times to election result updates, this live blog has everything you need to know on Election Day. 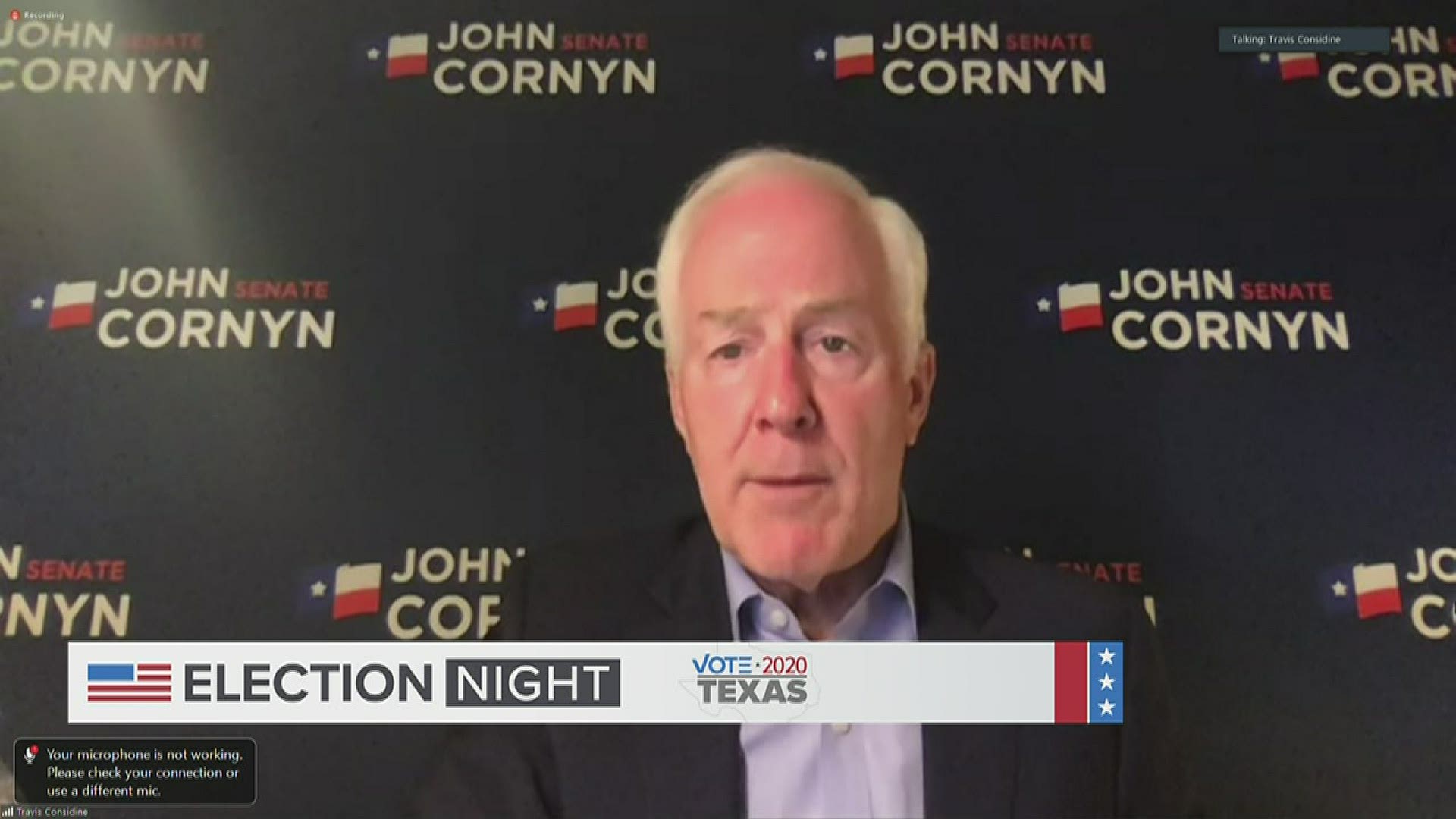 It’s officially Election Day! Polls across Texas were open from 7 a.m. to 7 p.m. As long as you get in line before 7 p.m., you are able to vote.

Once the polls closed on Tuesday, Nov. 3, KVUE is keeping track of the 2020 election results here. Mail-in ballots that are postmarked before Nov. 3 can be received by local elections offices by 5 p.m. the day after Election Day, so mail-in ballots in Texas are expected to take longer to tally.

Election Day 2020: Voters head to the polls in Central Texas

2:05 a.m. – In the race for president, the Associated Press has called battleground state Arizona for Joe Biden. Biden is the second Democratic presidential candidate since 1948 to win the longtime Republican stronghold, according to the AP.

12:30 a.m. – Vanessa Fuentes has been elected to serve District 2 in the Austin City Council.

12:05 a.m. – Texas has voted for President Donald Trump in the presidential election.

Gleason is the first Democrat to hold a county-wide office in 20-plus years. Chody spent $1.2 million of mostly his own money in his campaign.

11:40 p.m. – In the race for president, the Associated Press has called battleground states Florida and Ohio for President Donald Trump, while Joe Biden is projected to win Minnesota.

RELATED: Presidential Election 2020: Live results from across the US

11 p.m. – Incumbent Leslie Pool is claiming her victory in the Austin City Council race for District 7.

This is big considering he defeated his 2018 dem opponent by about 10,000 votes. Keep y'all updated. @KVUE https://t.co/XbkREAaaYa pic.twitter.com/qnTXw3g1k4

9:40 p.m. – Travis County's transportation Proposition B is projected to pass.

9:26 p.m. – Mike Gleason is projected to become Williamson County sheriff and defeat Sheriff Robert Chody. Chody has made headlines recently for the sheriff's office connection to Javier Ambler's death and other controversial incidents.

9:12 p.m. – The City of Austin has claimed victory over Proposition A, or Project Connect.

“With the passage of Prop A, voters have given the green light to a once-in-a-generation opportunity to revolutionize our transportation infrastructure," said City Manager Spencer Cronk in a statement. "Project Connect will be better for our residents’ health, environment, safety, & prosperity.”

8:30 p.m. – Incumbent John Cornyn is projected to win against M.J. Hegar in U.S. Senate in Texas, according to ABC News.

8:25 p.m. – In a race for U.S. House of Representatives for District 27, Rep. Michael Cloud will keep his seat after defeating Democrat Ricardo De La Fuente in the November election.

Rep. Cloud, who is a Republican, has been representing the district since 2018.

District 27 spans the Texas coast and stretches north to Caldwell and Bastrop counties.

8:18 p.m. – The Texas Secretary of State elections website has been restored. The secretary of state noted that "this issue (was) affecting the front end display of our webpage. It is not a malicious attack by a foreign/bad actor."

8:08 p.m. – Donna Howard and Gina Hinojosa have won re-election in districts 48 and 49. Celia Israel and Eddie Rodriguez have been elected as state representatives in districts 50 and 51, respectively. See real-time results here.

7:45 p.m. – The Texas Secretary of State elections website is experiencing technical difficulties. The office said it is working with its vendor to resolve the issue as quickly as possible. Data sent to third parties and new organizations are not affected.

Our election results webpage is currently experiencing technical difficulties. We are working with our vendor to resolve this issue as quickly as possible and apologize for any inconvenience. Data to third parties/news outlets has not been affected.

#JustIn: @RepMcCaul leads @SiegelForTexas with 150,000+ votes counted (25% of precincts reporting). In 2016 and 2018, there were more than 300,000 votes in this race and with this year’s turnout it will most likely be much more. Catch all the results on @KVUE pic.twitter.com/popinid0XD

7:30 p.m. – In the race for Williamson County sheriff, Democrat Mike Gleason leads at 57% of the vote, while incumbent Robert Chody has 43%.

7:25 p.m. – Early voting results show Austin's Proposition A and Proposition B passing with 58% and 67% of the vote respectively. Austin Mayor Steve Adler said, "It would be near impossible for the vote to flip at this point. I am so incredibly excited and proud to be part of a community that so strongly tonight said that it wanted to walk into our future."

7:20 p.m. – In the race for Williamson County sheriff, Democrat Mike Gleason leads the early vote at 67% against incumbent Robert Chody at 33%.

7 p.m. – Election Day polls have now closed. Anyone in line by 7 p.m. will be allowed to vote. KVUE will keep track of the 2020 election results here. Mail-in ballots that are postmarked before Nov. 3 can be received by local elections offices by 5 p.m. the day after Election Day, so mail-in ballots in Texas are expected to take longer to tally.

Over 43,000 people have voted today. Our poll workers are still asking for more voters. Help us find some by 7 PM. https://t.co/StJCcmUUcR is where you can make your plan. #ElectionDay #VoteTravis pic.twitter.com/N6ooNwR1PH

5 p.m. – Two hours ahead of the 7 p.m. deadline, most polling places in Travis and Williamson County are showing short wait times.

4:45 p.m. – Travis County Clerk Dana DeBeauvoir is reminding voters that hand delivery for mail-in ballots closes at 7 p.m. sharp. Mail-in ballots cannot be accepted after 7 p.m., so she says to head to 5501 Airport Boulevard before then.

The rule for voting in-person is that as long as you are in line by 7 p.m., you will be allowed to vote. However, DeBeauvoir told KVUE the same rule does not apply to being in line in your car to drop off your mail-in ballot. The cut-off is 7 p.m.

DeBeauvoir said there have been no lines for hand delivery today.

42,000 people have voted today. You still have 2.5 hours to head to one of the 178 voting centers in the county. Our poll workers would really like to see you. Remember, if you're in line by 7 PM you're able to vote. #ElectionDay #VoteTravis pic.twitter.com/oUdPlb9n5E

4:30 p.m. – KVUE's Jenni Lee spoke with a 53-year-old Austin woman who voted for the first time ever today.

3:50 p.m. – KVUE's Jenni Lee is at polling locations as voters cast their votes on Tuesday. She spoke with volunteer Amy who is helping voters be heard this election.

Numbers Twitter, this is for you: Over 35,000 people have voted today. You know the drill. Make your plan at https://t.co/StJCcmUUcR. If you've already voted help your friends make their plan. #VoteTravis #ElectiondDay pic.twitter.com/3GaTyZARN2

2 p.m. – KVUE's Tony Plohetski reports that APD Chief Manley has said in a City memo that the department has implemented "tactical alert," which means all officers of all ranks will report to work in uniform ready for election aftermath. Officers assigned to protests have undergone training that includes the "least amount of physical intervention."

10:40 a.m. – During a Facebook live just before 11 a.m., Travis County Clerk Dana DeBeauvoir said more than 20,000 Travis County residents have turned out to vote Tuesday so far. That's about 6,000 voters per hour, she said. "We could see another 72,000 voters vote this election," DeBeauvoir added.

Here's how to find the wait times at polling locations in the Austin area.

Some businesses in Downtown Austin board up before Election Day 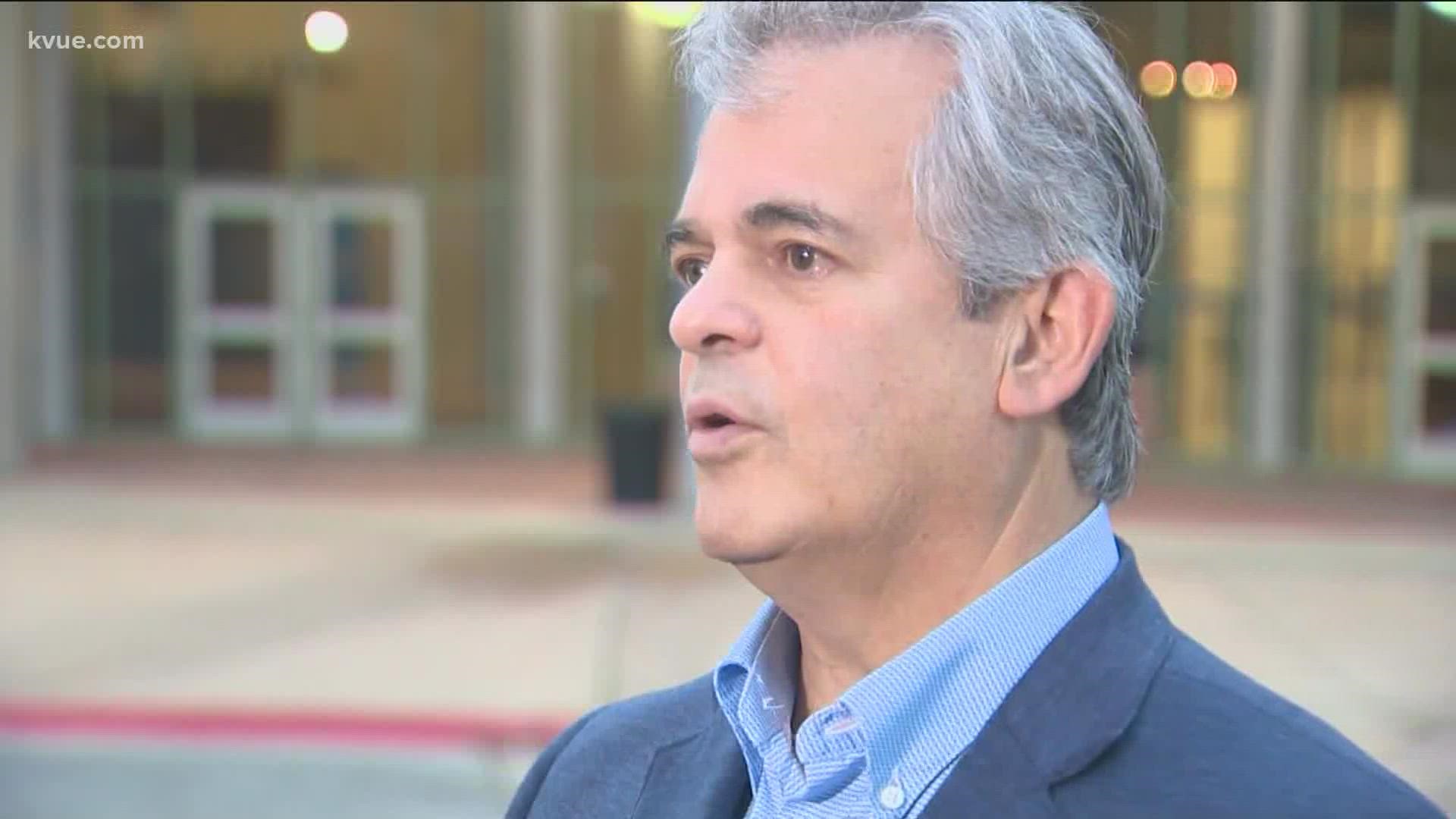