By the year 2040, nearly 4 million people are expected to call the Austin metro area home. We took a look at what the residents of tomorrow will look like.

AUSTIN, Texas — From the Waterloo settlement of 1835 to the bustling Austin of 2019, one fact rings true about the Texas capital: every 20 years, the metro area's population doubles.

"I've long said that people move to Austin from all over the place to become who they want to become," City of Austin Demographer Ryan Robinson said. "And I still sort of believe that."

As the city demographer, Robinson is tasked with studying the numbers of the past and predicting the future. So KVUE asked him: What's in store for Austin in the next 20 years?

Surprisingly, he believes the growth rate will slow down just a bit.

"We actually think we're going to fall off of that 20-year doubling rate, but not by much. So, instead of doubling every 20 years, it might double every 25 or 28," he said.

"By 2040, it won't just be downtown and The Domain," Robinson said. "But you'll have eight or nine big, vibrant, sort of satellite centers around the region."

And instead of just "ATX," Robinson thinks it will be ATXSA – as in Austin-San Antonio.

"By 2040, we'll be kind of one big indistinguishable, urban mass," Robinson said.

But that's not the case for within the Austin city limits and the 15 ZIP codes that make up the city's urban core.

"That's becoming less diverse. And that's because it's become so much more expensive," Robinson said. "Even though the City is very interested in crafting new housing policy and increasing our housing capacity and bringing people back in, we are competing with land value. And land inside the City of Austin is going to be more expensive than it is in Kyle or Buda or East Round Rock or Leander."

The people living in the more expensive Austin of 2040 will also be older compared to today's younger population.

Younger Baby Boomers and older members of Generation X are moving to Austin at a faster rate than before. In fact, a recent study shows almost one-third of downtown households are occupied by boomers and Gen Xers.

It's a trend called the "Silver Tsunami".

"I think that what it means to retire is changing. I don't think that people will be able to afford or even be interested in fully retiring. They're going to want to sort of stay in the game," he said. "And if that's true, places like Austin will become increasingly attractive for retirees."

But Austin will be a bit less attractive for families. More families are already choosing to live in the suburbs and there are entire neighborhoods in Austin with few to no kids. 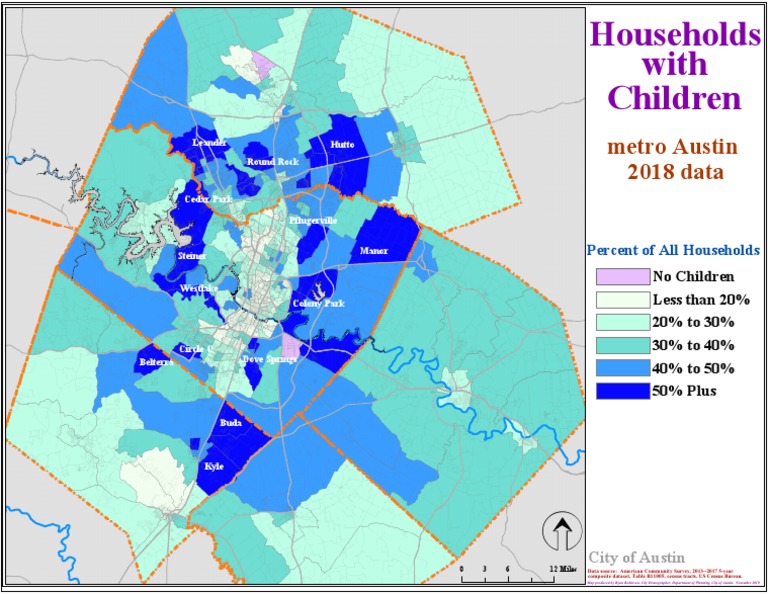 Households With Children 2018
Discover everything Scribd has to offer, including books and audiobooks from major publishers.

Experts predict the trend of families moving to the suburbs will continue – but there is a factor that could change that.

"Millennials," Robinson said. "Millennials have shown in study after study to greatly prefer an urban location, right? Will they still do that when they begin to have children? I think that – I think you'll see some of that. But I also think some millennials will go to the suburbs as well."

The next 20 years will undoubtedly bring change to Austin, but Robinson believes the thing that's made the Capital City special for the 60 years he's been here is what will keep it special in 2040 and beyond: the people.

"It's a place where people feel free to be creative, feel, they feel free to follow their own religion, to love who they want to love and that might sound kind of corny but I – I really think Austin is that place," Robinson said.

The place so many are proud to call home.