Lehman High School in Kyle, Texas, confirmed the firing on Facebook after videos were posted on social media Friday. 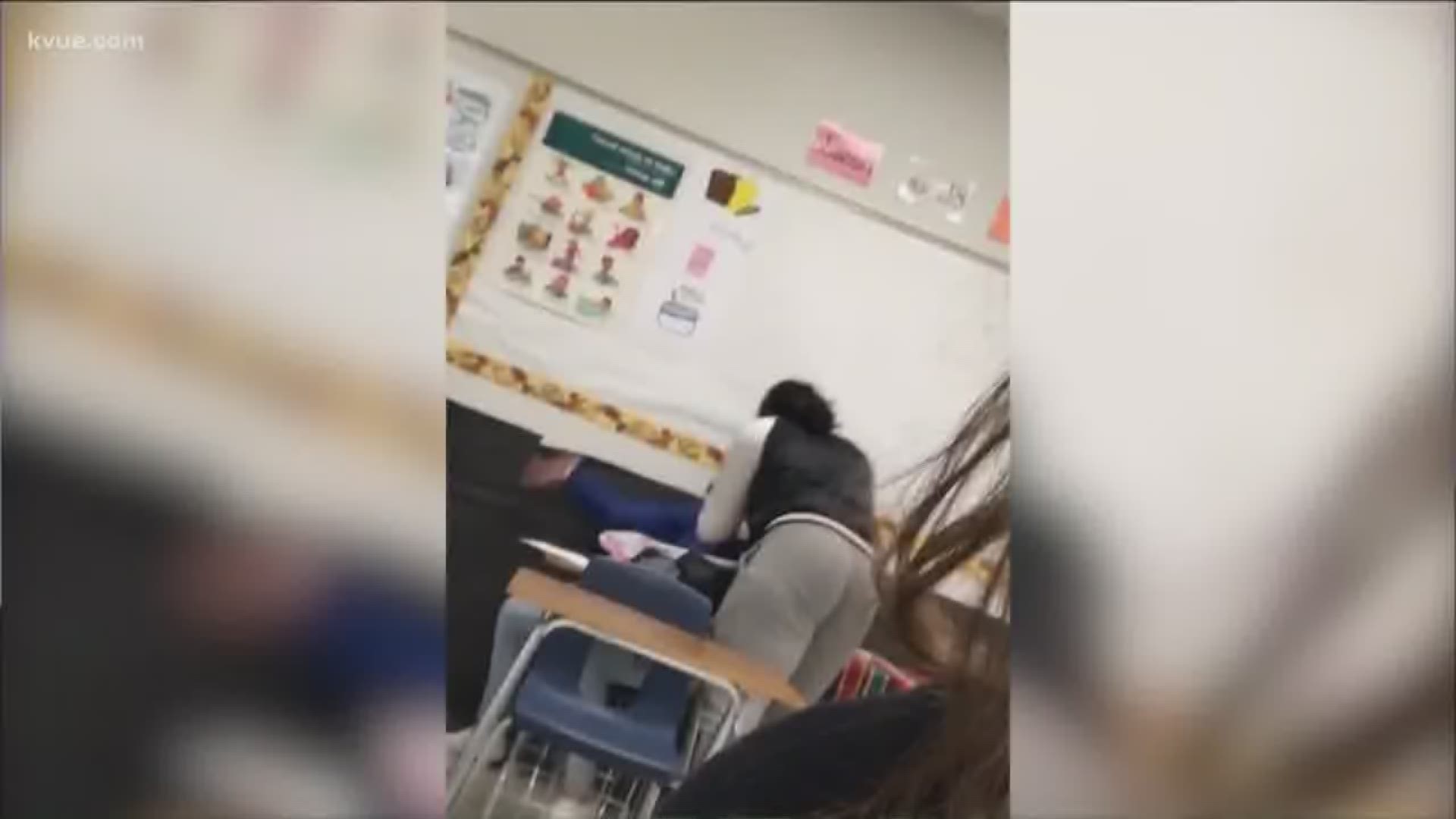 KYLE, Texas — A substitute teacher at Lehman High School in Kyle, Texas, has been fired and charged after videos posted on social media appeared to show her fighting with a student.

The student's lawyer told KVUE's Bryce Newberry days after the incident that the student has been in a dark room over the weekend with a brain injury of some sort. She will see a neurologist and trauma doctor, the lawyer said, as she also suffered acute post-traumatic anxiety.

KVUE spoke with the school district and a student in the classroom, who confirmed that the video circulating on social media captured the incident. In the video, you can see the teacher punching the student multiple times, pulling her from her desk and stomping on her head. Another video also shows the student striking the teacher as she was grasping her in her seat.

The sheriff's office said Lankford was arrested on-site after school resource officers responded. She was charged with aggravated assault with a deadly weapon, a second-degree felony.

A 10th-grader who was in the class and didn't want to be identified told KVUE Lankford was passing out papers and students were laughing. The student said Lankford became increasingly aggravated, before getting into a verbal altercation with the victim.

"The student said 'shut up' back. She said, 'No, you shut up,' and the teacher got in the student's face and put her hand on her chest and her other hand on her arm," the 10th-grader said. "The student swung because she was in her face and pressing her. The teacher put down her glasses – she swung like three times, pulled her to the ground and stomped on her head."

The 10th-grader's father, who also didn't want to be identified, was shocked when he saw the video.

"You wouldn't expect a teacher, or someone who knows better, an adult, to actually attack a child in that manner – it's just mind-blowing," the 10th-grader's father said. "I don't know what a child could say to an adult that would make someone lose their mind like that and actually physically hurt somebody."

According to probable cause for arrest affidavit for Lankford obtained by KVUE, the victim told officials that she was punched, choked, thrown out of her desk and blacked out. She said she was experiencing pain at a 10 on a scale of one to 10 and that she could not see out of her right eye. She said she had no trouble seeing prior to the incident.

Officials said the victim was released to her father, who then took her to a local hospital. Meanwhile, Lankford was transported to the Hays County Jail. Records show she bonded out on Saturday.

KVUE looked into Lankford's record and found that she faced a domestic violence charge in Maryland several years ago. However, the superintendent of Hays CISD said she did pass a background check.

"We ran the fingerprints through the FBI database as well as the Department of Public Safety database," Superintendent Dr. Eric Wright said Monday afternoon. "She was definitely eligible to be hired and met all the legal requirements therein."

"I've been doing this for over 30 years, and this is the first time that I've ever seen this type of action on behalf of a temporary, part-time substitute teacher. I've never seen this before ...  I mean, it's totally disgusting and inappropriate," Wright said. "I don't want people to think this is commonplace because it's absolutely not."

Texas Gov. Greg Abbott weighed in on the incident on Twitter Friday night.

Lehman High School posted the following on Facebook on Friday:

As a family, we share both the good news and bad news together. Today, I have to tell you about an incident that is disconcerting.

This afternoon, we fired one of our guest teachers for hitting and fighting with a student. Under no circumstance is that behavior tolerated at Lehman High School or in Hays CISD. Additionally, the former employee was arrested by the Hays County Sheriff’s Office and faces potential criminal charges. Her actions will also be reported to the Texas Education Agency.

We take the safety and security of our students seriously. We took swift action when this incident occurred and will do everything necessary to protect our students.

According to Hays CISD, Lankford attended her teacher orientation on Aug. 30, 2019. Her first job with the district was on Sept. 13. Friday was her 18th time working for the district. All substitutes in the district are required to undergo and pass fingerprint criminal background checks in order to work in the classroom.

“We are appalled at the actions of this former employee,” said Tim Savoy, chief communication officer for Hays CISD. “There is absolutely no excuse or circumstance that can justify what you see unfold on the video. It is unconscionable what this adult did to one of our students.”

School leaders said they have been in touch with the student in the video. They had counselors available on campus Monday to talk to students who witnessed the incident.