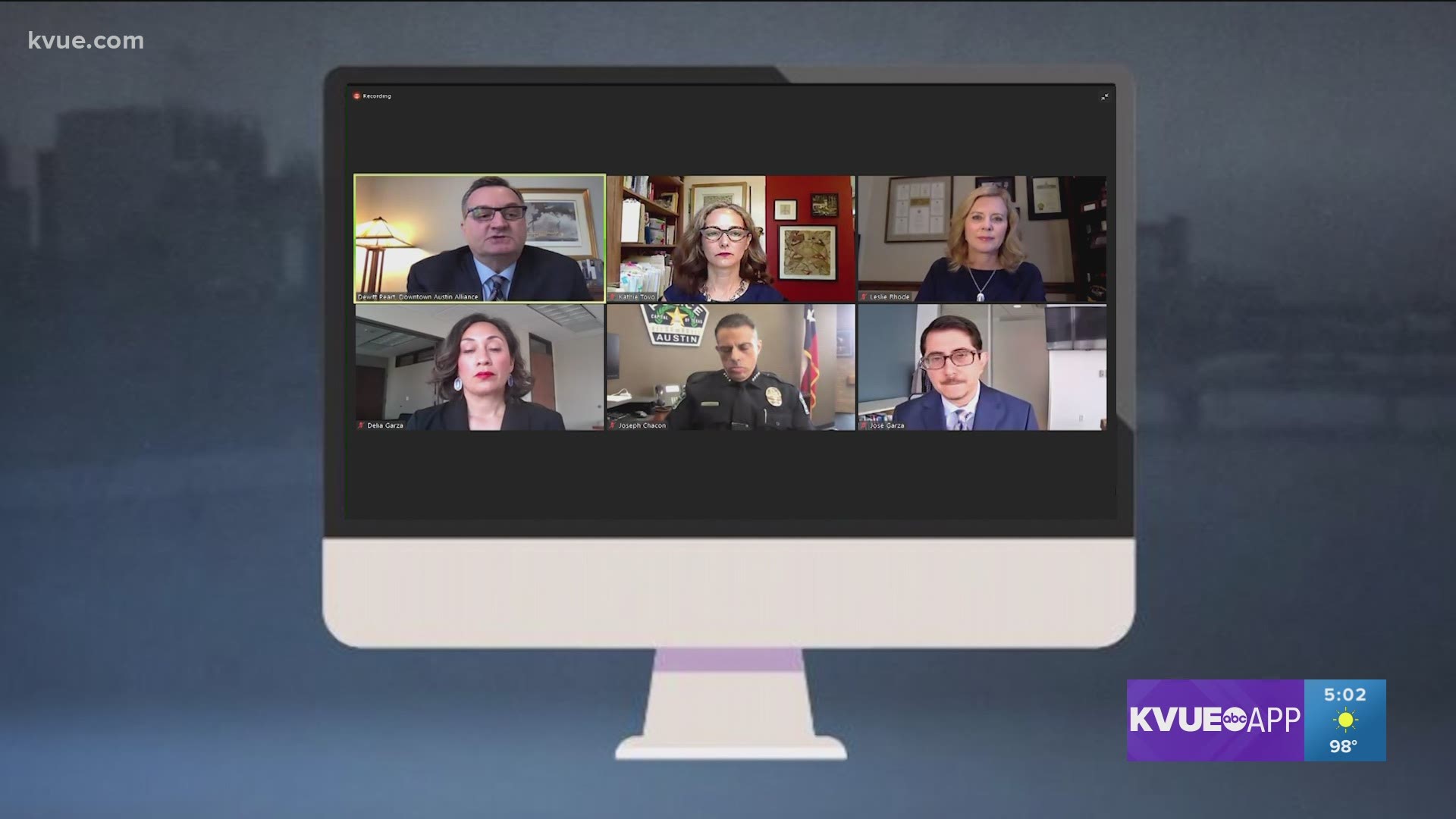 Tovo said Austin is still one of the safest large cities in America at the forum Monday morning but wanted to address community concerns. President and CEO of the Downtown Austin Alliance Dewitt Peart said some types of crime are up in 2021 compared to 2019 and 2020 while others are down.

However, Peart said there's been an increase in shootings in Austin's entertainment district. Through June, there were four homicides in the area in 2021, compared to only one in both 2019 and 2020.

Panelists included Interim Police Chief Joseph Chacon, District Attorney Jose Garza and County Attorney Delia Garza. The questions and concerns for the panel were all submitted by the public beforehand.

Chacon said the Austin Police Department's Violence Intervention Program is helping crackdown on gun violence in Austin. This year, 59 arrests have been made through the program, and APD has seized 109 illegally owned firearms.

Of 11,751 9-1-1 calls from April to June of 2021 that had a mental health component, Chacon said 1,204, just over 10%, were diverted through APD's Crisis Call Diversion Program. He said Austin is the only call center in the U.S. that has a fourth option for mental health services on its call script.

Both Delia Garza and Jose Garza discussed their office's early case review programs. Jose Garza also mentioned the district attorney's firearm surrender protocol, in partnership with the county attorney, that restricts gun access to individuals accused of a crime while on bond.

The panel also discussed a proposed mental health diversion program at The Sobering Center in Austin. Delia Garza said when her office is prosecuting criminal trespass cases, oftentimes business owners don't want offenders to go to jail, but since they don't want them on their property, there's no other option.

Delia Garza said she is in support of the diversion program for many reasons, including this. Jose Garza said his office and the office of the county attorney would "be enthusiastic" to work with the Downtown Austin Alliance, City and Travis County Commissioners Court on the project.

The commissioners sourt is set to discuss the program at its meeting Tuesday. Delia Garza and Jose Garza both encouraged the public to attend the meeting.

Councilmember Tovo told KVUE that this forum came after multiple business owners and residents in the downtown area shared their concerns about the recent shootings and other public safety issues the area has seen.

"They run along the lines of, you know, occasional acts of violence, harassment and other kinds threatening behavior," Tovo said of the concerns people have shared with her. "You know, certainly in recent months, we've had several very tragic events of gun violence on the streets of our town, especially in the entertainment district."

Chacon said APD does staff downtown differently than other areas, especially on the weekends, to ensure response times are as quick as possible.

"If you're planning on coming downtown, don't bring a gun," Chacon said. "It does not make you or anyone else safer."

Chacon said the community can also help by calling 3-1-1 if they see a homeless encampment that is not allowed under the city's homeless camping ban.

"If all of our community had their basic needs met in housing, in food, in healthcare coverage, I am positive we would not see these rising crime rates," Delia Garza said.