APH wants to see Austin stay in the Stage Three territory for two weeks before they transition the City into a Stage Three coronavirus response. 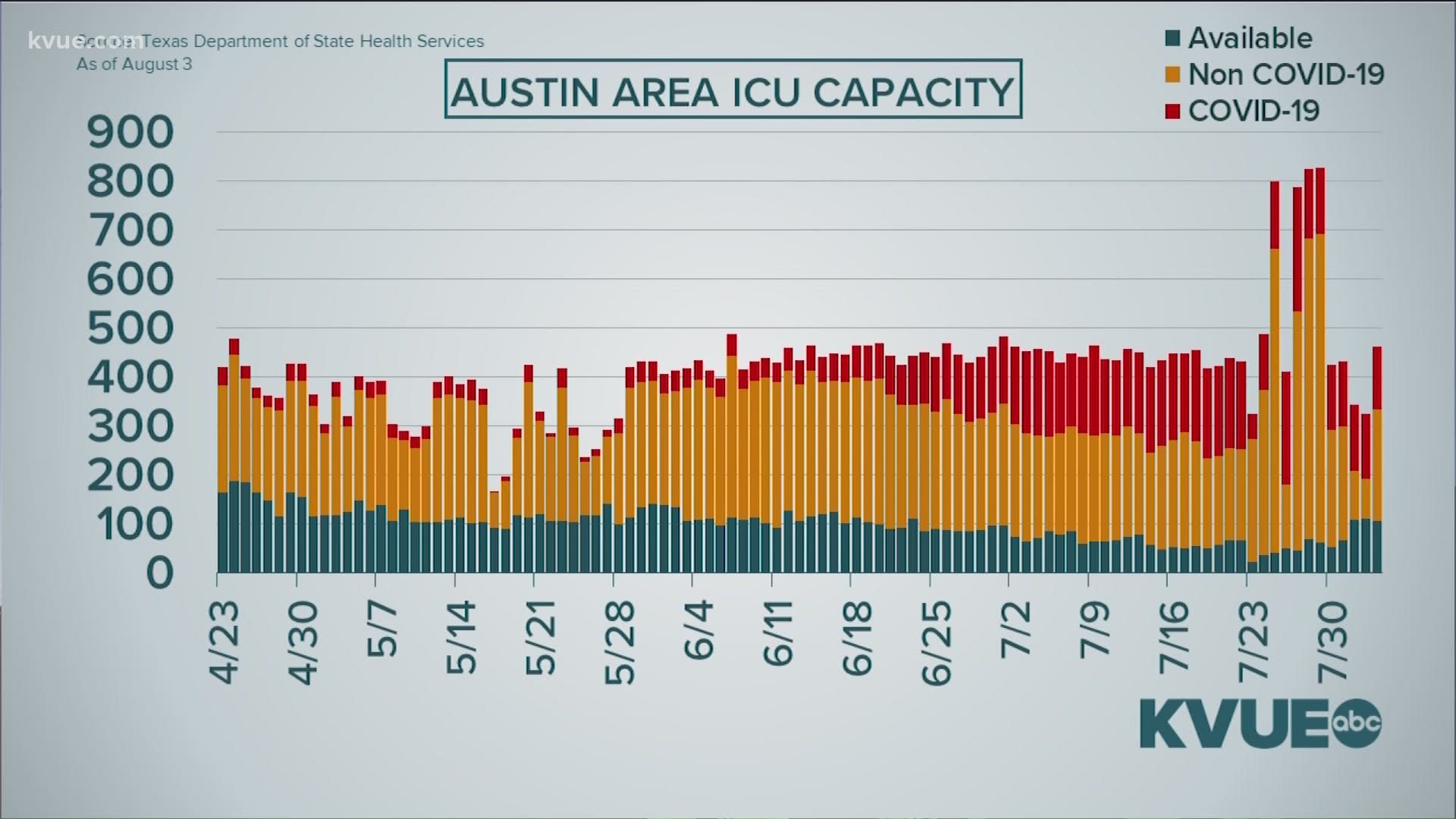 AUSTIN, Texas — ICU capacity in Austin-area hospitals has left the surge stage, but Austin will remain in Stage Four of its COVID-19 response, according to Austin Health Authority Dr. Mark Escott.

Escott told the Travis County Commissioners on Aug. 4 that Austin Public Health (APH) was keeping the City in Stage Four because there has been a small increase in the past week regarding the number of positive cases, and the number of new hospitalizations has held steady instead of continuing to decrease, which Escott called concerning.

"We are still concerned about the fact that we are plateauing right now," Escott said. "And in terms of new cases, we're seeing a small increase in the number of positive cases."

Texas high school football returns for first day of practice in 1A-4A; 5A and 6A still have to wait

Escott told the Travis County Commissioners that APH wants to see Austin stay in the Stage Three territory for two weeks before they transition the City into a Stage Three coronavirus response. He said APH is trying to avoid having people relax too early and spark another surge.

Hospitalizations, ICU admissions, and ventilator use:

Good news to report: hospitals are now reporting ICU's are out of a surge stance--meaning they're back in their normal operating tempo in terms of using ICU's (this is a good thing, if maintained)

According to Escott, the number of new hospital admissions, which had decreased since the middle of July, has flattened out over the past several days. He said this was a cause for concern with in-person schooling starting in nearly 30 days.

The Hispanic community made up 54.2% of the hospitalizations last week, Escott said. He echoed his previous worries, saying "our concern with these graphs are that our Latinx population, our African American population continue to be disproportionately represented."

For the second week in a row, Escott expressed concern at the percentage – rather than the overall number – of hospitalizations in the 10 to 19 age group. Escott said in the July 31 commissioners court meeting that the 10 to 19 age group represented 3.5% of all hospitalizations, which was an all-time high for that particular group during the pandemic.

UT Austin prohibits parties, on or off campus, for fall semester

Escott recommended schools only open at 25% regardless of the coronavirus response stage that the City is in when they do reopen. Escott also said that in accordance to the guidance issued by Texas Attorney General Ken Paxton, he is not sure APH will be able to make requirements for school systems, but reiterated APH is encouraging schools allow teachers at higher risk to work remotely or provide substantial personal protective equipment to those that have to teach in-person.

Escott said the 20 to 29 age group represented the largest percentage of positive cases and that the overall positivity rate was 7.77%. The positivity rate for African Americans was 12.7% and 5.8% for Hispanics, Escott said.

"We have the capacity for tests," said Escott, explaining the qualifications for free testing will likely change. This would allow more individuals, including people without current symptoms, to get tested.