According to a new passenger survey, 79% of Austin flyers feel confident in travel because of cleanliness, masks and social distancing at the airport. 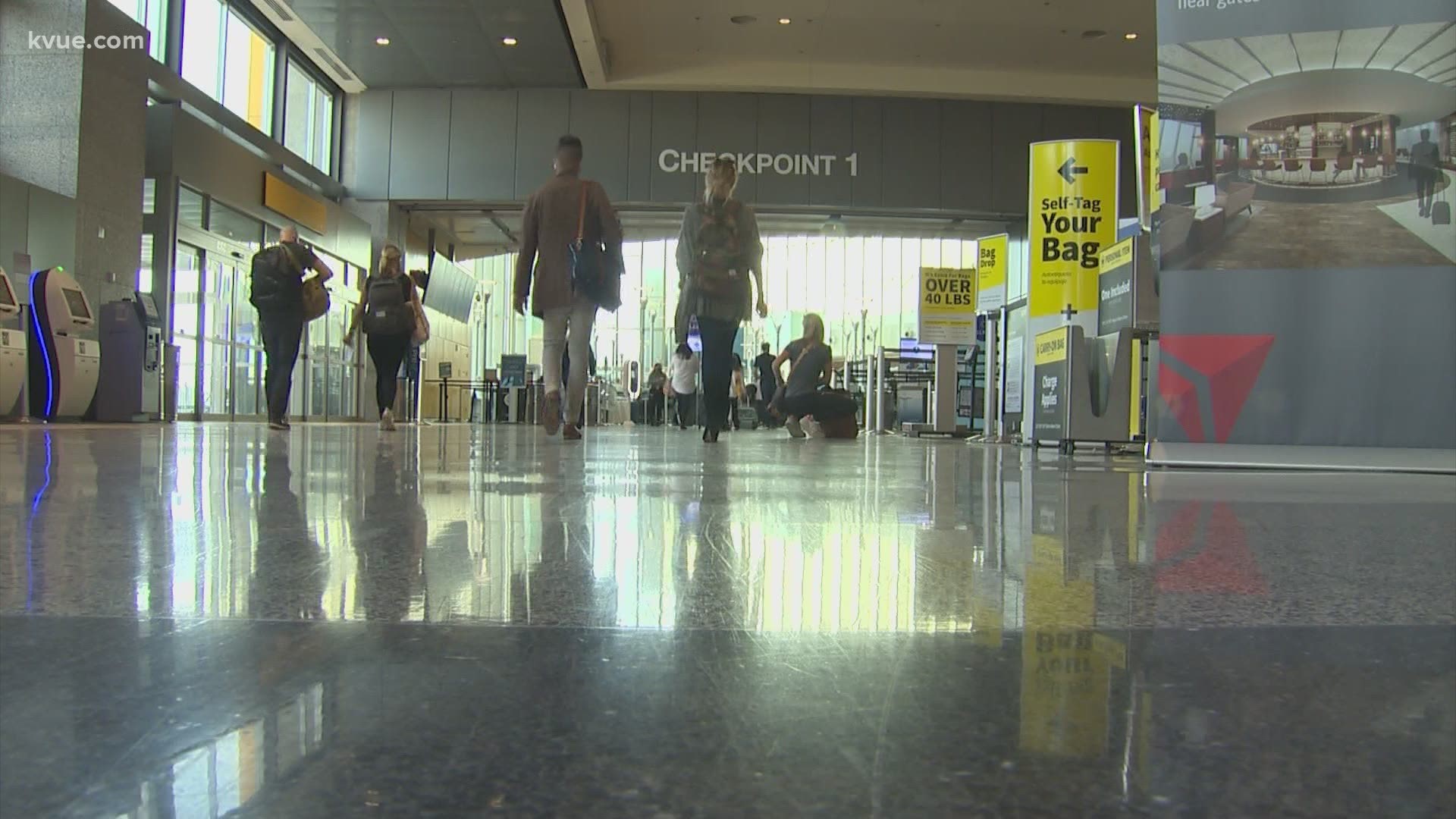 “As more and more information has come out about flying, our comfort level has gone up tremendously,” Buicko said before catching a flight to Nashville on Nov. 12.

It was his fourth flight since March. Traveling is something he’s found more comfortable with each trip.

“Everything that I read and I see from experience is following safety protocols to a T and that makes me feel comfortable,” Buicko said.

Buicko is among the 79% of Austin flyers who feel confident in air travel because of airport cleanliness, masks and social distancing, according to a new passenger survey the airport did of people who have flown since March.

And 69% of passengers felt concerned about flying beforehand but comfortable after seeing the new enhanced procedures at the airport.

The survey results come after a United Airlines and U.S. Department of Defense study found COVID-19 exposure risk is minimal when air filtration systems and masks are used.

In November, the Austin airport recorded its busiest day during the pandemic with more than 11,000 passengers. Travel is still down about 70% compared to the same time in 2019.

But the airport is still working to make travelers comfortable again after passenger traffic nose-dived nearly 100% in April. The normal bustle of 30,000 passengers per day dropped to around 500.

“That’s a big and significant impact,” said Ghizlane Badawi, the airport’s chief operating officer. “We know that deciding to travel or not is a personal decision, but we know that our airport is safe, sanitized.”

The airport now has a team that works around the clock and uses hospital-grade sanitizer on high-touch areas. Like most airlines, the airport is also using electrostatic sprayers that disinfect surfaces and kill contaminants.

Experts predict that a full rebound for the aviation industry is still at least a few years away, based on how the industry recovered after 9/11 and the Great Recession. Badawi and airport leaders are looking to technology that could help Austin’s airport step into the future.

“The focus right now is on touchless and that’s an expectation of our customers,” Badawi said.

Touchless is now part of the experience at Los Angeles International Airport. Flyers can use their phone to control a kiosk and international travelers are screened with facial recognition technology.

A congressional mandate for U.S. Customs and Border Protection will require airports to have the technology eventually, which takes a traveler’s photo when they enter or exit the country and compares the photo to other records including U.S. passports, visas or other travel documents.

Over the summer, though, the Austin City Council passed a resolution as part of police reforms that limits the use of facial recognition technology at city facilities, including at the airport. The airport was directed to comply with all federal rules and requirements.

If the technology is deemed necessary somewhere in the city, the public and council are supposed to be notified of the specifics and the council is required to approve funding for it.

Austin City Councilmember Greg Casar’s office told KVUE the policy was a move to protect the safety and civil liberty of individuals.

The technology is not uncommon at airports in America.

At Denver International Airport, the VeriFLY pilot program uses Daon, which combines touchless and biometric technology to reinvent the airport experience. Flyers can move through the airport quicker with less congestion.

“What we’re all trying to do, I think, is envision the future. And it’s not enough just to ensure that we maintain a safe space for today’s traveler. We have to be thinking ahead,” DEN Chief Operating Officer Chris McLaughlin said.

Local airport leaders have spent years envisioning the future of AUS. The 2040 Master Plan calls for doubling the size of the airport in the next 20 years. But the plan is on hold because passenger demand is still low, and the expansion project was being driven by a record number of travelers – more than 17 million in 2019.

RELATED: Tomorrow’s ATX: What Austin-Bergstrom International Airport will look like in 2040

“There’s a lot of uncertainties around COVID, but there is an opportunity for us to identify any changes,” Badawi said.

One of those changes could include making the design more flexible with the spacing, which would let flyers social distance.

So while that practice is still encouraged, airport leaders know it may be years before flyers and revenue return.

“We’re confident in the experience that we provide at the airport,” Badawi said. “But for our customers that are not ready, we understand and we will be here waiting for them whenever they are ready.”