Austin’s airport is set to double in size by 2040 as more travelers fly through every year. 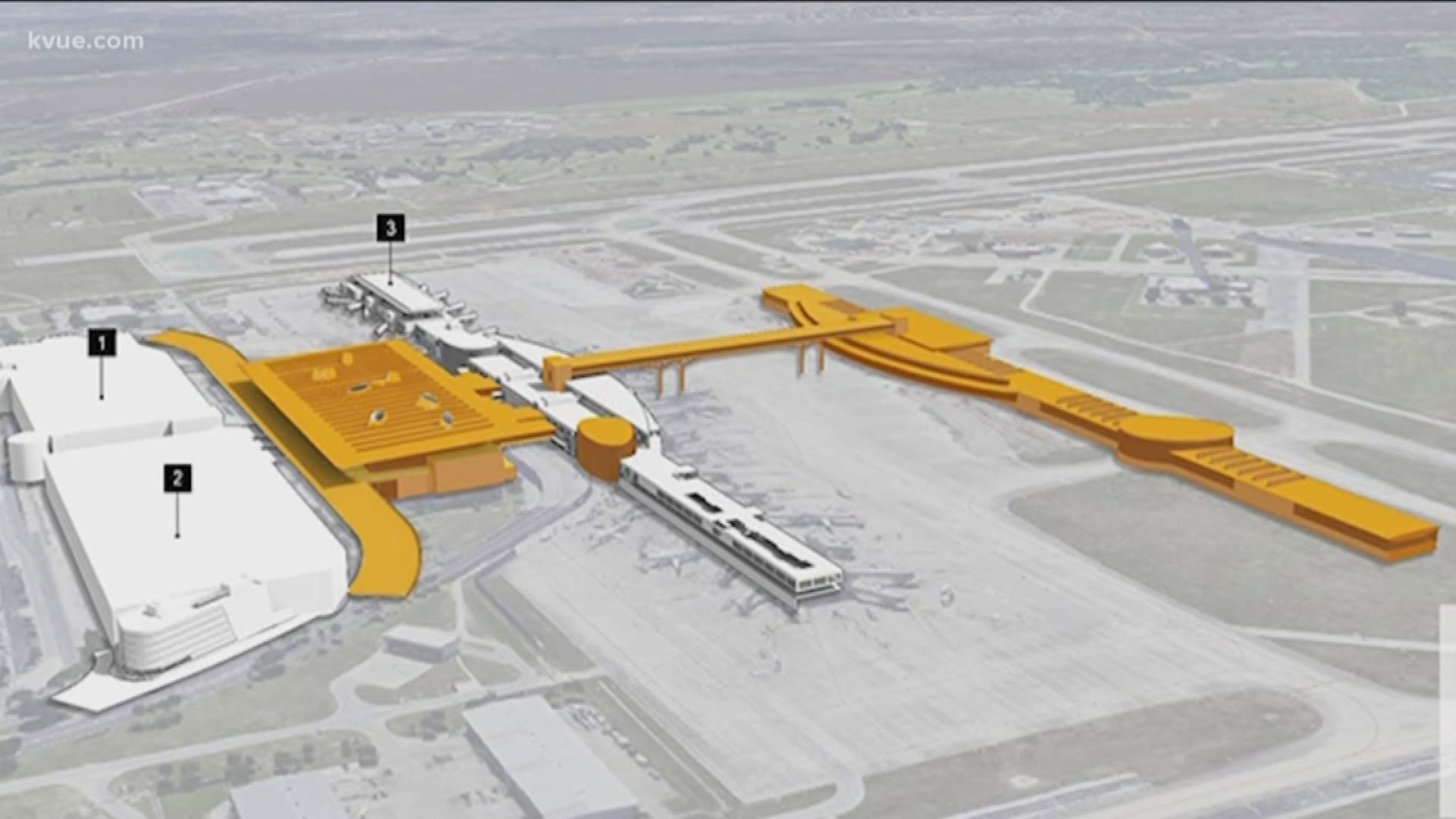 AUSTIN, Texas — When Julie Stone Frederick arrives at Austin-Bergstrom International Airport (AUS), her carry-on and boarding pass are all she needs for a quick weekend getaway.

“I'm all about speed and getting places as quickly as I need to, so I like to be able to get to the airport and just get on my way,” Stone Frederick said.

This travel agent and frequent flyer is no stranger to the airport. When she moved to Austin, the airport she knew was the Robert Mueller Municipal Airport in East Austin.

In 1999, AUS replaced the Mueller Airport. It was designed to accommodate 11 million passengers.

“Austin is continuing to grow by leaps and bounds every day and so I think the airport needs to grow with it,” Stone Frederick said.

From 2014 to 2019, the airport has had a 9.5% growth rate, airport planning and development manager Lyn Estabrook said.

“When looking at that sort of exponential growth, we decided as a group that we needed lots of different infrastructure across the board,” Estabrook said.

In 2018, the airport served nearly 16 million passengers. Earlier in November, the airport recorded its busiest travel day ever, with more than 30,000 passengers traveling through.

By 2040, the airport will be much larger – with the capacity to handle up to 40 million flyers per year – and more like the size of the Minneapolis-St. Paul airport.

Plans include expanding the Barbara Jordan Terminal to include a new ticketing, security and baggage area. The current drop-off curb would be moved farther north.

Credit: Austin-Bergstrom International Airport
This is a rendering of what the Austin airport could look like in 2040. The new terminal, which will have dozens of new gates, is at left.

On the other side of the airport, the South Terminal will no longer serve passengers.

In November 2019, the City offered to buy the South Terminal back from Highstar Capital for $10 million, but city planners have still not decided exactly what to do with the terminal.

Planners are still trying to decide how to connect the current concourse to the new one. Some options include a skybridge or an underground tunnel.

“It includes lots of different changes in the airport,” Estabrook said. “If we want those new flights, we've got to build more gates and more ticket counters and allow for more baggage screening so that your bags can get to your plane.”

For Stone Frederick and her clients, new flights are a top priority.

“If we don't continue to get international carriers or new carriers, or additional nonstop flights, sometimes people just find it easier to either drive to Dallas or Houston to take those nonstop flights out of those cities instead,” Stone Frederick said.

In the past year, airport officials have announced new nonstop service to Paris, Amsterdam, Frankfurt and Calgary. The airport’s air-service development team continues to look for more international flight options to add.

RELATED: The number of nonstop routes at ABIA is down from last year

Yaft was named executive director in May, with previous experience at Los Angeles International Airport and New York’s JFK Airport. She is helping lead the airport’s 2040 Master Plan.

“I think we can do it in a way that's still not too big that people get lost in the airport and not be able to see the city of Austin and the flavor of Austin,” Yaft said.

The 10-year plan will cost about $2 billion, Estabrook said. The airport creates its own bonds and pays them back with revenue from parking, food or retail sales inside the terminal.

Airport officials told KVUE's Bryce Newberry on March 4 the FAA had approved the 10-year plan. Construction on the master plan won’t start until 2021 at the earliest. 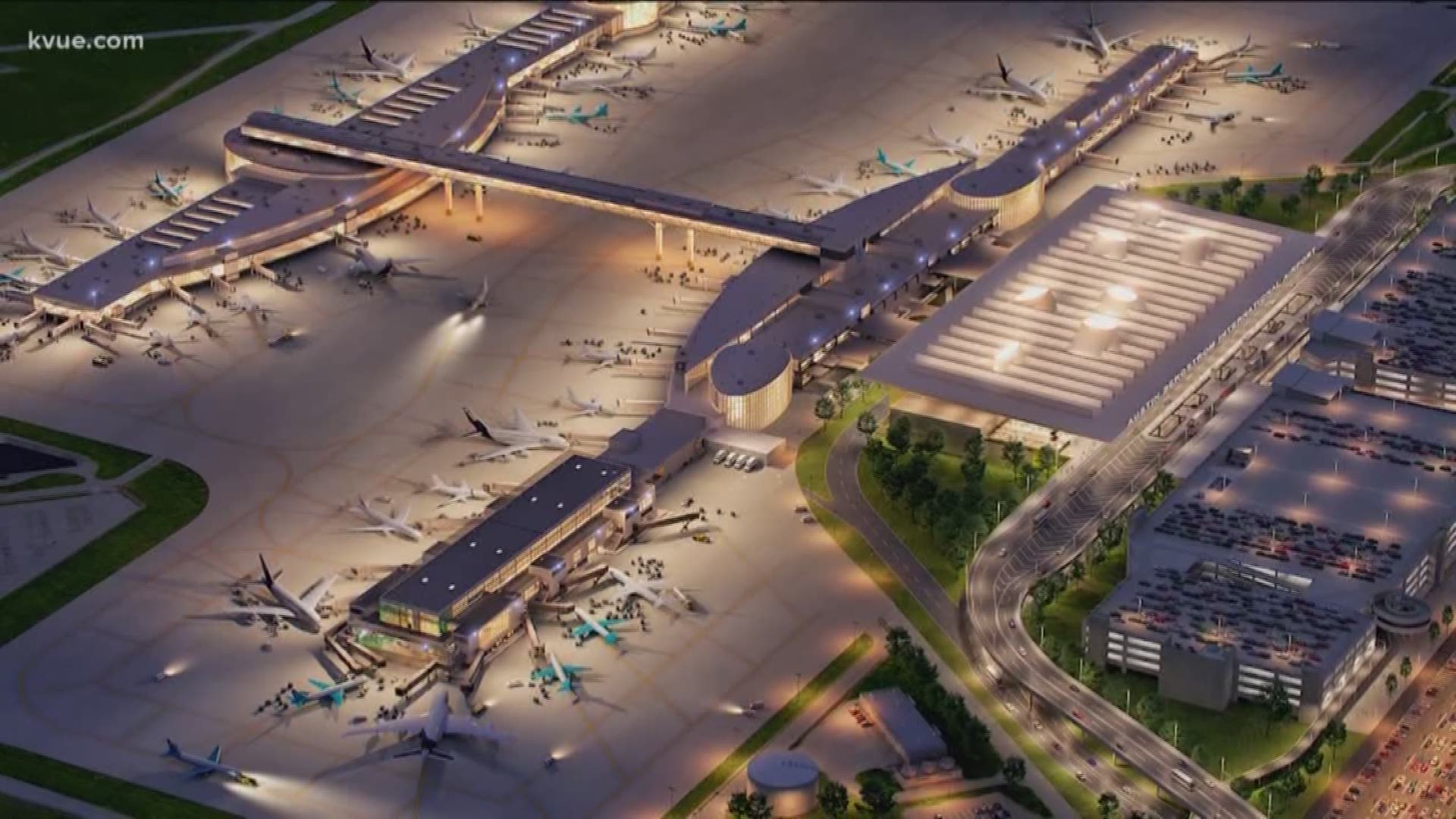 “It's exciting for us to design and plan and build these things. We're being able to look at an expansion that's really going to help Central Texas – double the capacity of the airport. And that's just exciting to us to have a hand in the future,” Estabrook said.

In the meantime, Stone Frederick said she’ll keep booking flights to her favorite destinations and making sure she has the best recommendations for her clients.

“It's a beautiful airport – the food is great and it just has a relaxed vibe and I love when I come home, getting off the plane and hearing live music,” Stone Frederick said.