Gov. Abbott signs handful of bills designed to 'back the blue'

The signed bills aim to stop large cities from defunding the police and enhance penalties for criminal activities that harm law enforcement. 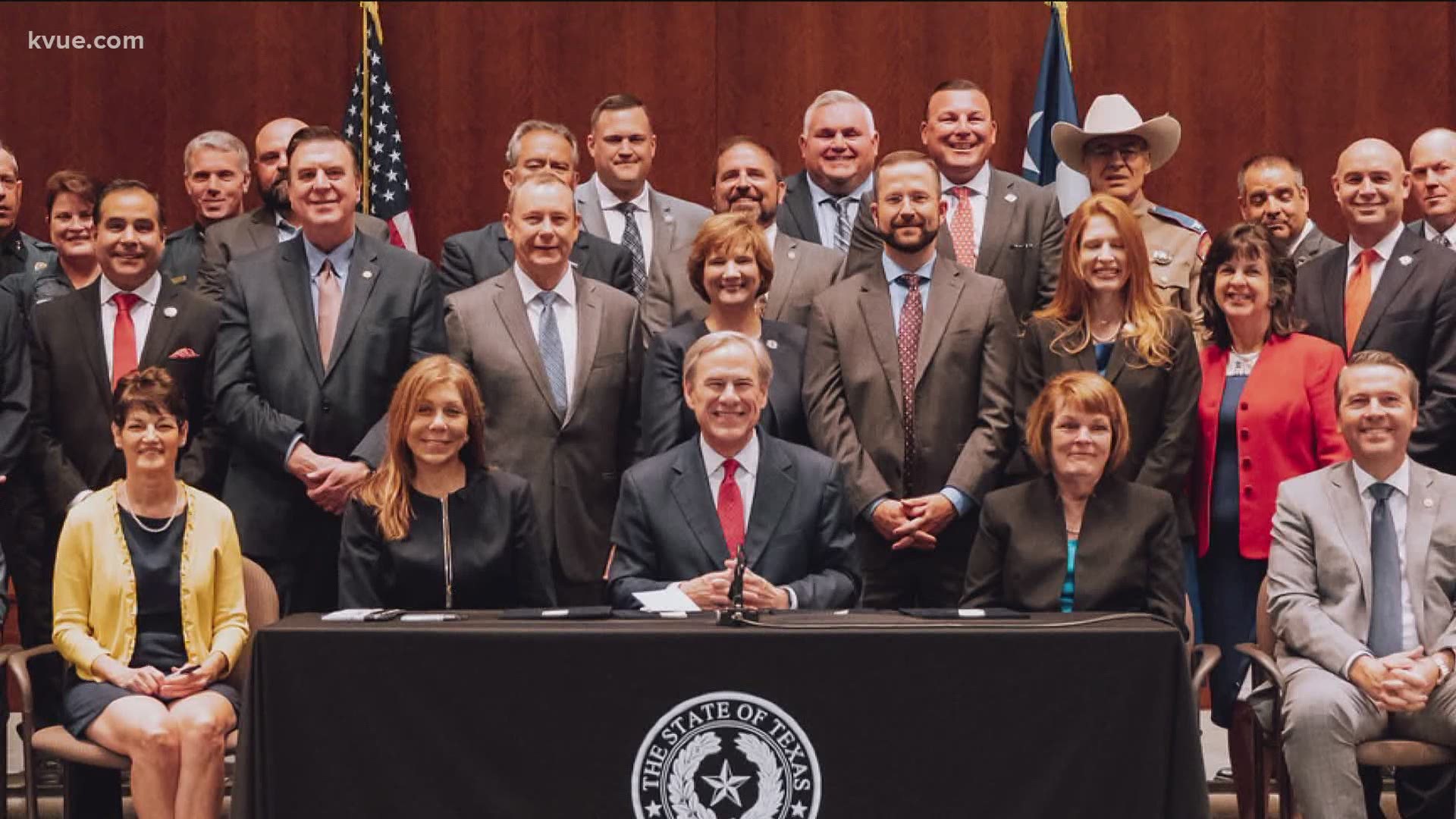 AUSTIN, Texas — On Tuesday, Texas Gov. Greg Abbott signed a handful of bills into law aimed at stopping cities and counties from defunding the police and enhancing penalties for criminal activities that interfere with or harm law enforcement.

“The men and women of law enforcement put their lives on the line every day to keep Texans safe, and they deserve our enduring support and gratitude,” said Gov. Abbott. “Efforts to defund the police are downright dangerous, and these laws will prevent cities from making this reckless decision. These laws also help protect our law enforcement officers in the line of duty by enhancing penalties for crimes committed against them such as using fireworks or laser pointers to harm or obstruct the police. With these laws, we are bolstering our support for law enforcement while ensuring a safer future for all Texans. I applaud the Texas Legislature for joining me in passing these priority items and for making sure Texas remains a law-and-order state.”

Signed several pieces of legislation into law that will stop cities from defunding the police & enhance penalties for criminal activities that interfere with or harm law enforcement. #BackTheBlue #txlege https://t.co/2Vu4zwFcsw pic.twitter.com/L0suKnGEcl

Here is a breakdown of each bill Abbott signed Wednesday:

HB 9: This bill enhances the criminal penalty to a state jail felony offense for anyone who knowingly blocks an emergency vehicle or obstructs access to a hospital or health care facility.

HB 1900: This bill prevents large cities and counties from defunding police. If a city with more than 250,000 residents was determined by the governor's office to have cut police funding, HB 1900 allows the State to appropriate part of a city’s sales taxes and use that money to pay expenses for the Texas Department of Public Safety (DPS).

Such cities would also be banned from increasing property taxes or utility rates, which could have been used to compensate for the reapportioned sales taxes.

In August 2020, the Austin City Council notably voted to chop $150 million from the Austin Police Department budget, roughly 34% of the department's $434 million total budget. Most recently, the APD announced it's temporarily suspending its motors unit. An APD spokesperson said the department will continue to evaluate patrol staffing needs and reallocate officers from specialized units to support patrol operations as needed. Services provided by the Motors Unit, such as escorts, will be available, as needed.

In response to the passage of HB 1900, Austin city councilmember Greg Casar released this statement:

“No matter how much Gov. Abbott wants to send us backward, he can’t send us back to 2019 before George Floyd was murdered. In Austin, we will continue to work to address violence, including violence committed by police. We will work to make sure our budget conforms with the new law, and also conforms with the values of this community. We will continue our march toward racial justice, police accountability, and comprehensive safety no matter what.”

HB 2366: This bill enhances criminal penalties for the use of laser pointers and creates an offense for the use of fireworks to harm or obstruct the police.

SB 23: This bill requires voter approval to reduce law enforcement budgets in counties with a population of more than one million. If voter approval is not received, but the county still defunds the police, the county's property tax revenue will be frozen.