Before the vote, councilmembers listened to at least four hours of community comments. 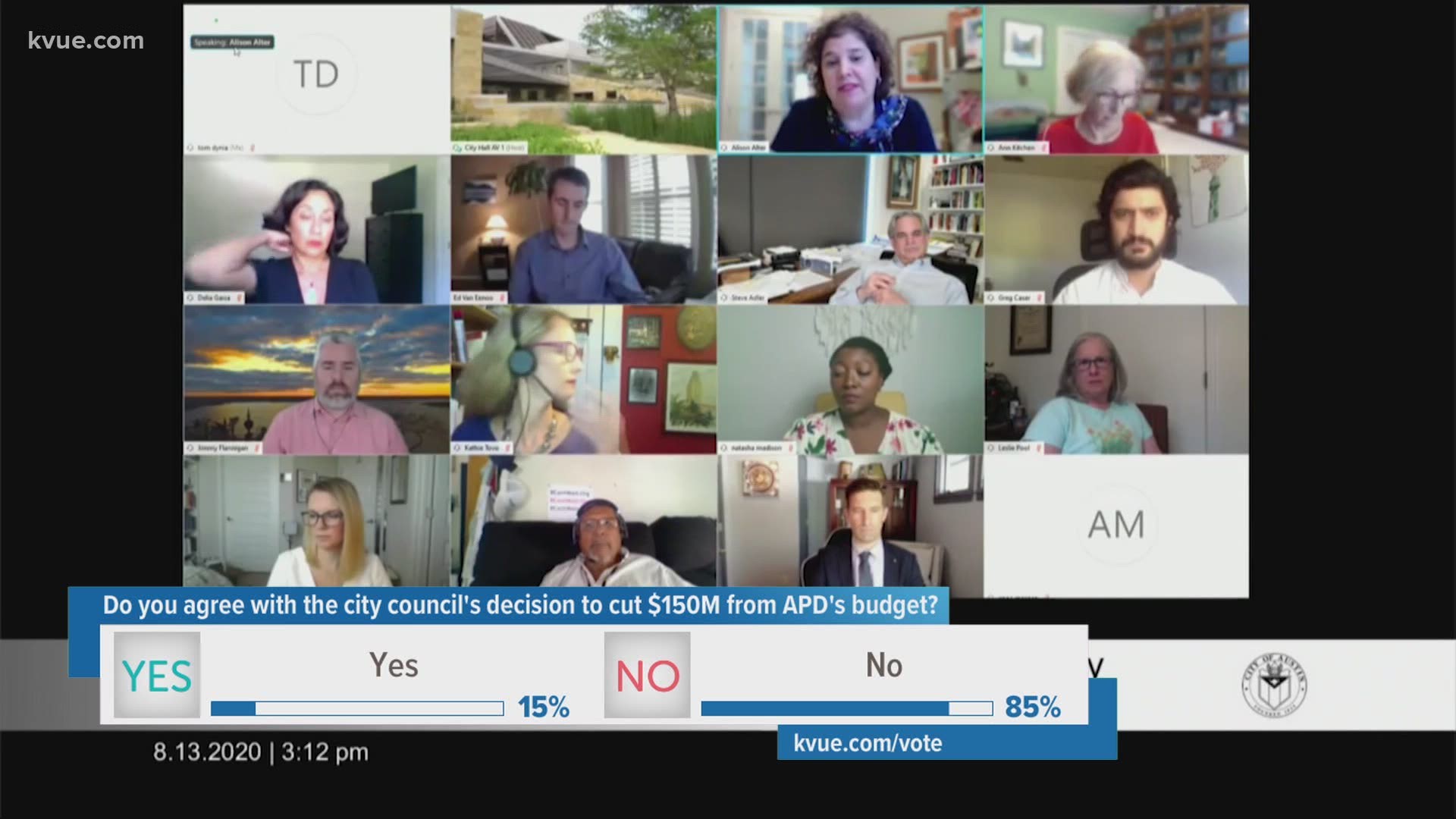 The move comes after months of racial justice protests throughout the city, calling for defunding the police.

Going into Thursday's budget discussions, the council was considering slashing the department's $434 million budget by about a third, or $150 million. Nearly a fifth of that extra money, or $21 million, will go toward things such as violence prevention and permanent housing services.

"Today I hope that the community feels hope," Casar said after the council passed the budget.

"I think this is the most forward-looking budget in memory," Mayor Steve Adler said Thursday. "This is really the budget where we launch our future ... as a fairer, more just, equitable, more universally acceptable city. This budget is full of opportunity and hope. That includes regional rapid transit, especially focuses on mobility deserts, those underground and to the airport, and reimagines public safety in so many new ways."

On Friday, Adler said the council did not cut $150 million from the police, but rather did "something transformative." He said the budget is a new investment focused on the underlying causes of crime that maximizes offer effort to prevent crime in the first place.

1/9 Did #ATXCouncil cut $150M from the police? No. Did Council do something transformative? Yes.

"Some cities are more focused on political agendas than public safety," said Gov. Abbott. "Austin’s decision puts the brave men and women of the Austin Police Department and their families at greater risk, and paves the way for lawlessness. Public safety is job one, and Austin has abandoned that duty. The legislature will take this issue up next session, but in the meantime, the Texas Department of Public Safety will stand in the gap to protect our capital city."

“This is the first of many victories for this next year. And we are just getting started,” said Chas Moore, founder of the Austin Justice Coalition. “Structural change is hard. Ending racism is even harder. We are fighting long-established interests, and our voices and engagement are required in this transformation of our collective values. The decoupling and the effort to reimagine public safety will take place over the coming year by a thousand small decisions. I hope that the thousands of people who have protested in the streets, sent emails and made phone calls over the past two, three months will stay involved and help us get the structural change we want and so desperately need.”

Almost $80 million of the cuts will separate certain functions from APD, such as the 911 Call Center and Special Investigations Unit. The remaining $49 million in cuts will defund APD units including mounted patrol, traffic enforcement and lake patrol. That money would be put on hold as council members "reimagine" public safety over the course of a year.

These are some of the police department units that were cut or reduced during the budget approval:

Before the council voted, they listened to at least four-and-a-half hours of public comments.

Councilmember Casar released a full statement after the vote:

“Today’s budget vote is unprecedented in Texas. We’ve begun a transformational change away from mass incarceration and toward real community safety.

"We know that we cannot simply police away our community’s challenges. Thousands of Austinites demanded we invest deeply in the public health and safety of our community. Today, we chose to create a safer city. We’re opening a new family violence shelter; we’re hiring mental health crisis teams; we voted to get hundreds more people out of homelessness; we funded gun violence prevention programs.

"Today, our city did the right thing.”

Councilmember Alison Alter said the budget is a step to making Austintes safer:

“Right now, we have many Austinites – particularly within communities of color – who do not feel like they are valued by our city or by our police. As a Council, we have a responsibility to listen to their experiences and work alongside Austinites to bring justice and fairness to all members of our community. We must recognize that relying exclusively or even predominantly on police and on punitive measures for our public safety needs comes with staggering costs, both fiscally and morally. We also must recognize that we have overly relied on police officers to perform too many functions in our city that could be better handled by others."

“The Crime Commission is reassured that the community will have input in the process to evaluate police operations and reforms in the months ahead. The budget rider amendment that makes clear police cadet classes may continue next year is encouraging, and we look forward to the timely completion of the work to improve training.

“We remain concerned about the reductions in police positions when crime is increasing and response times are slower.

“Austin is having vital discussions about police reform and public safety. The Crime Commission looks forward to being part of the Reimagine Public Safety Task Force and making additional recommendations for mid-year budget adjustments.

“The community fully supports the dedicated professionals in our public safety departments, including 1,756 police officers, who risk everything for us every day.”

Former presidential candidate Julian Castro took to Twitter to praise the council on their decision.

"Glad to see the Austin City Council leading the way to reimagine public safety. This budget will enhance community safety and improve quality of life, without over-relying on armed police officers," he wrote.

On Thursday, Texas Attorney General Ken Paxton voiced his opposition to the move, calling it a "political haymaker."

"The City Council’s action to slash funding disregards the safety of our capital city, its citizens and the many guests who frequent it," he said. "The City of Austin already struggles to combat widespread crime, violence and homelessness. In light of rising violent crime rates in many cities across the country as well the majority of Austinites opposing defunding police, the mayor and the City Council should immediately reconsider this ill-advised effort at virtue signaling, which will endanger lives and property in Austin."

"Austin City Council’s decision to drastically defund our police department is reckless and dangerous," he said. "I have spent a lot of time listening to city leaders lately, including roundtable discussions with law enforcement, faith and community leaders in Dallas and Houston. Those conversations have instilled in me that we need to bring communities and police departments closer together. Sadly, the City of Austin just drove that wedge deeper in what amounts to a shameful failure to fulfill their obligations to public safety."

"If the mayor and council need special protection they can hire it themselves or put it in a rider for the next budget that removes $150 million from our department," she said.

In the press conference on Thursday, Manley said there were no plans to remove security detail for councilmembers.

Viola Davis buys South Carolina plantation where she was born