It's too late to prevent zebra mussels from spreading in Austin-area lakes, but the Texas Parks and Wildlife Department wants to make sure they don't spread anywhere else. 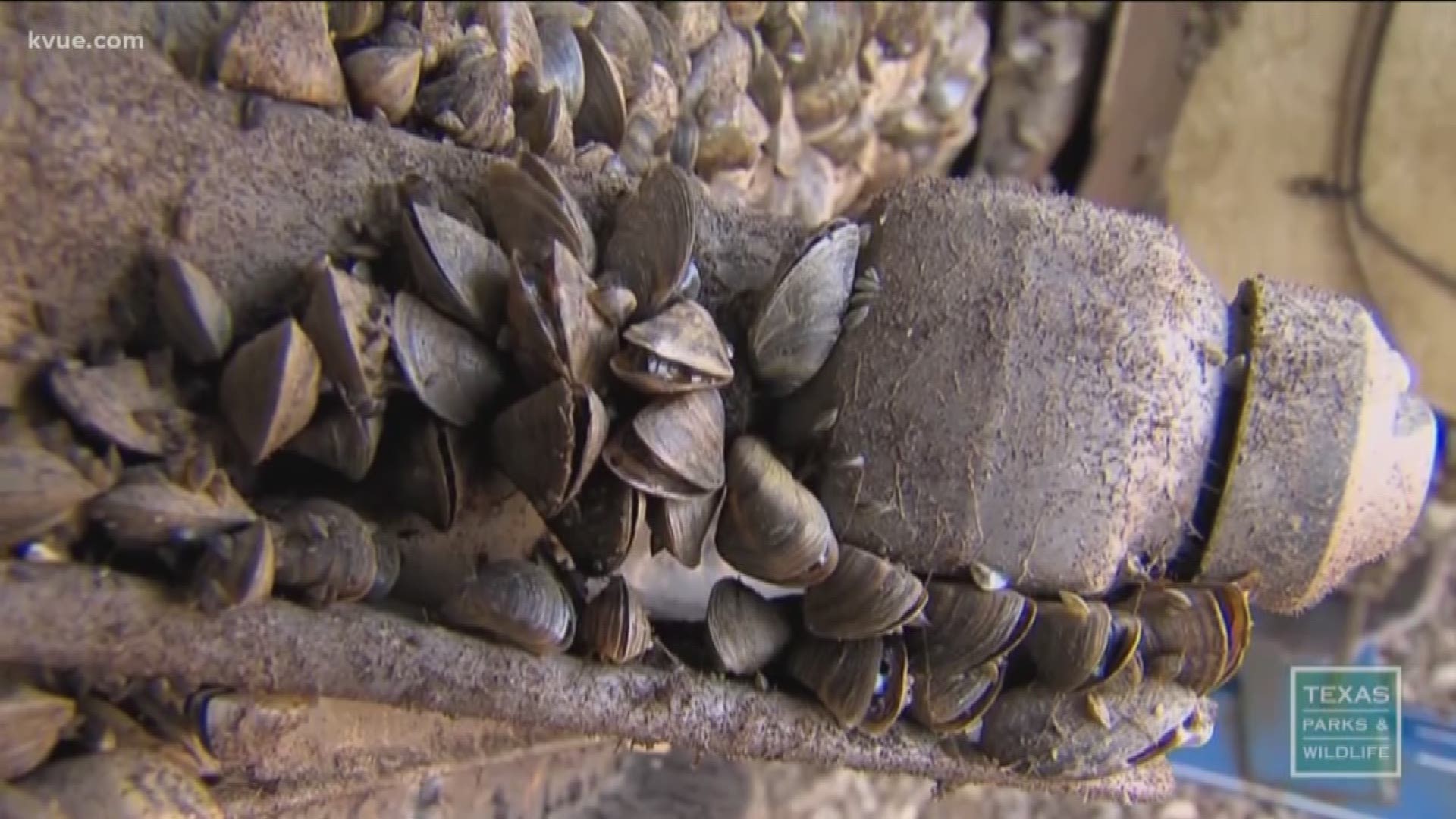 AUSTIN, Texas — A week after some Austin Water customers woke up to smelly, fishy water, crews are still flushing lines to make it go away.

Zebra mussels in Lake Austin got inside a raw water pipeline and then died, releasing compounds into the water supply that changed its odor and taste.

The tiny creatures first arrived in Texas in 2009, according to Monica McGarrity, a senior scientist with Texas Parks and Wildlife Department's Aquatic Invasive Species Management.

It wasn't until June 2017 when researchers discovered zebra mussels in Lake Travis. Eventually, they spread to Lake Austin and then Lady Bird Lake.

McGarrity told KVUE it's unclear how long they had been in there because researchers found large colonies.

RELATED: Zebra mussels | Where did they come from and why are they an issue?

RELATED: Is there a solution to the zebra mussel problem in Central Texas?

The zebra mussels likely invaded Lake Travis by clinging on to a contaminated boat that wasn't properly cleaned, drained and dried before entering the water.

Jarret Barker, assistant commander with TPWD's Fisheries Enforcement, said it's against the law to not clean, drain and dry your boat after exiting the water.

"They need to drain the vessel of any water, and they need to dry the vessels so that they're not transporting water or organisms that require water to live from one water body to another water body," Barker said.

A person found to be in violation of the regulation can face a fine of no more than $500. But, it's rarely enforced, according to Barker.

"We don't have the number of enforcement officers to have somebody present at every boat ramp at every lake every day of the week," he said. "We haven't written a whole lot of citations on this."

In the past few years, game wardens have issued only a handful of citations, Barker said: one in the Temple area and one in the Tyler area. He's not aware of any citations issued in the Austin area.

"It's something that we point out to the public, but we're not necessarily writing a hard copy ticket where we expect somebody to pay a fine," Barker said.

Instead, the department's priority is education and awareness about the dangers of not properly decontaminating a boat.

"Aside from having a conversation with the boat owner, we can't do much about it. It does come down to irresponsible boat owners who allow those zebra mussels to continue to cling to their vessel," Barker said.

An adult female zebra mussel can produce at least one million eggs in a year, according to McGarrity. All it takes is one boat to spread zebra mussels to an uninfected lake or river.

"Check everything. Check the anchors. Check any equipment that's been in the water," she said. "Make sure the boats that are stored in the water or marinas on lakes with zebra mussels aren't moved until they're properly decontaminated."

None of the Highland Lakes — Buchanan, Inks, LBJ, and Marble Falls — have tested positive for zebra mussels, McGarrity said.

"They're not going to move upstream," she said. "They don't move with birds, so a boater could take them up there."

There's not much we can do to eradicate the zebra mussels from our lakes, but it's important to work together to make sure they don't spread elsewhere.

"We need all these boaters to work with us," McGarrity said. "Because without the help of all of the boaters in Texas, we're not going to be able to stop their spread."