The Reddit poster, who claims to be a nurse at St. David's South, said that ICU beds were full and dead patients were taking up rooms because the morgue was full. 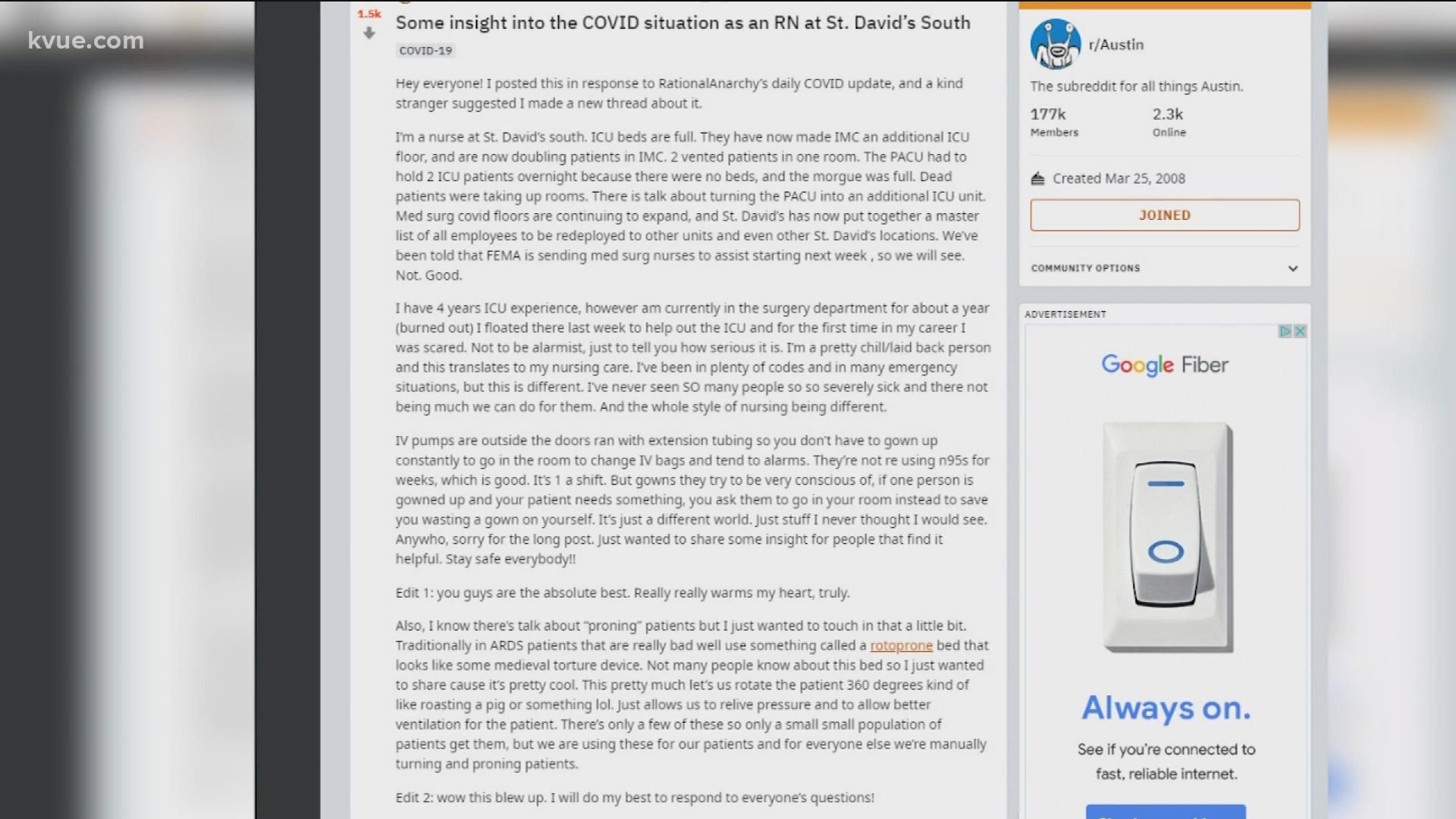 AUSTIN, Texas — A post that gained a lot of traction on Reddit chronicled the COVID-19 situation at St. David's South Austin Medical Center and painted a dire picture.

The Reddit poster – who has since deleted the post and claims to be a registered nurse at the hospital – said that ICU beds were full and dead patients were taking up rooms because the morgue was full.

The Reddit poster, who claims to have four years of ICU experience, also said "FEMA is sending med surg nurses to assist starting next week, so we will see. Not. Good."

A source familiar with the situation who reviewed the Reddit post confirmed to KVUE that the details depicted are accurate. Austin is pushing ahead with getting a refrigerated truck to town because “a lot of funeral homes are full,” according to the source. Bringing a refrigerated truck to the area is part of a more comprehensive plan, which includes the City’s Fatality Management Task Force, area hospitals and the Medical Examiner’s Office.

"Hey everyone! I posted this in response to a RationalAnarchy's daily COVID update, and a kind stranger suggested I made a new thread about it. I'm a nurse at St. David's south. ICU bed are full. They have now made IMC an additional ICU floor, and are now doubling patients in IMC. 2 vented patients in one room. The PACU had to hold 2 ICU patients overnight because there were no beds and the morgue was full. Dead patients were taking up rooms. There is talk about turning the PACU into an additional ICU unit. Med surg covid floors are continuing to expand, and St. David's has now put together a master list of all employees to be redeployed to other units and even other St. David's locations. We've been told that FEMA is sending med surg nurses to assist starting next week, so we will see. Not. Good. I have 4 years ICU experience, however am currently in the surgery department for about a year (burned out) I floated there last week to help out the ICU and for the first time in my career I was scared. Not to be alarmist, just to tell you how serious it is. I'm a pretty chill/laid back person and this translates to my nursing care. I've never seen SO many people so so severely sick and there not being much we can do for them. And this while style of nursing being different. IV pumps are outside the doors ran with extension tubing so you don't have to gown up constantly to go in the room to change IV bags and tend to alarms. They're not re using n95s for weeks, which is good. It's 1 a shift. But gowns they try to be very conscious of, if one person is gowned up and your patient needs something, you ask them to go in your room instead to save you wasting a gown on yourself. It's just a different world. Just stuff I never thought I would see. Anywho, sorry for the long post. Just wanted to share some insight for people that find it helpful. Stay safe everybody!"

According to Dr. DeVry Anderson, chief medical officer with St. David's South Austin Medical Center, the hospital has seen morgue space fill up and deceased COVID-19 patients have had to stay in their room while waiting for morgue space to clear. Anderson told KVUE they have not transitioned parts of the hospital to ICU-level, but they have moved ICU staff around to provide ICU-level care in the intermediate care (IMC) area for COVID-19 patients because the health status of those patients can deteriorate more quickly. However, Anderson said the hospital is open to making those changes to retrofit rooms if needed.

"We're committed, as we always have been, to our plan to utilize all available care space to include retrofitting other clinical rooms with equipment or with beds or with the staff needed to care for different levels of acuity," Anderson said.

Anderson clarified the IMC area typically has patients that are deemed more high-risk than what staff would normally like to see on a "typical ward floor," but not so high-risk that they need to be in the ICU. In terms of doubling up COVID-19 patients, Anderson said that does happen, but in relatively large rooms and only when looking to clean, turn over and/or clear out another room for one of the patients to be held there. Anderson said that usually takes a few hours at most.

According to Anderson, large morgue space is not common in modern or contemporary hospitals, thus sufficing the need to potentially – and briefly – house patients who have died from COVID-19 in their rooms while awaiting transport to another location, commonly a funeral home or another hospital with morgue space.

"It's helpful to give some historical context. I think in times past, older hospitals had actual large-scale morgues, like we might see historically on a TV show, whole floor. But that's not common in your modern or contemporary hospitals. In fact, most hospitals don't have morgue space at all," Anderson said. "Within our system, we at St. David's South Austin Medical Center are unique in that we have a morgue space, but it has two spaces in it. And so nothing like what we might have seen, you know, in the 80s or 90s in terms of these larger spaces. And so when those spaces are not able to be utilized, new patients who have expired will remain in their rooms until there's space to house them in those small spaces. And in some cases, we'll coordinate with other hospitals in the system to have those who have passed away transferred to other locations to be held."

Anderson confirmed to KVUE that St. David's South Medical Center has "certainly had patients that have remained in their room until there was clinical morgue space for them to be housed within our own hospital." He added, "and on some occasions, we've had transfers happen in between our hospital system, understanding that some of our hospitals don't have morgue space at all."

"And so we prepared to hold them and to house them," Anderson said. "Certainly nothing like the dramatic scenes that we've seen in New York or in California or some of these other places on the news. But with regard to what I just said, that is absolutely happening."

"Austin-Travis County Emergency Operations has a fatality management task force that is in close communication with our local funeral home and crematory directors, monitoring their ability to absorb a possible increase in fatalities due to COVID-19. In the event they are over capacity, Travis County and City of Austin are making plans to stand up additional, temporary storage capacity in the interest of protecting public health. Those plans have been in the works for several months. Preparations for a phased activation of our fatality management plan are currently underway. We are still working to finalize resources for an Alternative Care Site at the Austin Convention Center. We hope it will never be needed but we are preparing in case the hospitals need more capacity."

"The data we have currently with regards to deaths shows a recent significant increase in excess deaths, 23% above what is the expected number of deaths for this time of year," Pickett said. "So, with the recent surge in cases, we do expect to see a surge in deaths at the same time."

UT-Austin prepared a list of scenarios that would lead to a shutdown this fall. One trigger: a student dying of COVID-19.