While uncommon, an expert at Texas Parks and Wildlife says there's no reason to be concerned. 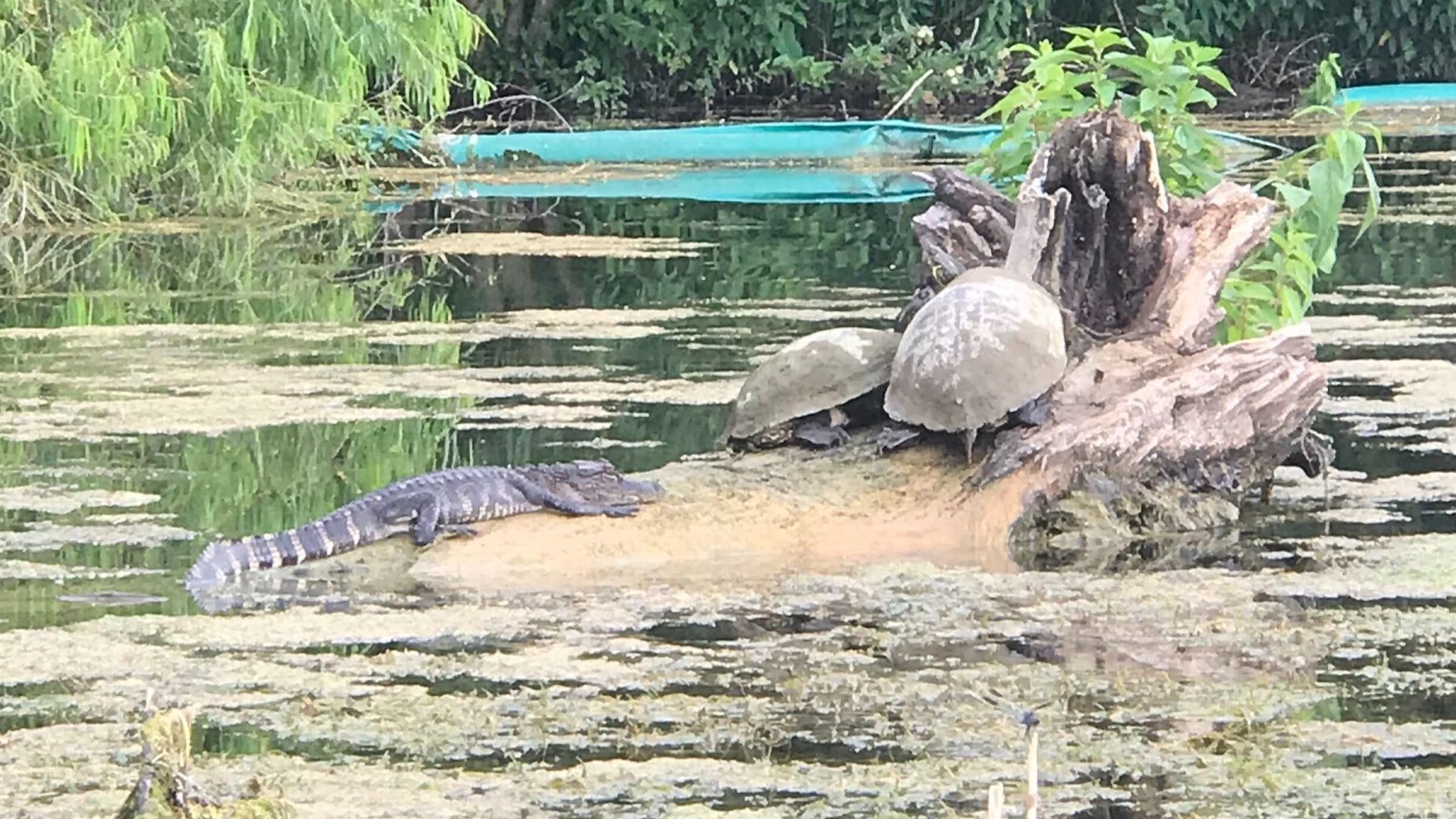 AUSTIN, Texas — Turtles and fish are commonly found in Austin's Lady Bird Lake, but it's not often you'll find an alligator basking on a log with some turtles.

The four-legged reptile caught Anna Eulo's eyes on July 6 as she and a friend kayaked near Peace Point just west of Longhorn Dam.

She said the alligator got back in the water as soon as her friend snapped a Live Photo of it on his iPhone.

Credit: Will Chesson
The alligator was spotted on a log in Lady Bird Lake just west of Longhorn Dam near Peace Point on Monday, July 6.

"It's not common, but I wouldn't say it's out of the ordinary, either," Texas Parks and Wildlife Department alligator program leader Jonathan Warner said.

Warner has an idea of how the alligator may have arrived in Austin.

"It's not impossible that it's made its way up the Colorado River or was maybe displaced due to some type of a flooding event. I would say more likely it was dumped by someone that had it as a pet," he said. "It does happen, unfortunately, sometimes where someone has one as a pet and gets a little bit too big for its aquarium, so it gets dumped into an area like this."

The alligator in the photo appears to be about 2-3 feet long, and it's not old enough to reproduce yet, Warner said. He doesn't expect it to stick around.

"Younger alligators, in general, in a lot of habitats don't have really tight home ranges, so they move around a lot," he said. "I wouldn't be surprised where the next time we get a good cold snap up there, it'll just kind of [move] its way down the river and head for a little bit of a warmer climate."

But if it does stick around, he said kayakers, paddleboarders and people walking their dogs along the lake shouldn't be too concerned. Reminder: It is not legal to swim in Lady Bird Lake.

"Alligators, by nature, are actually very timid, docile creatures. Even as adults they often go undetected in habitats that they're at. Obviously, like any wild animal, it's a good idea to just use common sense," Warner said. "Don't approach them. Don't try to feed them. Don't try to catch them or harass them in any way. Normally, everything works out great."

I spoke with an alligator expert at @TPWDnews to find out how common they are here and whether people should be concerned. pic.twitter.com/3Jpm3lNkQr

Eulo was a little freaked out when she saw the alligator, but it won't stop her from getting back on the water.

"I'm originally from the East Coast, too, so I've never even seen ... those animals are very exotic to me," she said. "It was very cool."

If you happen to find an alligator where you normally wouldn't expect to find one, report the sighting to your local county game warden.

The department has a nuisance alligator control program. If the alligator is deemed a public safety issue or if it has been fed and has lost its fear of humans, TPWD can remove the alligator.