Regents School of Austin versus Brentwood Christian has won the honors of KVUE's Game of the Week. 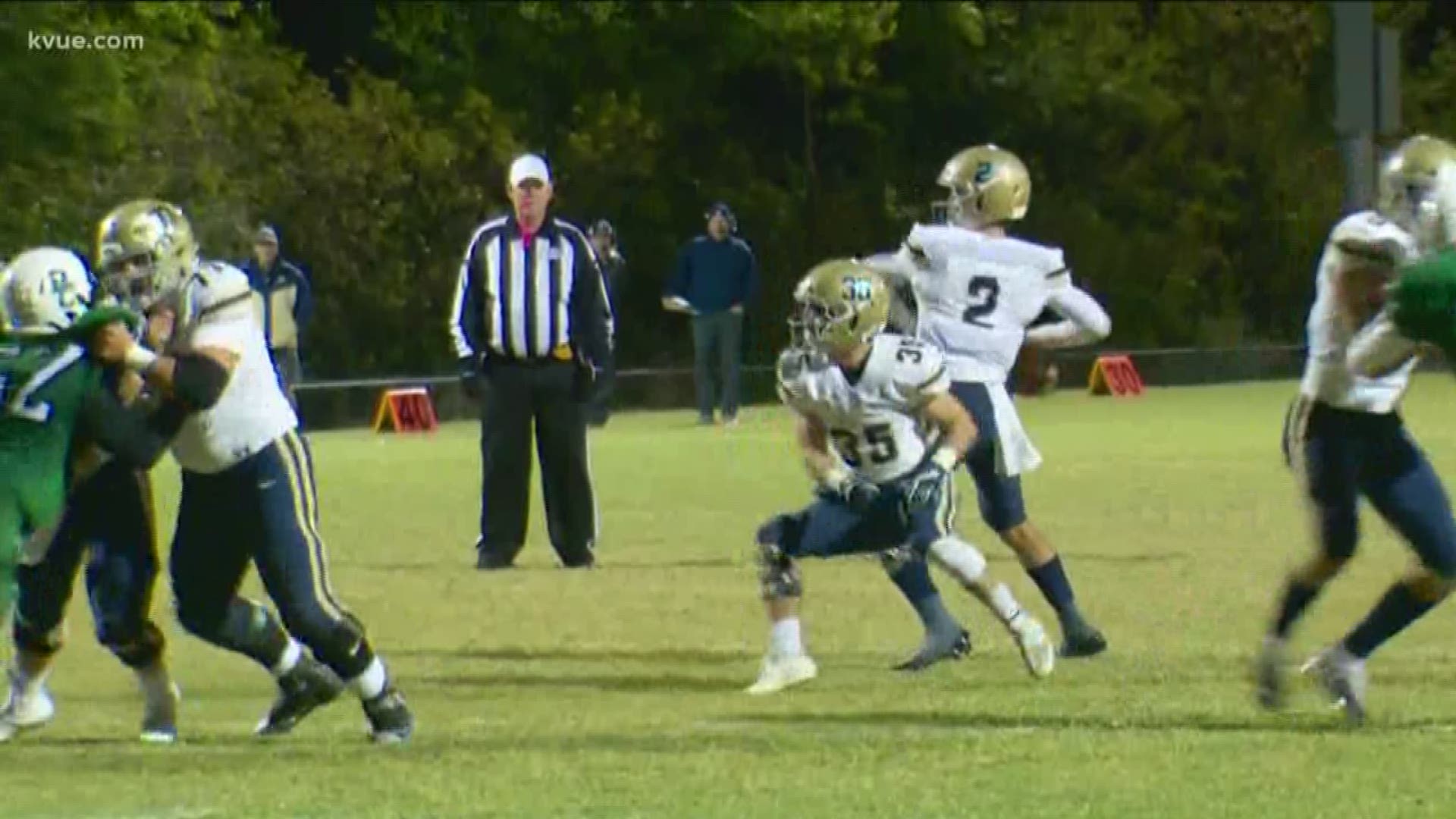 AUSTIN, Texas — It's week nine of high school football, and that means another pair of schools' chance to be KVUE's Game of the Week!

KVUE's Jake Garcia went to Regents School of Austin on Tuesday. Here is how the school is prepping for this matchup.

Until another team proves otherwise, Regents will be the team to beat out of District 3.

Not only have the Knights won the district the past three years, they’ve also appeared in three straight TAPPS state championship games.

The biggest hurdle to a fourth straight district crown presents itself on Friday in Brentwood Christian.

“Coach Caffey has come in and said some version of ‘We’re not going to wait five or 10 years to be successful, we’re going to be successful now," Regents head coach Beck Brydon said of his opponent. “If you just watch the way their kids play, their kids play hard, they’re tough, they’re gritty, they’re bought in. They’re not small, these kids lift, so they don’t look like a lot of private school kids do. These are football players we’re playing.”

“What we’ve seen on film, they’ve dominated teams all year so we’re looking for a battle on Friday. We’re going to go out and play our hardest,” senior quarterback Wilson Long said.

On the Regents side, Long has been the focal point of the offense since his sophomore year.

Brydon lauded his play-making ability and also the intangibles he brings.

“He’s a locker room guy, he loves the weight room. All the hard-working, trench, get dirty, roll-up-your-sleeves stuff that you might see with linebackers or offensive lineman, that’s Wilson Long. He’s earned the respect of everybody on the team I believe,” Brydon said.

Long surely will be playing at the next level on Saturdays. He is already netting offers from Rice, Princeton and Harvard.

“(Long has) got bigger visions and longer-term dreams than just football and so where he goes to school is really important. That being said, I believe he’s a Power 5 quarterback,” Brydon said.

While Brydon was eager to talk up his quarterback, he was less inclined to talk up the showdown with Brentwood Christian. It’s a matchup that’s a district championship game of sorts, but he cautioned his players about overhyping it.

“Yes, there’s a district lead attached to this, which is always important to realize and understand, but we don’t overplay it,” he said. “Inevitably, if we overplay something, kids don’t show up the following week. Every week’s important.”

Here's some insight into the Bears' program this week: one of the cool stories about Brentwood Christian is that they've only had a football program for five years. In that time, they've been able to work their way up to and become one of Regents' biggest opponents. Both teams are competing for the district in 2019 and they know what each other brings to the field.

"They have a dynamic quarterback themselves and they have a very strong defense and so we scored a lot of points last year until we played them," Brentwood Christian head coach Stan Caffey said. "Their linebackers are really good and they have a great quarterback. They just have a really solid team all the way around."

KEEP TRACK OF THE SCORE HERE:

Here's the winner of KVUE's Big Save of the Week – Oct. 4