The Centers for Disease Control and Prevention recently said it was now the most common variant of COVID-19 in the U.S. 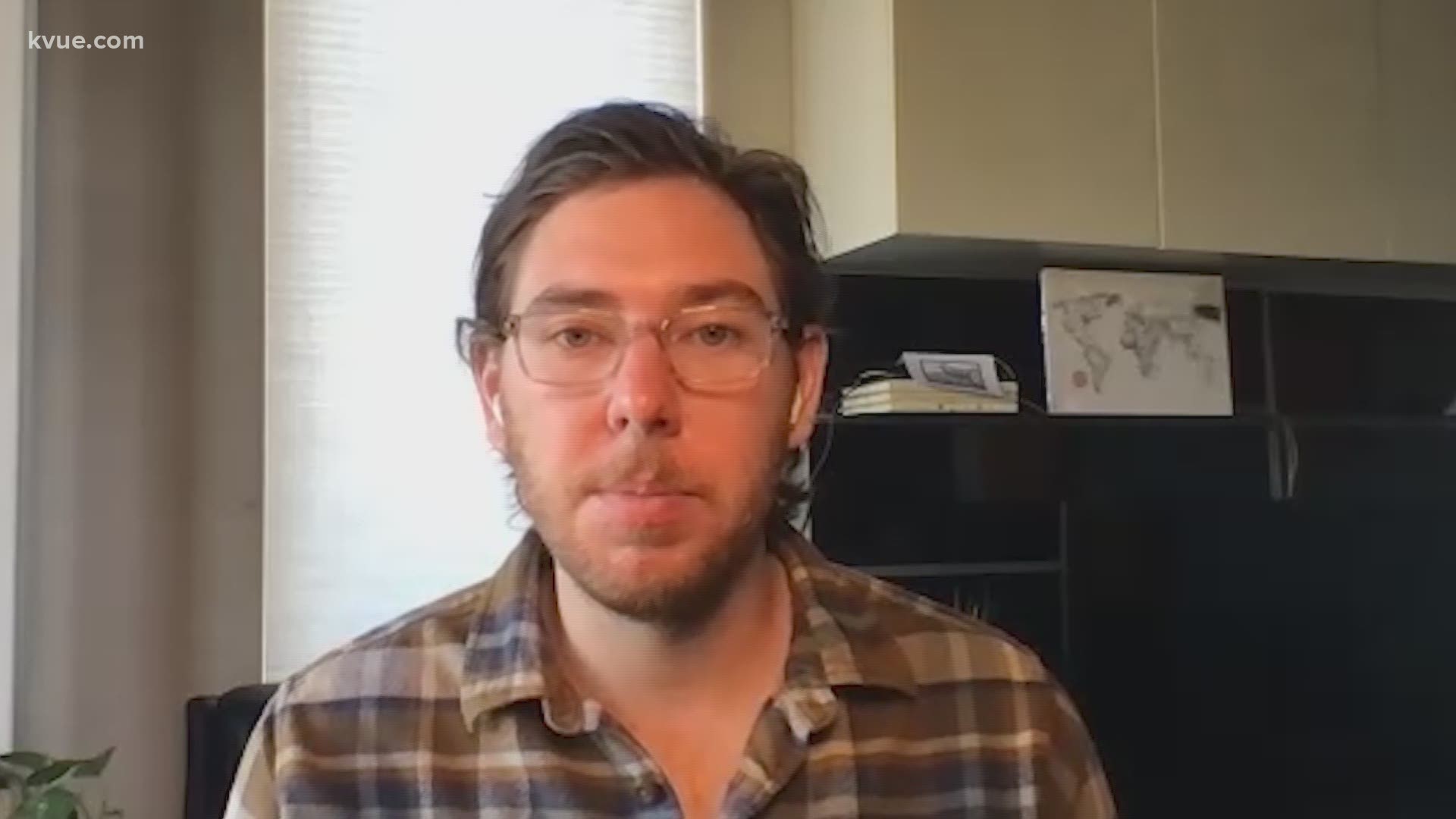 AUSTIN, Texas — The Centers for Disease Control and Prevention has announced the variant of COVID-19 that originated in the U.K. is now the most common of the strains circulating in the U.S.

It's an announcement that comes just weeks after Houston Methodist announced that a study shows COVID-19 cases with the same variant, B.1.1.7, are doubling weekly in Houston.

"The B.1.1.7 variant Is concerning to public health officials right now because there's evidence that it has increased transmissibility compared to the previous strain that was really dominating transmission in the U.S. before," Dr. Spencer Fox, the associate director of the University of Texas at Austin's COVID-19 Modeling Consortium, told KVUE on Wednesday. "It also has shown increased mortality. And so those two factors combine to potentially more riskier outlook for transmission in the future."

He explained that researchers with UT predicted the variant would be dominant sometime toward the end of March and into early April.

He also discussed the modeling exercise his team conducted to see how COVID-19 cases would look in the spring and summer of this year for the Central Texas region.

"We were concerned about reopening of Texas, the impact that the variant might have. And we also wanted to estimate the impact that vaccinations had. And what we found was that any one of those individual scenarios could result in increased transmission, but wouldn't catastrophically affect health care capacity. It wouldn't lead to a surge that would strain health care capacity," he said. "The combined impact of the variant alongside reopening of Texas could lead to a large spring surge, similar to what we saw in the winter in the greater Austin region."

Overall, his overarching message is that the public isn't out of the woods yet when it comes to COVID-19.

"Even though vaccinations are rolling out at an increasing clip, we still don't have enough immunity in the population to prevent a major surge. And so it's still important for people to take precautions, keep wearing masks and staying distant. And if they do so, then we'll slowly glide into the summer and we might have a pretty normal summer," he said.

KVUE also spoke to Ilya Finkelstein, a professor of molecular bioscience at UT. He explained that the vaccines that have been distributed so far still should be enough to fight the B.1.1.7 variant.

"Our immune systems produce a lot of antibodies that target different parts of a critical component of the virus, and the virus has not yet learned how to evade all of the antibodies that we produce, just a very small subset. In that sense, vaccines are still very, very effective against this variant," he said.

Finkelstein also discussed the topic of the younger population being infected with the B.1.1.7 variant more often than others, something CDC Director Dr. Rochelle Walensky said was occurring.

"The reason B.1.1.7 is surging in the younger population is twofold. First, they are the last in line to get the vaccine due to the prioritization that's in place in most places in the United States. And second, there is an easing of restrictions throughout the country. And people are just fed up with being stuck at home, so people go out, they mingle. B.1.1.7 spread out among those who are not yet protected," he said.

He added that when it comes to studying these variants, there are two parameters they're looking at.

"One is transmissibility. Another is lethality on a per-case basis. B.1.1.7, we now have the evidence again from the U.K. that B.1.1.7 is more transmissible and significantly more lethal. So unfortunately, it hits both of those points," he said.

Overall, Finkelstein said generally, the more vaccines that are administered, the better off the public will be.

"We just need to surge vaccines to people. We need to reach out to hesitant communities and populations, to people who are younger, and just get everyone as vaccinated as quickly as possible. That is our protection," he said.