VERIFY: Can companies adjust vaccines for COVID-19 variants without approval?

The COVID-19 vaccines might need to be updated to better target variants one day. Would companies be able to debut them as soon as they are ready? 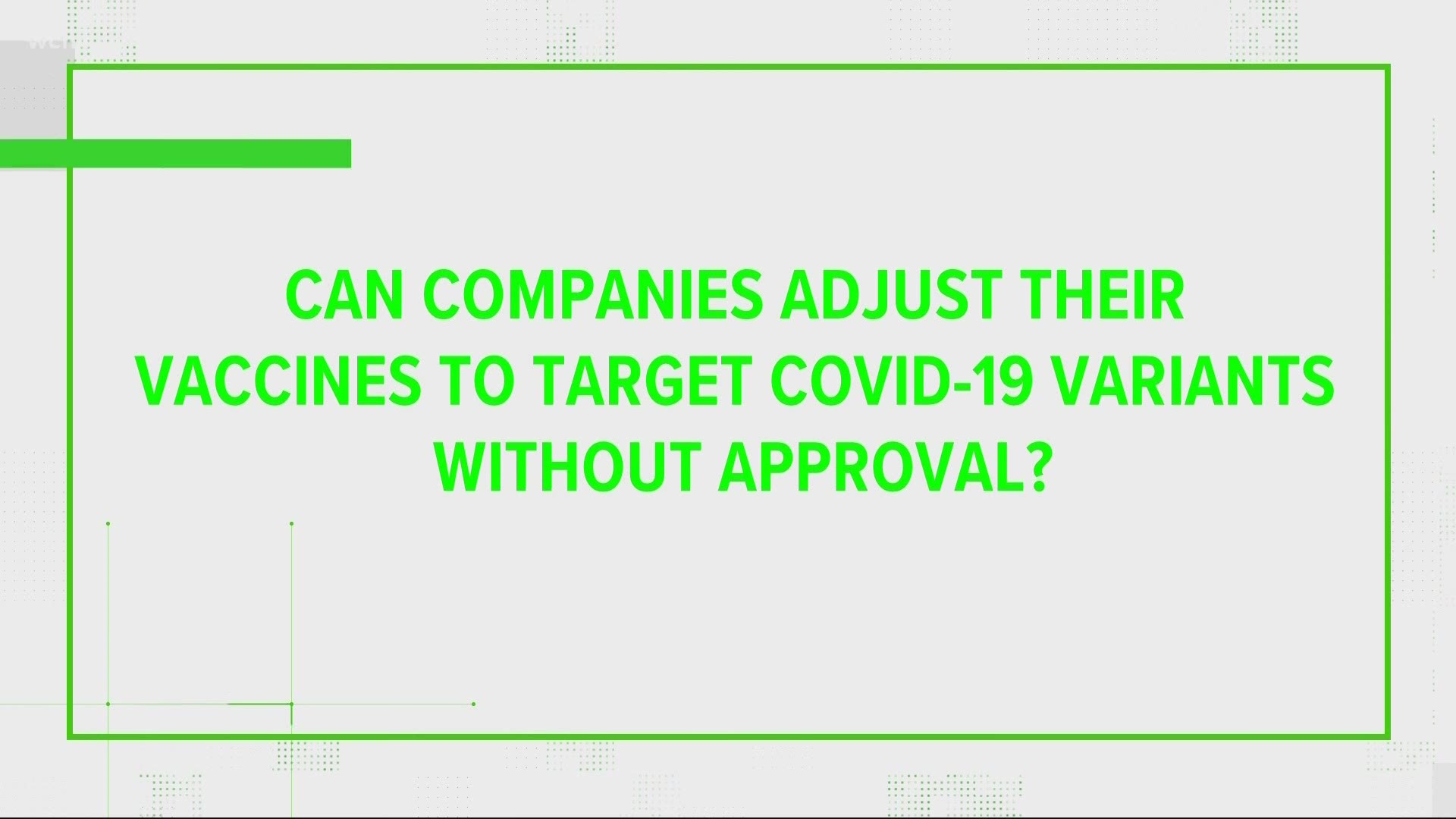 CHARLOTTE, N.C. — While health officials assure the current COVID-19 vaccines are safe and highly effective against the known variants of concern, it is possible that, one day, companies might need to adjust them if any gaps in protection arise.

The prospect has some online wondering how that process would work, and if necessary, just how swiftly would companies be able to roll out these new formulas? Could they just debut them as soon as they are ready?

Can companies adjust their vaccines to target COVID-19 variants without approval?

No, under current FDA guidance, companies would not be able to change vaccines to better target variants without getting approval from the agency first.

Calling all experts. If vaccines are needed to be tweaked for new variants now much extra testing do they have to go through? Thinking of nRNA vaccines and the anytigen protein Novavax? Will it be 1,2,& 3 trials again?

So how would debuting an adjusted vaccine work?

Dr. Katie Passaretti, an infectious disease specialist with Atrium Health, says there would have to be some checks on the process.

"It's not like flipping a switch," Passaretti said. "It's a combination of science-takes-a-little-while and making sure that the changes are safe and they are only really to strain content."

In February, the Food and Drug Administration released updated guidance on this topic, stating that companies would have to request an amendment to their initial emergency use authorization in order to adjust vaccines for variants.

While it indicates new rounds of trials as rigorous as what preceded the vaccine's EUA would probably not be needed (for example, the guidance states studies could be conducted in a single age group, with results extrapolated to other age groups), there would have to be data provided on how well the modified vaccine works and why there is an actual need for it.

Companies would also have to show the manufacturing process is similar to the original vaccine, and if it is not, they would have to explain why.

Nick Davidson, Senior Deputy for Public Health for South Carolina's Department of Health and Environmental Control, says, after that, there could even be an added lag time to rolling out that new vaccine.

"It will be time-consuming to ramp up the production of any alterations in a vaccine that are made," Davidson said.

Have a relative or friend in another state and want to know when they can get vaccinated? Visit NBC News' Plan Your Vaccine site to find out about each state's vaccine rollout plan.