Of the nearly 145,000 people who are ready for their second dose, less than 1% are overdue. 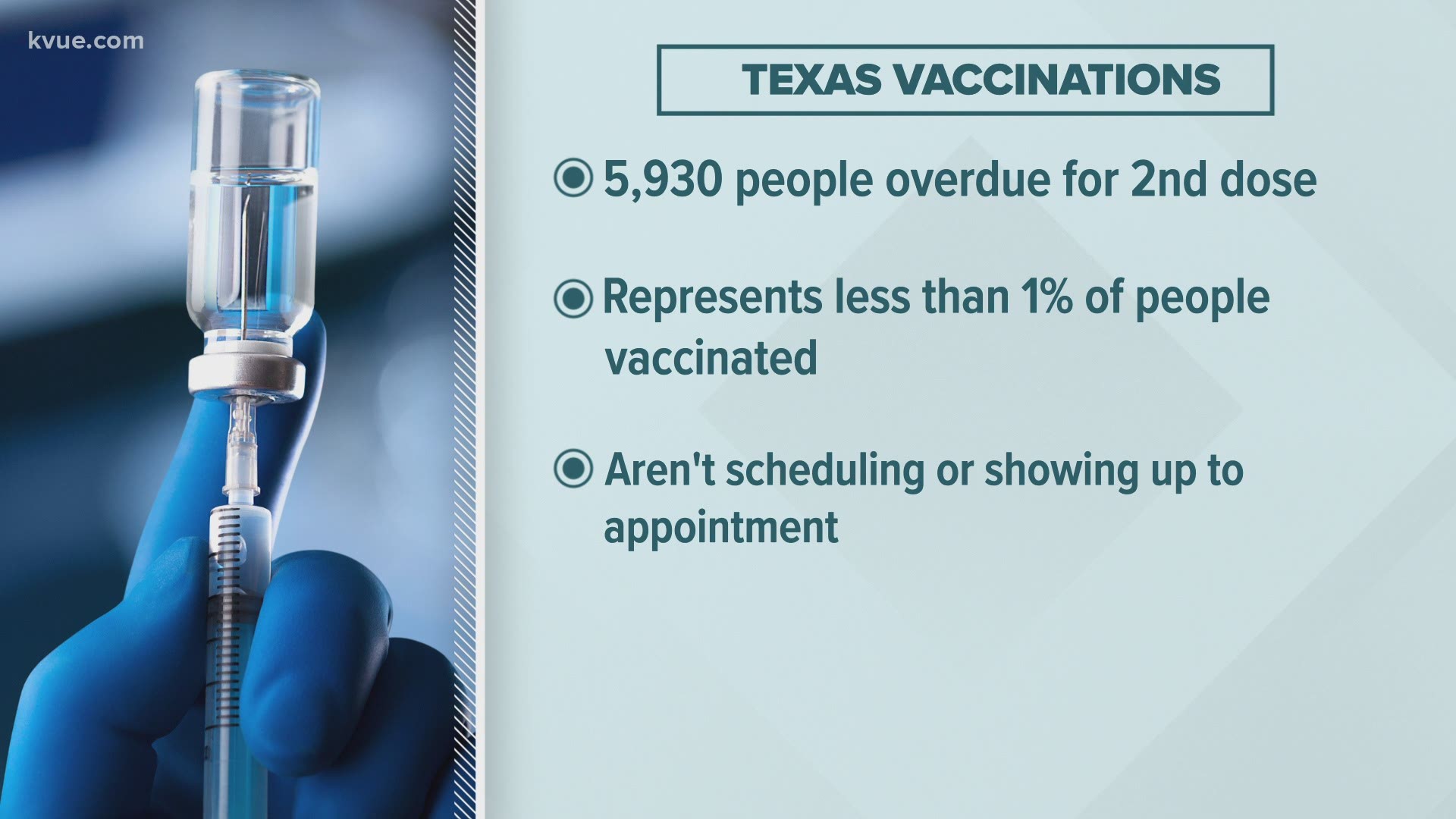 AUSTIN, Texas — Currently in Texas, it's now time for about 145,000 Texans to get their second doses of the COVID-19 vaccine. However, according to data from the Texas Department of State Health Services, nearly 6,000 – or 0.31% – of them are overdue.

According to the DSHS, these 6,000 people are now past the six-week mark recommended for receiving the second dose. Now, health officials are encouraging patients to get their booster doses on time because they are important for boosting immunity.

"We recommend getting the second dose where you got the first, though that isn't a requirement," a DSHS spokesperson told KVUE. " Because providers can order an amount of second doses equal to the number of first doses given to arrive at the appropriate time, it will be simplest for everyone involved to go back to the same provider. We're working with them to remind them of how and how many they can order."

Almost 6,000 Texans are overdue for their second dose of the #COVID19 vaccine, according to @TexasDSHS. That's less than 1% of people vaccinated.

"We definitely want people to get their booster doses on time because they are important to boosting your own immunity." -DSHS @KVUE pic.twitter.com/4DMuleRXFf

The DSHS noted that the main reason people are overdue is because patients are not scheduling or showing up to second appointments with their providers. A spokesperson said it is not due to a lack of vaccine availability from providers.

KVUE reached out to APH to find out if it is seeing any overdue patients. A spokesperson said it's not currently a big issue in Austin, either.

APH said it received an initial allocation of 1,300 first doses in the last week of December. It began distributing second doses last week.

"We have experienced some no-shows, but we do not have complete data currently available for these second doses," the spokesperson said. "Since that initial vaccine allotment, APH has been receiving about 12,000 doses each week, beginning the week of Jan. 11, 2021. No one who has received doses since that week is overdue for their second vaccine."

RELATED: How to get your second COVID-19 vaccine dose from Austin Public Health

APH said that if you received your first dose through them, they will reach out to you so that you can schedule your second vaccine appointment.

Zombies in Round Rock: Road closures expected for 'Fear the Walking Dead' filming