APH will only release appointment slots on Tuesdays and Thursdays starting this week. 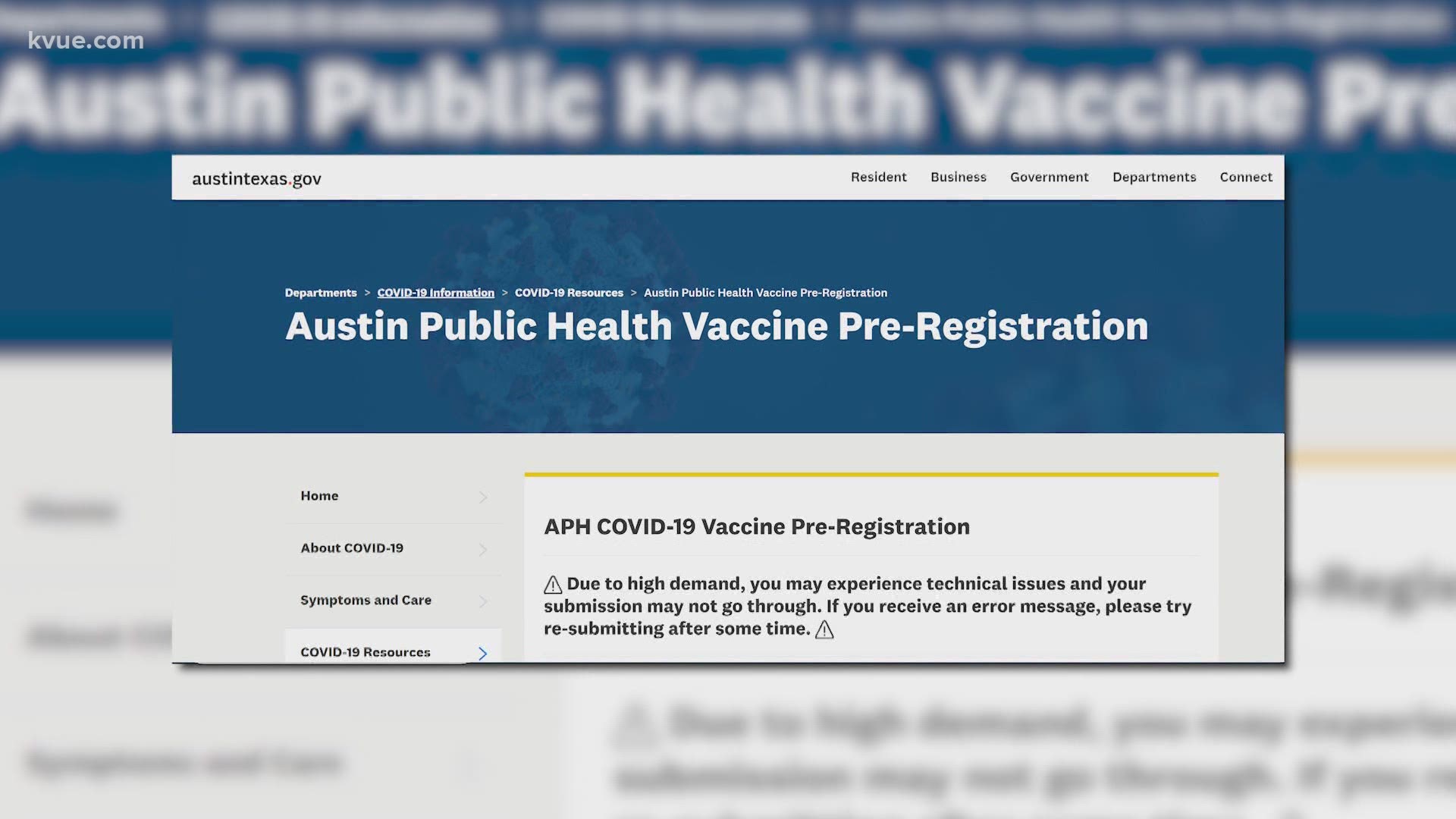 AUSTIN, Texas — In an attempt to cut back people's time searching for an open appointment slot to get a COVID-19 vaccination every day, Austin Public Health will now only post appointment slots on their online portal on Tuesdays and Thursdays starting this week.

APH Director Stephanie Hayden-Howard made the announcement during the Travis County Commissioner's dual meeting with Austin City Council on Tuesday after hearing people were frustrated with the process of signing up for the vaccine.

"If things change and we get more vaccines, then of course we will release more appointments," Hayden-Howard said.

APH will not announce when they release appointment times, so people eligible to receive the vaccine, groups 1A and 1B, will have to continue to check throughout the day on those days.

However, to assist those who are more vulnerable, including elderly individuals over 80 years old, APH will send an email to them two hours before appointments are posted, letting them know they can register soon.

"One of the reasons why we are going with the age of 80 is because the goal is to continue to drive down that volume of folks that appear in the hospital and die," Hayden-Howard said.

Councilmembers pushed for better ways to communicate to the public and worried this restriction on appointment sign ups would only cause the site to crash more.

More than 500,000 people registered on APH's portal to get the vaccine, with 35% of them actually eligible for the vaccine. Eleven-thousand of them are also elderly individuals older than 80 years old.

"I just still wish that we could get to a system where there was some kind of automated waitlist and you were contacted and those spots were open for that group rather than sending 500,000 people on Tuesdays and Thursdays for the system to crash," Austin Councilwoman Alison Alter, District 10, explained on Tuesday.

Other councilmembers encouraged the city to work with internet technology experts to create a system where emails would get sent out when an individual received an appointment slot.

This would eliminate the time people spent searching for one themselves.

City and county leaders understand people still have a lot of questions and confusion. That is why they also approved a new call center to answer COVID-19 vaccine questions. The elderly, or anyone who does not have internet, could also use this line to get assistance signing up for an appointment.

The call center is not ready, however. Mayor Adler is expected to speak with a consultant on Thursday, Feb. 4 about getting the program set up.

As APH navigates how to better communicate with the public, they made it clear it will take time to get everyone eligible signed up.

The department is only receiving 12,000 doses of the vaccine each week. At this rate, it could take about four months to vaccinate every eligible person signed up.

"The goal is to continue to get those vaccines out in a fast, efficient, and effective way," Hayden-Howard said.

To pre-register for the vaccine through APH's vaccine portal, visit this website.

Fostering in Central Texas: Family shares their perspective on giving a home to a child

Historic Johnson City hotel restored and open to the public