About 10% of Texans age 16 and older have had the first dose of the vaccine, according to the Department of State Health Services. 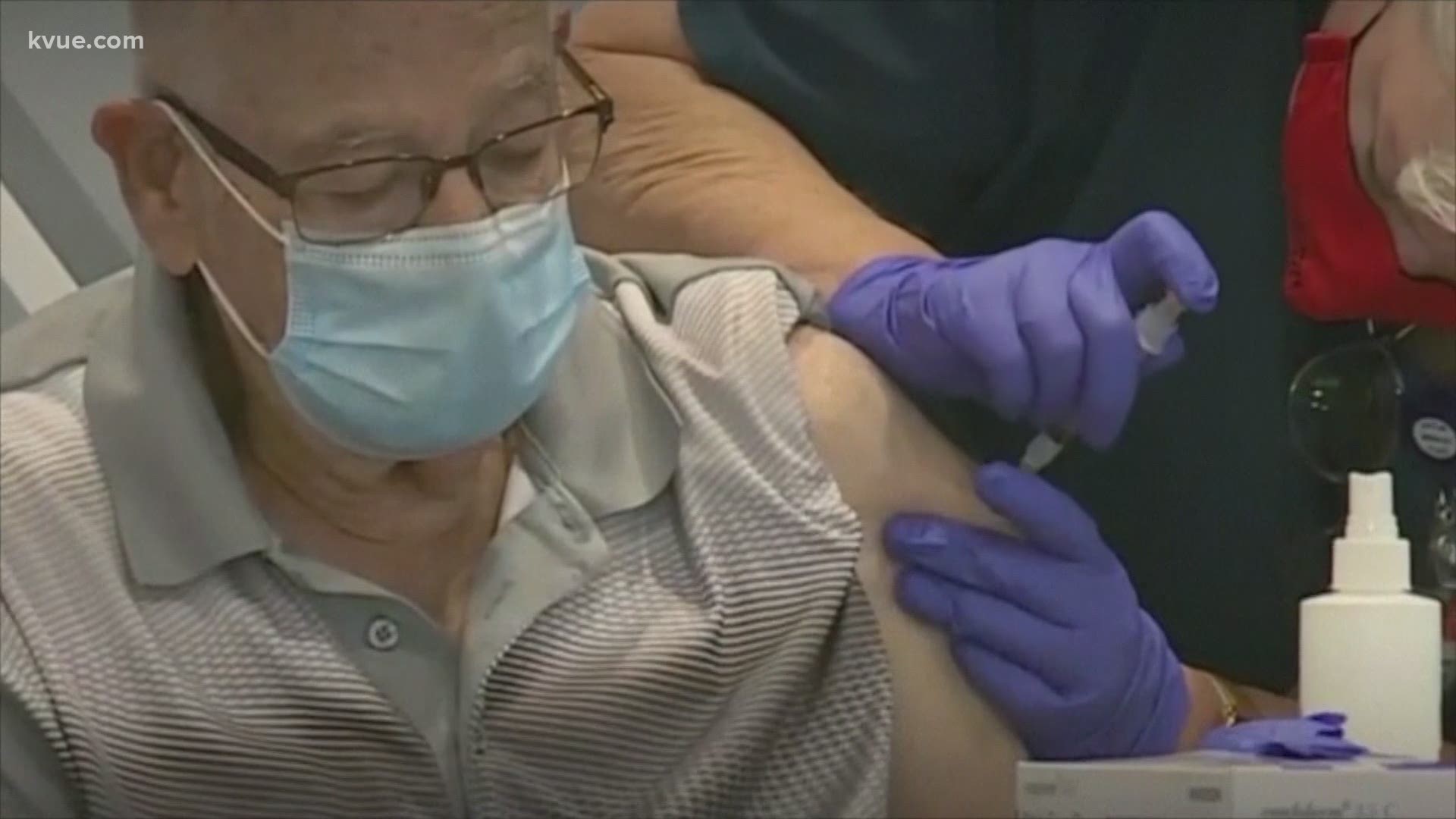 AUSTIN, Texas — Vaccines have made it into the arms of more than 2 million Texans, according to data from the Texas Department of State Health Services.

The CDC reports Texas, compared to other states, ranks second for the total number of COVID-19 shots administered.

But that doesn’t mean it’s happening fast enough. Thousands of Texans who qualify for the vaccine say they still can’t get it.

“I’ve been waiting a long time and, at this point, I don't think I'm going to get it any time soon,” Webberville, Texas, resident Robert Castillo said.

Castillo is past the point of frustration. But, as of now, most Texans are in his shoes – they still haven’t been vaccinated.

The KVUE Defenders reviewed data from the Department of State Health Services. Numbers from Thursday show Texas providers have given the first dose of the vaccine to about 10% of Texans 16 and older. Locally, it's not any better: Only 8.5% in Travis County, 8.5% in Williamson County and 9% in Hays County.

Credit: KVUE
10% of people in Texas age 16 and older have received the first dose of the COVID-19 vaccine. In Travis, Williamson and Hays counties, it's even less.

“I feel that the people that are in charge have failed us because … here we are at this late stage and we still don't have anything really working well for… Central Texas,” Castillo said.

Problems with the process

University of Texas public policy expert Don Kettl agrees that the vaccine rollout process hasn’t been as smooth as it could have been, especially with almost a year to plan.

“Right now, we've got a situation that's not working very well,” Kettl said. “It's a situation full of lots of growing pains.”

One of those growing pains is providers failing to use all available doses of the vaccine.

Of nearly 4 million vaccines the state has shipped to providers, they’ve only administered about 3 million, according to DSHS data from Thursday.

That means about 27% of the vaccines in Texas are sitting unused.

Credit: KVUE
About 27% of all available COVID-19 doses in Texas have not been used, according to data from DSHS.

“It's a matter of making sure that the vaccine that we have gets into people's arms,” Kettl said. “And, right now, there are too many doses that are sitting around that are, at this point, not getting into people's arms fast enough.”

Another problem is wasted doses of the vaccine – 1,751 doses, according to DSHS data.

That’s either because the vaccines expired, were stored improperly, spoiled or other reasons. Those wasted doses could have helped Texans like Carolyn Jacobs’ husband, who still can’t get the shot.

“You would like to see these vaccine providers using every single dose?” KVUE Defenders investigative reporter Brad Streicher asked.

“Every single dose,” Jacobs said. “Why waste any?”

Droves of seniors have contacted the KVUE Defenders saying they aren’t good with computers, or simply don’t have one, which makes getting the shot almost impossible.

“It's senior citizen illiteracy,” Jacobs said. “I could use a computer, but basically. And then I personally need someone to talk me through what have I done wrong; how do I change it? And that's what's not been working at all.”

That might explain why State data shows more Texans who are younger than 65 have been vaccinated than those who are 65 and older.

“And these, of course, are high-priority individuals in terms of stopping the spread of the virus at this point,” Kettl said. “So that’s a problem.”

DSHS officials said on a webinar Thursday they’re working to come up with plans to reach more elderly Texans faster.

"Some of these could be setting aside a specific number of doses for our seniors, serving them during special hours, helping them move more quickly through the line with a fast track lane or taking vaccine directly to them through the EMS providers or Meals on Wheels like they're doing successfully in Corpus Christi and San Antonio," Chair of the Expert Vaccine Allocation Panel Imelda Garcia said.

The KVUE Defenders asked the Department of State Health Services for an interview multiple times, but the agency refused. Instead, Garcia answered our question of how the agency feels the process is going during that news conference on Thursday.

"I'm a firm believer that we can always do better," Garcia said. "So we continue to strive to improve each and every week our allocations across the state because we can do better. And we know that."

Kettl said all the problems we’re seeing – poor communication, lack of supply, unorganized distribution and more – amounts to a failure.

“For months now, we've known that we're going to need a strategy for getting it from the plants of the vaccine manufacturers into people's arms,” Kettl said. “Our planning on this, frankly, is just falling short and it's fallen short at pretty much all levels of government.”

And Texans say the failure is putting lives in jeopardy. That’s what Robert Castillo told us, after saying he expected more from a state with such a tech-savvy capitol.

“With all the technology we have in Austin, Texas, it seems strange that we couldn't set up some form of access for everybody and not have to keep calling and trying to find another place to register in hopes that you will be called,” Castillo said.

One of the biggest questions now is when the DSHS will authorize healthcare providers to start vaccinating people in the third group, 1C. State officials haven’t given a timeline for that.

And we also recently found there are nearly 6,000 Texans who are overdue for getting their second COVID-19 shot.