The mayor said the pandemic had highlighted racial disparities in Austin that must be addressed. 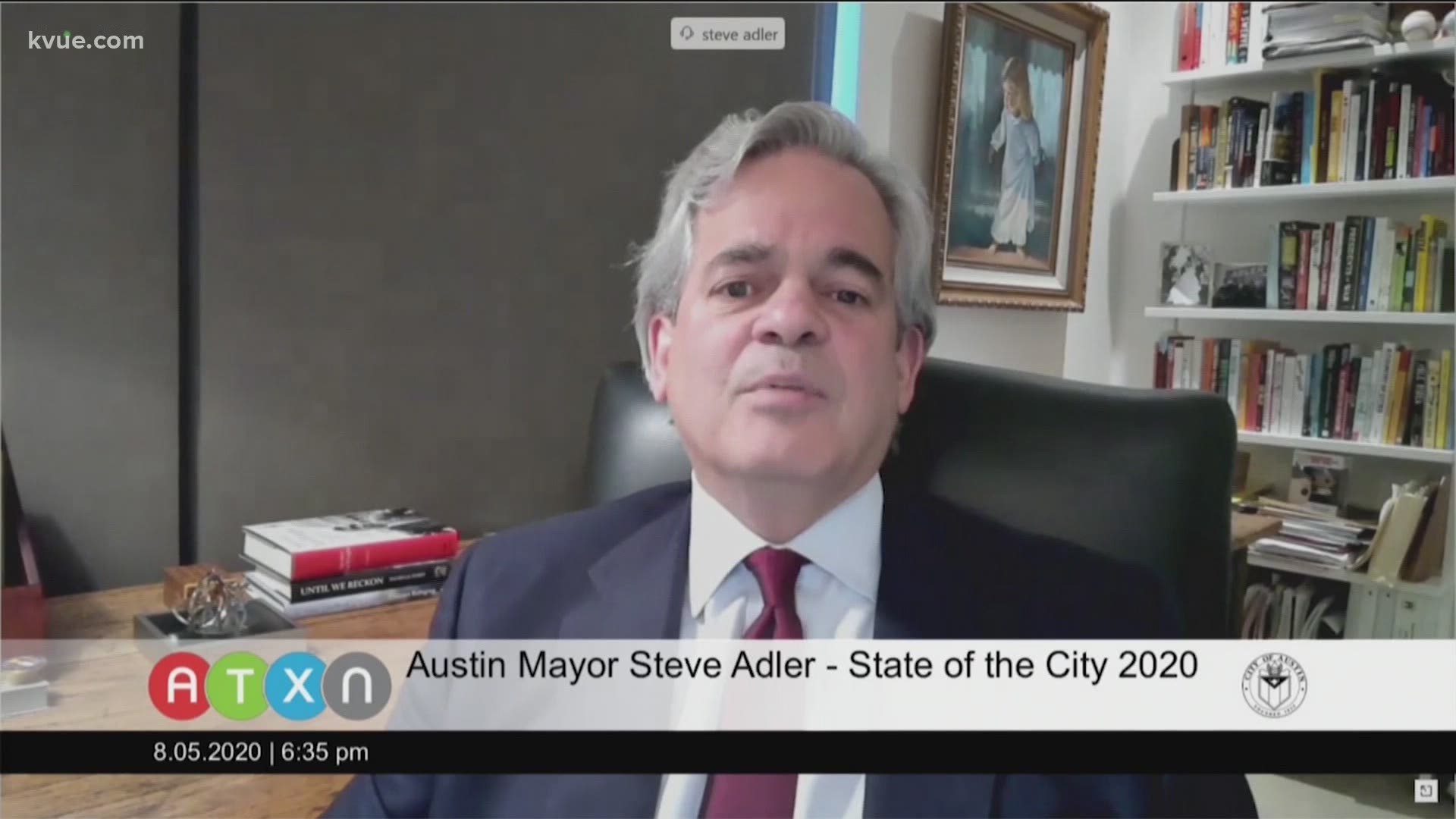 AUSTIN, Texas — In his State of the City address on Wednesday, Austin Mayor Steve Adler opened by saying the city is “anxious, troubled and hurting” but also hopeful after a difficult year.

In a speech addressing the COVID-19 pandemic, homelessness, race and policing issues, Adler urged residents to join a “disruptive recovery, seizing the moment to rebuild in a just and equitable way.”

“That’s better than a surge – but still dangerous,” he said. “The virus is real and the infectivity in our community is still too high. You want to open businesses and schools? Drive down the infection rate further than we are now.”

Infectivity in our community is now around 10%-15%, when it should be around 5%, Adler said.

He expressed concerns the University of Texas was considering gathering 25,000 people for football games this fall.

“I hope they don’t really try to do this,” he said. “I’m not sure anywhere in the world are such groups gathering, even in places with virus infection levels lower than ours.”

The mayor urged the U.S. Congress to pass CARES Act 2 to help the City provide more money for programs to mitigate the economic impact of the crisis.

Adler said both the pandemic and homelessness had highlighted racial disparities that need to be addressed in Austin. Black and Latinx Austinites are getting infected and dying at higher rates than their white neighbors, while around 38% of those experiencing homelessness are Black, he said.

After a Save Austin Now petition aiming to reinstate a ban on homeless camping was deemed insufficient to make November ballots, Adler said the City was looking beyond “cosmetic fixes.”

On the issue of policing and the next City budget, the mayor expressed his support for removing certain elements from the Austin Police Department budget and putting them into a transition category, containing $100 million of elements currently in the APD budget. Adler would like to move any overtime reserves funding into mental health intervention and increasing the capacity of EMS.

He said his office supports only authorizing expenditures out of the police budget and the transition budget for six months before reviewing.

Alder does not believe APD’s November Academy class can go forward as planned and said the Academy curriculum lacks enough confidence in the community. He wants City Council to examine the appropriate force levels within the police department, saying APD needs “a champion for change” within its leadership.

“The discussion we’re having in Austin about trying to find the best ways to provide for public safety is the same as is happening all over the country,” said Adler. “We need partners and advisors in this search that are open to exploring and building on new ideas.”

The speech also included a pitch for Capital Metro’s Project Connect plan, Adler saying it will bring more frequent and rapid transportation to jobs, education and health care for tens of thousands of Black and Brown households.

“We must acknowledge that major transportation investments in our past have done more to deepen inequality, to segregate rather than connect, to displace rather than benefit,” Adler said. “We must learn from that painful past and ensure we do not repeat those injustices.”

The mayor said inequalities in Austin reflect “a shameful combination of racist policy, compounded by decades of inattention and disinvestment by Austin’s privileged, mostly white leadership over the ensuing generations.”

He called on Congress to develop and execute a national program of restitution for descendants of slaves and for the City Council to begin “planning a pathway to atonement and restitution.”

“Let’s do big things,” Adler concluded. “Let’s end homelessness. Let’s bring real mobility to Austin. Let’s reimagine how we keep one another safe. Let’s address race and do something about correcting centuries of injustice because it is the fundamental injustice that fuels so many others.”

#ATXSOTC thread:
So here we are now, confronting challenges unlike anything we’ve ever seen before. Where do we begin? In times of such great uncertainty, what should be our guiding light? I think we begin with -- and look to -- “justice.”