When you get a prescription filled, you trust what you receive from the pharmacy is safe. But one Austin woman was given a dose so much higher than her doctor prescribed it almost killed her. 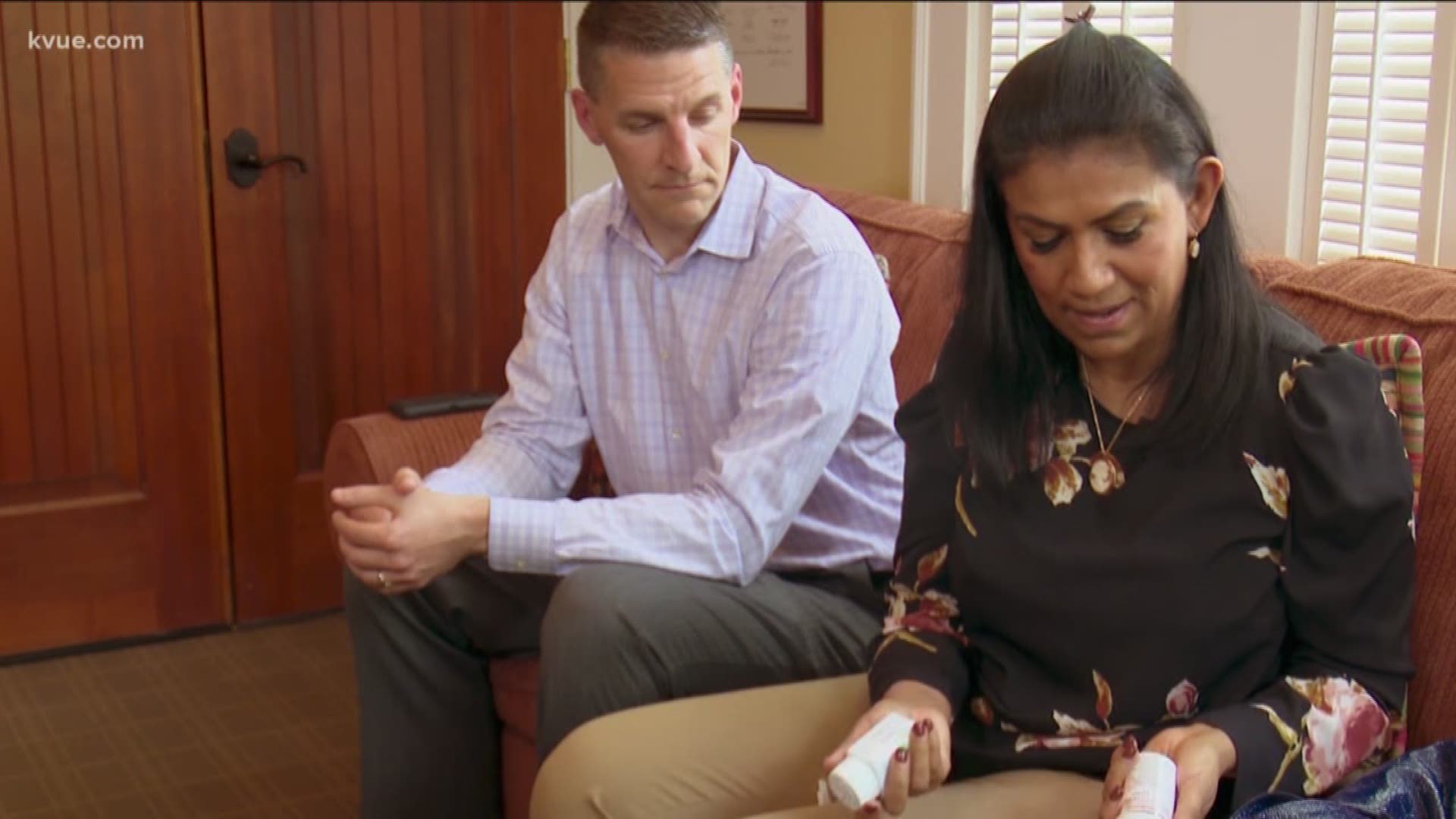 AUSTIN, Texas — They promised each other for better or for worse.

“We are high-school sweethearts,” said Lorena Lopez-Gonzalez as she sat beside her husband, Bryan Havell.

When they made their vows 18 years ago, the couple didn’t know how scary life would turn out to be.

“[This is] my medical bracelet. It says adrenal insufficient. Give emergency steroids,” said Lopez-Gonzalez.

She has Hashimoto’s disease, a condition in which the immune system attacks the thyroid. Her thyroid doesn’t make enough hormones for a normal life

“It’s like operating with a half a tank of gas,” said Lopez-Gonzalez.

To make it even more complicated, she is sensitive to certain fillers contained in typical prescription medications. So, two years ago, her doctor recommended she take her prescription for thyroid medicine to Stonegate Pharmacy in South Austin, a compounding pharmacy.

Compounding pharmacies legally tailor and mix their own prescription medications but without FDA testing or approval, like standard prescription drugs. They’re regulated by the Texas State Board of Pharmacy.

“I remember getting the new script,” Lopez-Gonzalez said. “I started to feel unwell. My head was really bad migraine.”

Her doctor told her to give it a few days.

“We went to the ER. I was there for a couple of hours. They discharged me,” said Lopez-Gonzalez.

This is where those vows became so important.

“I don’t remember the part, after I came home from the first ER visit,” said Lopez-Gonzalez, looking at her husband.

“She continued to get worse,” said Havell. “She really started having cognitive issues, mixing up her words.”

The woman he knew since high school started changing.

“I was really agitated too,” said Lopez-Gonzalez.

They went back to the emergency room. This time, admitted.

It took three days to find out her under-performing thyroid was now in overdrive.

She spent another five days in the ICU under a medically-induced coma while doctors worked to end what they called a “thyroid storm.”

“It’s one of the most frightening things I’ve gone through,” said Havell.

“Plus, they told him that the probability of surviving that was ... I don’t know what statistic they gave you,” said Lopez-Gonzalez.

“Nobody knew because the thyroid levels were so high,” said Havell.

1 / 10
Erica Proffer, KVUE
Lorena Lopez-Gonzalez says she almost died due to a dosage error made by her compounding pharmacy in Austin.

Lopez-Gonzalez and Havell left the hospital with more questions than answers. The doctors recommended seeing an endocrinologist.

“[The endocrinologist ran] more labs. She said to me, ‘Are you trying to kill yourself,’” said Lopez-Gonzalez. “The endocrinologist thought the only way someone could get so much thyroid in their body is if they took bottles and bottles of the medication. I went into defense mode.”

Questioning the thyroid pills, she asked the Stonegate Pharmacy manager to check her medication. A week passed.

“He said, ‘Yes, we made a mistake,’ but didn’t say how big,” said Lopez-Gonzalez.

The Texas State Board of Pharmacy’s records show how big. She was taking 54,000% higher than the prescribed dosage.

“I’m glad it wasn’t my fault, because I thought it was my fault,” said Lopez-Gonzalez, as she started to cry.

Sometimes, when we look for answers, we start by searching within. We blame ourselves.

She said doctors called her irrational and thought she was suicidal, that they never questioned if the drug meant to help her live almost led to her death.

“I think it took me maybe six months later for me to process what happened to me,” said Lopez-Gonzalez.

Pharmacy board records show that, in 2016, Stonegate gave other patients excessive doses of thyroid medicine. In one case, 98,000% higher than the prescribed dosage.

Since 2014, there have been seven different violations.

In December 2014, Stonegate “failed to keep and maintain complete and accurate records” for its hydrocodone supply.

In May 2014, Stonegate “inaccurately communicated” a testosterone prescription to another pharmacy … which the patient was “fatigued” among other effects.

For four months that same year, Stonegate “did not possess a [proper] license” but still compounded and dispensed medications.

If these violations sound far in the past, it’s because some of them took two years for the state to investigate and enforce.

“I think most pharmacies are doing the right thing. They want to put out a good product,” said Allison Benz, R. Ph., Director of the Texas State Board of Pharmacy.

No compounding pharmacies in Texas have lost their licenses since new FDA rules in 2013.

“It’s pretty severe that someone loses their licenses,” said Lopez-Gonzalez.

Most pharmacies get reprimanded, fined and/or put on probation when problems are found.

Like Stonegate, which got a $16,200 total fine with fees and penalties, a five-year probation and an order to develop an internal “continuous quality improvement program.”

“I felt really insulted. I think it totally minimizes the impact it made on my life,” said Lopez-Gonzalez.

“There really needs to be a change,” said attorney Sean Breen of Howry, Breen & Herman LLP in Austin.

Breen represents Lopez-Gonzalez in a lawsuit against Stonegate, claiming the pharmacy was negligent. Stonegate denies all allegations.

The 839 compounding pharmacies in Texas get inspected every two years, unless a problem is reported.

“We really should look at where our priorities are as a society when we really don’t have enough resources for the pharmacy board,” said Breen.

The state pharmacy board has 12 inspectors and seven field investigators for the entire state.

“It would be nice to have some additional inspectors,” said Benz.

Records show 12 compounding pharmacies have been reprimanded and/or fined during the last year.

“It’s possible … if we had a bigger staff,” said Benz.

The board has asked the legislature for funding for two more inspectors this year. Meanwhile, Lopez-Gonzalez’s daily life is a reminder of trust broken by a system she believed would help her live.

“These are the ones I need for emergency purposes,” said Lopez-Gonzalez, holding three pill bottles.

“This has my emergency steroid that I have to carry and give to myself,” she said, pulling out another container. “I could pass out at any minute. I’ve used it twice.”

KVUE Defenders reached out to Stonegate Pharmacy for an interview. Stonegate’s attorney responded saying they don’t comment on pending litigation.

Advocates for compounding pharmacies point out the good they do. They can specialize medication for patients who can’t take the standard manufactured drug.

Click here to check your pharmacy and/or pharmacist history, license and registration information.

Although the FDA does not regulate or verify the safety of a compounded drug, the FDA can inspect a facility.

The FDA records show two inspection reports, including violations, for Stonegate Pharmacy – one in 2016 and one in 2018.

Click here to see the FDA warning letter from 2016.

If you have a story for the Defenders, email us defenders@kvue.com.