The school's song is said to have racist origins. 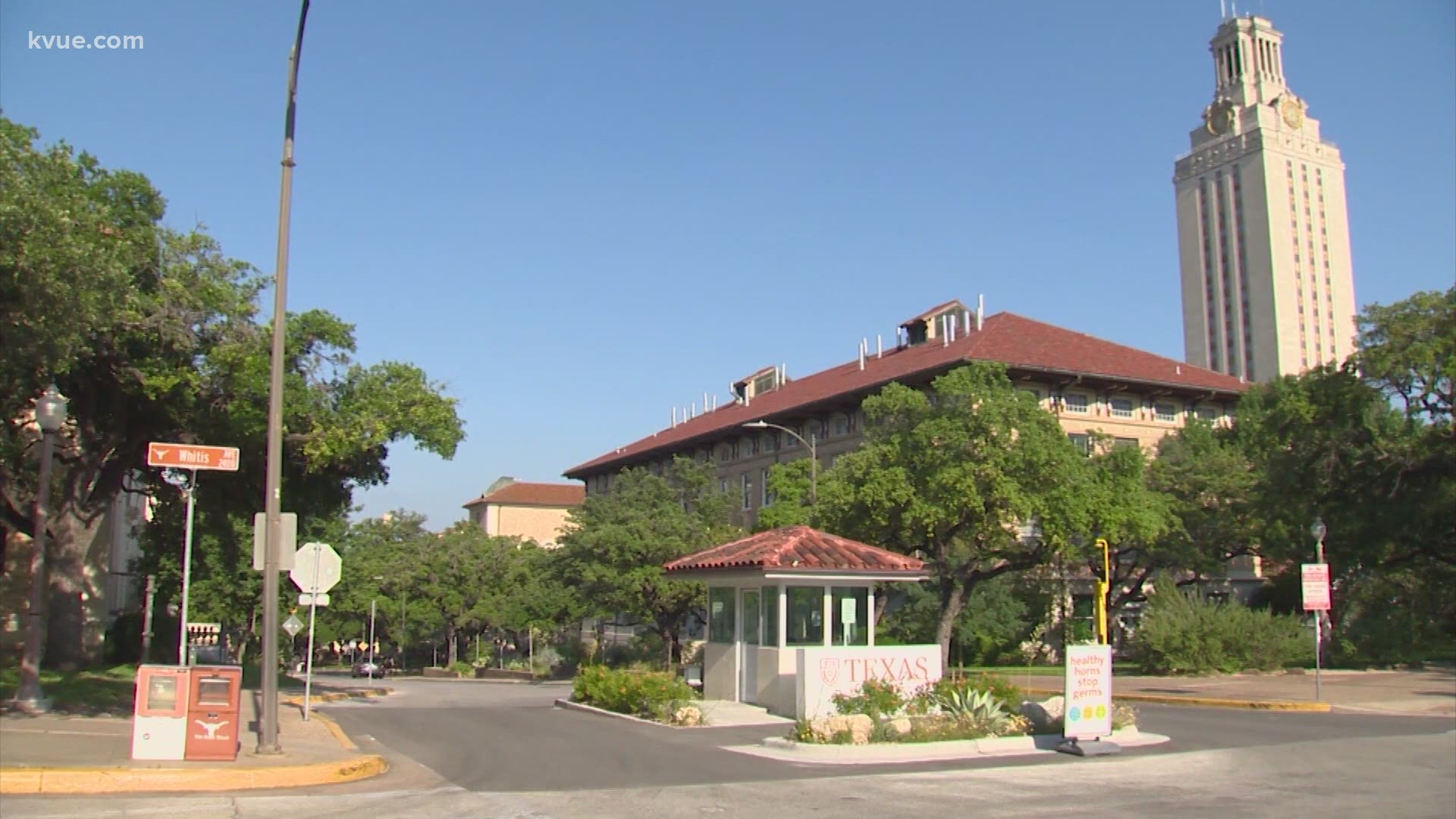 AUSTIN, Texas — "The Eyes of Texas" and its controversy are upon the 40 acres once again.

On Monday, a group of Black lawmakers, civil rights leaders, students, and alumni held a news conference at the Texas Capitol denouncing the University of Texas' decision to keep "The Eyes of Texas" as its official song.

A song meant to unite in school spirit is now dividing a campus, instead.

Anthony Collier is a second-year law student and president of the Student Bar Association.

"We can't afford to place profit over people and bow to pressure from bigoted donors," Collier said.

UT sophomore sociology/Black studies double major Zion James laid out a list of demands from the group of Black leaders.

"It was just very disheartening, disappointing to see," James said.

James said the groups demand UT stop using "The Eyes of Texas" as the school's alma mater, insisted on efforts in Black retention by allocating more scholarships and financial aid to Black students, demanded the creation of more affordable housing, demanded the appointment of more Black professors and teachers assistants and demanded more training on race, anti-racism and UT's history with race. Finally, James concluded the list by demanding UT rename all buildings named after people contributing to the racist history.

Judson Hayden, UT junior communications major and Longhorn band member, said he had met with university administration – including the Eyes of Texas Committee – over the past few months. He described UT's "handling of the situation horrendous at best."

Hayden also said he'd been the subject of personal attacks due to his open resistance to the song and claimed UT has not offered protection to students calling out social injustices.

"It felt very much so like the university was gaslighting us into believing that this song was somehow acceptable at the university," Hayden said.

Both James and Hayden said the student body was "shocked, but not surprised" at the decision to keep the school song because President Jay Hartzell had already announced the song would stay the school's alma mater. James said he did not see an adequate representation of Black students on campus.

Dr. Alberto Martinez is a history professor who did his own research about the song's origin.

"At some point during the 20th century, (a) story started to circulate that President Prather of UT Austin was inspired by a statement of General Lee when he was president of Washington and Lee University back then, known only as Washington University in Virginia from 1865 until 1870 when he passed away. The statement was, the eyes of the South are upon you,"  Dr. Martinez said. "That story was investigated by The Eyes of Texas Committee, and they didn't find any evidence that General Lee did say that statement at the end of the speeches. But that story is not what I researched."

Martinez said he researched the history of the song and its ties to then-UT President, William Prather, and Confederate general, Robert E. Lee.

"I wanted to know the history of the song. Everybody acknowledges, including the composers of the song, that the song comes from a phrase spoken by President Prather in 1900 and subsequently until he died in 1945, everybody acknowledges it in the speech in which President Prather stated that phrase," Martinez said. "[Prather] said that this incident connecting and pertaining to General Lee happened in the Battle of the Wilderness. So what I did was look at the history of the Civil War to find out. The question I would ask you to ask [UT] is, why didn't they do that? Because to me, it's intriguing. In other words, the story about General Lee at the University of Washington ... President Prather ... we have no document that he actually claimed false stories or plausible stories arise many times decades after somebody does something. What he himself explained and what his daughter explained is that this came from Civil War, Battle of the Wilderness, General Lee, and General Greg. So that's what I investigated."

The 24-member Eyes of Texas committee also researched the song.

Its conclusion came out at the beginning of March. The report states while the school song has ties to minstrel shows, it was not overtly racist.

The Texas Legislative Black Caucus is working with the university in hopes to change this decision.

State Rep. Ron Reynolds is the vice-chair of the Texas Legislative Black Caucus.

"I am disappointed in the university's decision but heartened by the commitment that the young students have shown," Reynolds said. "They are simply asking for a racism-free environment so that they can be fully integrated as students. Removing the song is not too much to ask. If the song is changed, no one is harmed...We, as the Texas Legislative Black Caucus, are against the continuation of the Eyes of Texas song. We're unequivocal about that," said State Representative, Ron Reynolds, who represents Missouri City near Houston.

"UT seems to think that because the song's lyrics are not 'overtly' racist, that there's no harm, no foul," said Gary Bledsoe, Texas NAACP president and alumnus of UT and the UT Law School. "It's unconscionable that UT officials have not thought about the matter from the impact on Black people – that the song is mired in the racist tradition of minstrel shows and blackface-wearing White students. We will continue talks, so they understand the impact and facts – that minstrels were performed to degrade and mock African Americans as a form of entertainment for White people. That is as racist as it gets."

James also plays the saxophone in the Longhorn Band. He said he doesn't know if the band will be playing the Eyes of Texas in the fall because of what happened in 2020.

"It was a whole dumpster fire," James said.

But James does know a lot of his band members support him.

Bledsoe said it is humiliating to merely be required to sit in the presence of the song, let alone being forced to sing the song or not.

A spokesperson for the University of Texas sent KVUE the following statement:

"We look forward to working with members of the Legislature, our students, and other stakeholders to continue to improve our campus, building on our recent all-time highs in minority enrollment and financial aid availability. The university is committed to seeing through the initiatives started last summer and to looking for more ways to support our students."