With TCU next on the Longhorns' schedule, Tom Herman addressed the "Texas standard" and what he's seen from the Horned Frogs this season. 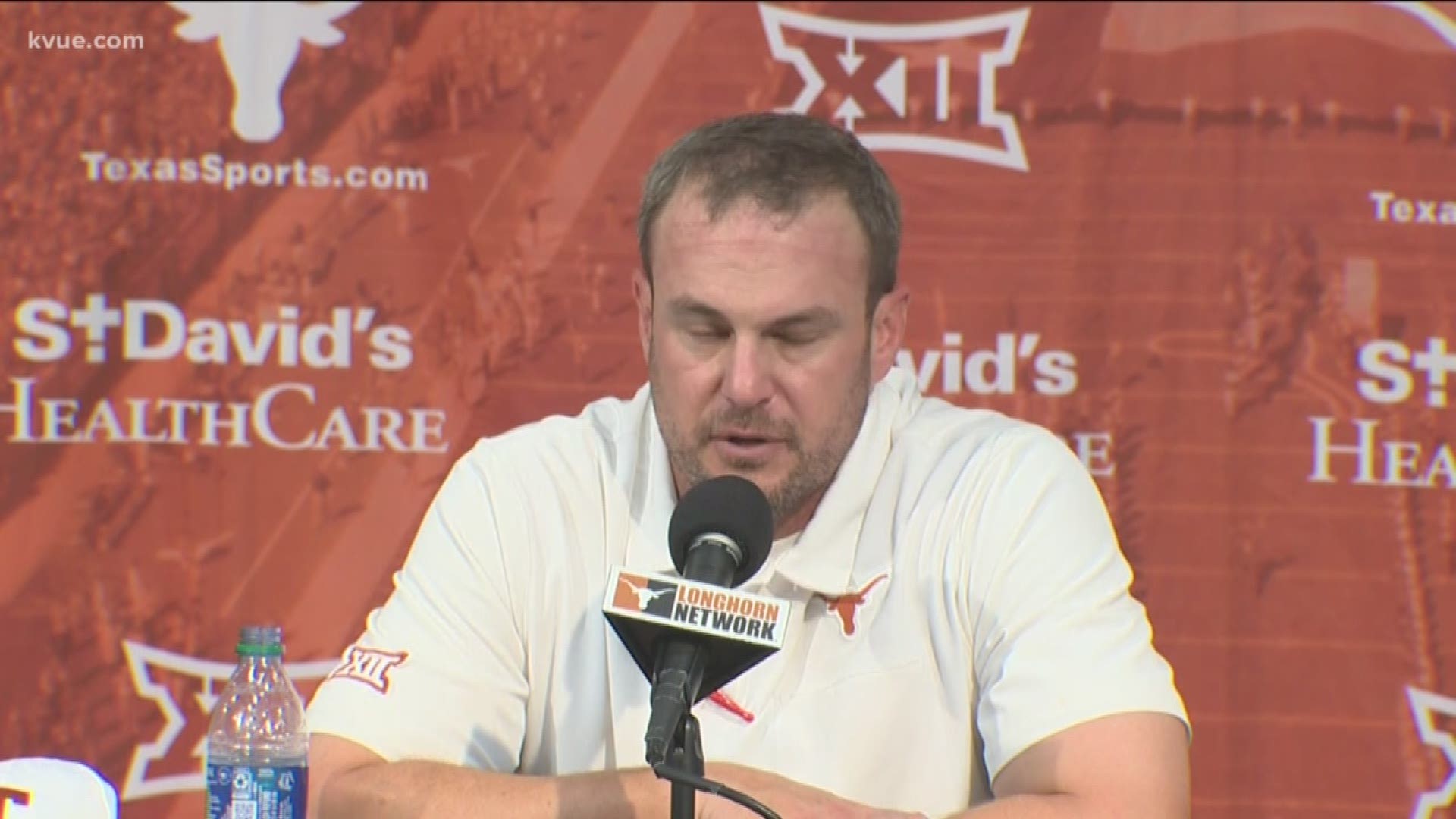 A lot of questions were raised about the defensive performance after Saturday's win, and Tom Herman was fairly frank with the media about those questions.

Looking forward, Texas will go on the road to face TCU, who are coming off of a 24-17 loss to Kansas State. Texas has lost four of the last five matchups against the Horned Frogs, with the sole win coming in last season's game at DKR.

Tom Herman opening statement: "Excited to be back at work. Had a really good practice yesterday. We know we have to play better defensively. Everyone associated with that side of the ball, we all get it. I think we can and will figure it out. Injury update: DeMarvion Overshown practiced yesterday. Complained a little bit from some shoulder pain. Felt okay yesterday, this morning (he) came in a little bit worse so we're sending him in for all the normal tests. Jalen Green did practice yesterday. We will see how he handles some contact tomorrow. B.J. Foster ... we're working him up."

Brandon Jones – Limited in practice, but expected to play.

Herman on if it's wrong for fans to be concerned by Kansas result: "No. They should be. We have standards at the University of Texas that we need to play up to, and we didn't on that (defensive) side of the ball. Again, when you're starting nine freshman or sophomores on the defensive side of the football and you turn over the ball twice in the fourth quarter where we turned it over, that's not good complementary football. So although the numbers say we played well offensively, I would say situationally we didn't help our defense. None of us are OK or satisfied with the defensive performance just because we won the game. We do expect to play much, much better."

Herman on if there was an emotional let down after Red River Showdown: "No. We jumped up 14-0. We got some stops and played well offensively. No. They did their best, emotionally. When you watch, we were flying around and running to the ball. We were just doing it with poor angles and the wrong spot. Had some poor fundamentals. The effort level was not a question for either side."

Herman on what the issue is defensively between schematics or personnel: "It's everything. If it were that easy, it would be fixed tomorrow, but it's not. To say it's one thing ... or if we do this then we'll be a really good defense. I think guys that have been here for two and three years should be able to play man-on-man coverage and quarters coverage. Us coaches need to uphold our end of the bargain in terms of techniques and the players need to uphold their end of the bargain by applying those techniques on game day. I'm never going to say it's personnel. We going to have really good players at the University of Texas. Now, how experienced are they? How developed physically and mentally? Only time can handle experience and the coaches can handle the development part."

Herman on measuring week-to-week success: "It's not 48 points and 500 something yards. I can tell you that. That's not success. But the one thing we can't coach is effort. We are playing with a tremendous amount of effort. Now it's on us to figure out with the personnel that we do have. What do they do well? Enhance that. Where are they deficient? Either improve it or eliminate that from the game plan. It's on the players then to do what they're coached to do. It all circles back to coaching."

Herman on defensive leadership: "There's three leaders: the two captains and Joseph Ossai. (Ossai) has definitely emerged as a leader of that group. When families are hit with adversity, one of two things happen: you come together more or you splinter. I think they're doing a really good job of as leaders on that side of the ball of making sure everyone is coming together."

Herman on importance of depth to long-term success: "Critical. You're seeing it. I had our training staff do a study through seven games. We actually have eight less documented injuries this year, 107 less missed practices, (the injuries) just all happen to be at one position this year. It gets a bit frustrating when it snowballs at one position. That's why you recruit the way you do. You're going to have to be forced to play young guys."

Herman on Collin Johnson and Devin Duvernay impact: "I think maybe the missing/overlooked part of the offense is that we're running the ball better than we have the past two years. And we're incorporating the field receiver more in the throw game. Brennan Eagles is a legitimate threat that you have to be concerned with. But those two seniors ... their talent coupled with our ability to run the ball and Brennan's ability to beat man-to-man coverage ... makes defensive coordinators ponder long and hard on how to defend us."

Herman on what the team has gotten better at: "I was proud of our tight red zone execution. If you want to look at plays of the game defensively, the blocked kicks provided huge swings in point differential."

Herman on thoughts regarding TCU and what he's seen: "I don't know that their defense has given up big points. I know that the SMU game sticks out to everybody, but SMU had a lot of short fields. I felt good this morning knowing last year's team beat them 31-16. No. 90 is a load. He's as good a defensive tackle as we'll play this year. No. 6, their nickel, is a really active player. They're going to be really well coached, defensively."

Herman on reminding players about the Texas standard: “Our job is to defeat human nature everyday as coaches. Human nature, if you’re a young player on defense is to say…well, I’m young. That’s human nature is to blame, complain and defend yourself and we have to constantly educate them that there isn't. Talking about the price of a championship … it is really expensive in terms of time and energy. That price will never come down. Regardless of who we jog out on the field that standard is expected to be met.”

Herman on special teams and return game : “Still a work in progress. The return game has not been good. We’ve got to play more starters on special teams and you’ll see more of the combos … should see a lot more starters on that. If we’ve got a talent advantage, we should be using it in special teams, as well. I think in the day and age, all the statistics with touchbacks being at 25-yard line, returning a kickoff from the one or two yard line – even if you're Devin Duvernay –  is statistically probably not the right move.”

Herman on Cade Brewer: “We know what Cade can do. We’re throwing the ball pretty good through seven games. To say we’ve got to change or add to our repertoire would be a bit silly. We knew what Cade could do … it just so happened we had really advantageous looks to run them and he executed.”

Herman on defensive strategy: “I think we’re confident. I think you always worry that if you don’t evolve … teams are going to catch up. Look no further than the defense that we’ll play this week. I don’t think pressing the reset button is necessarily always the answer.”

Herman on offensive line evaluation: “Good enough in that game. I think overall, we’re playing better than we have in our last three years here. Anytime you can rush for 200 yards and I think we’ve done it now three times … three or four. You can say, hey we’re playing pretty well.”

Herman on decision to go for it on fourth down: “All of those analytics … it is a very complex formula and I don’t always listen to it. More so, believe it or not, on the conservative side of things. We’ve got to do a better job of coaching our guys to execute those plays. I do think…certainly with any of those decisions how the other side of the ball is playing. There’s a lot of factors that go into each one.”