Why this state senator decided against fleeing to Washington, D.C.

In 2003, Senate and House Democrats left Texas to prevent further debate and voting on drawing new political district lines across the state. 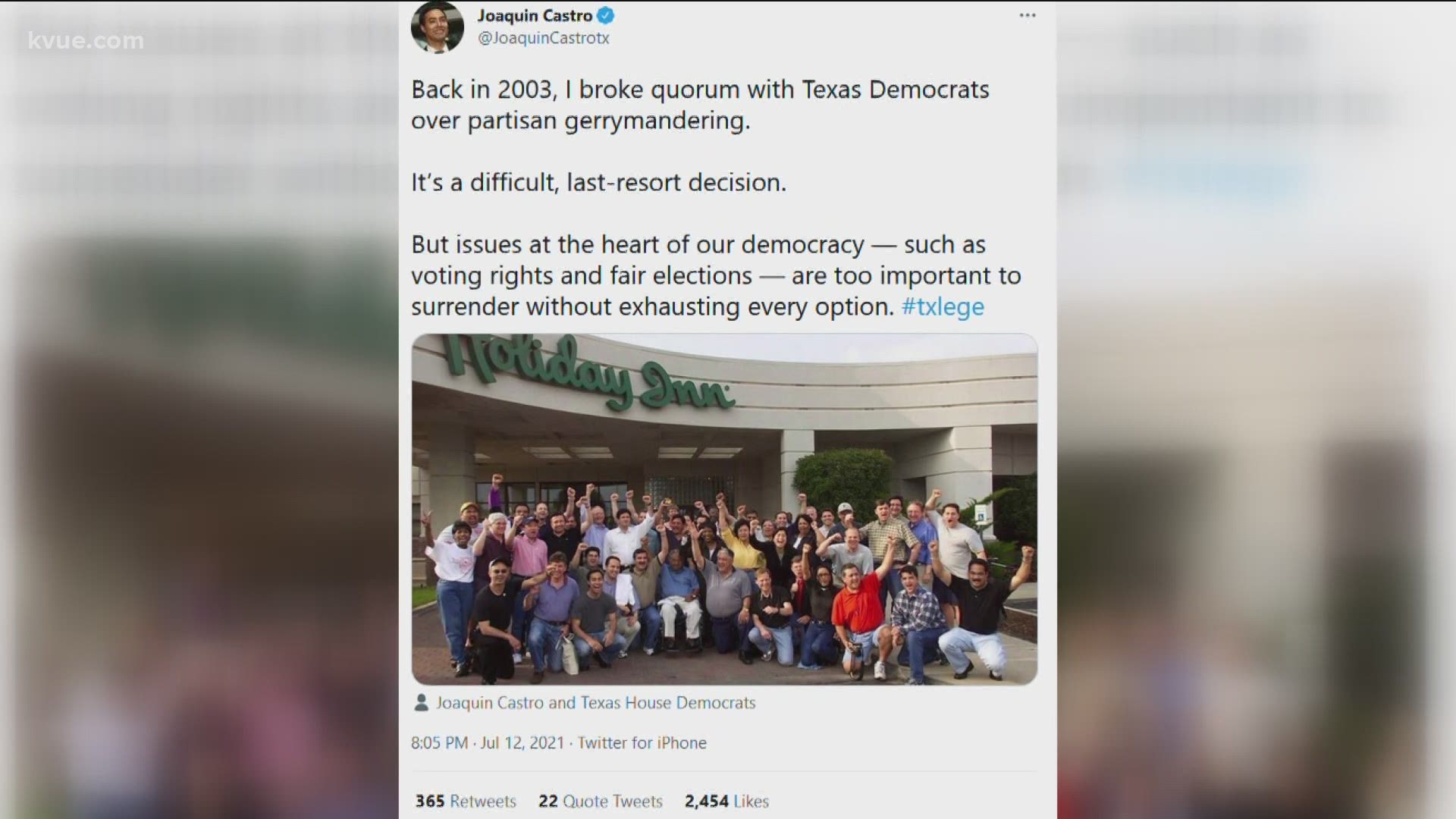 AUSTIN, Texas — While Texas lawmakers breaking quorum is rare, it's not unheard of. In 2003, state lawmakers left Texas, heading to Oklahoma and New Mexico to prevent further debate and voting on redistricting.

State representatives traveled to Ardmore, Oklahoma, while state senators went to Albuquerque, New Mexico. Current U.S. Congressmember Joaquin Castro (D-San Antonio) shared some of his memories on Twitter this week. At the time of the 2003 walkout, it was his first legislative session as a state lawmaker.

Back in 2003, I broke quorum with Texas Democrats over partisan gerrymandering.

But issues at the heart of our democracy — such as voting rights and fair elections — are too important to surrender without exhausting every option. #txlege pic.twitter.com/n7yvmtNvPc

According to current legislators, talking with those who took part in the 2003 walkout has shed light and the mental and emotional fortitude it takes to leave the state indefinitely.

"We talk to them about the challenges and why it doesn't always last because of the pull from home and other aspects in our lives that can call on you," Rep. John Bucy III (D-Cedar Park) said.

State Sen. John Whitmire (D-Houston) was one of four Democratic senators who did not leave the Texas State Capitol this week. In 2003, Whitmire said he, along with most of the Democrats in the Senate, went to Albuquerque with "just the clothes on our backs."

"We had left with the belief that we'll be gone four days," Whitmire said. "We got to Albuquerque and no one ever tried to get us back in four days. So, 35 days later, we were all going somewhere for Labor Day, and report back Tuesday after Labor Day. I went to Houston, to an East Texas lake house and gathered my thoughts and went back and told everybody most of the members needed to get back."

When was the last time Texas lawmakers fled Texas to halt legislation?

Whitmire was the first senator to return to the state capitol in 2003, bringing quorum back with him. This time around, he said it would not have made a difference if he left. State senators from the Rio Grande Valley had already committed to staying in Austin.

"It's a very personal decision, you have to decide whether you can be the most effective," Whitmire said. "[Wedneday], I spent a lot of time trying to speak for the transgender families in Texas. So I just felt like based on experience, being on the Senate floor would be more effective."

Texas Democrats in Washington, D.C., say they plan on staying there indefinitely. While Whitmire admires the resolve, he's interested to see how that plays out in a week or two once the "energy level is lowered."

"A lot of time you have to worry about the lasting effect of some of these altercations," Whitmire said. "Most members felt like we've done our part, but how do you get back? And that's the challenge that probably the current group has. 'What's your endgame?' So I just said, 'The endgame is I'm going back and fighting on the Senate floor.'"