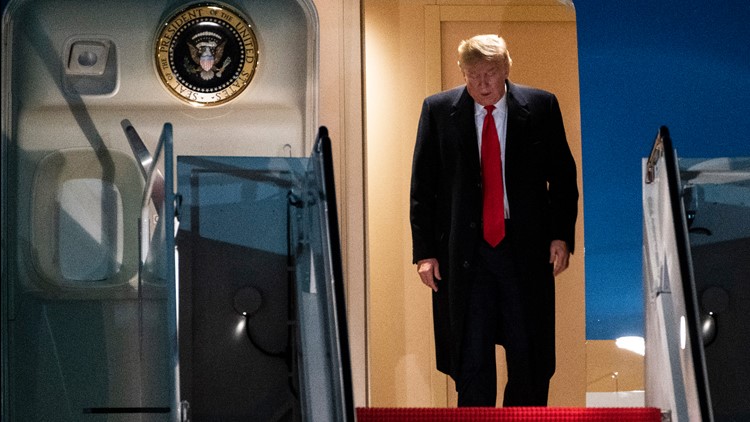 Donald Trump's guiding principle is the idea that he's the president, and that means he can do what he wants. It has governed how he operates with his staff, world leaders and lawmakers.

Trump's legal team in the impeachment trial against him is also signaling that it will be a strategy. House Democrats are telling the Senate that the Constitution was designed to ensure that no president could claim the absolute rights of kings.

Trump's lawyers have argued his position as president gives him the right to disengage from the inquiry, and is behind the acts he's accused of committing. In legal briefs by Donald J. Trump's defense team, as the Associated Press points out, the president's defense team very well might make the idea of Trump's "absolutism" a central part of their defense Monday. The idea that Trump is, as the Associated Press writes, "cloaked with unrestrained authority" will be looked at during arguments.

Trump said last year, when citing Article II of the Constitution, “I have the right to do whatever I want as president.”

House Democrats say Trump abused his office when he asked Ukraine to investigate Trump's political opponent in the 2020 presidential race, Joe Biden. This as he withheld much needed military aid appropriated by Congress for the country, according to the House impeachment managers arguing the case on the Senate floor.

One of Trumps attorneys was quoted on the Senate floor stating, “President Trump has not in any way ‘abused the powers of the Presidency,'" continuing with, “At all times, the president has faithfully and effectively executed the duties of his office on behalf of the American people.”

Adam Schiff told the Senate, “Nothing could be more dangerous to a democracy than a commander in chief who believed that he could operate with impunity, free from accountability.”

Trump has been clocked as declaring he has an "absolute right" to use his executive authority around 29 times since he became president, according to the Associated Press who reviewed his comments in Factba.se, an organization which compiles data on the Trump presidency.