The City of Austin's goal is to someday have a park or trail within 10 minutes of every house or residential building. 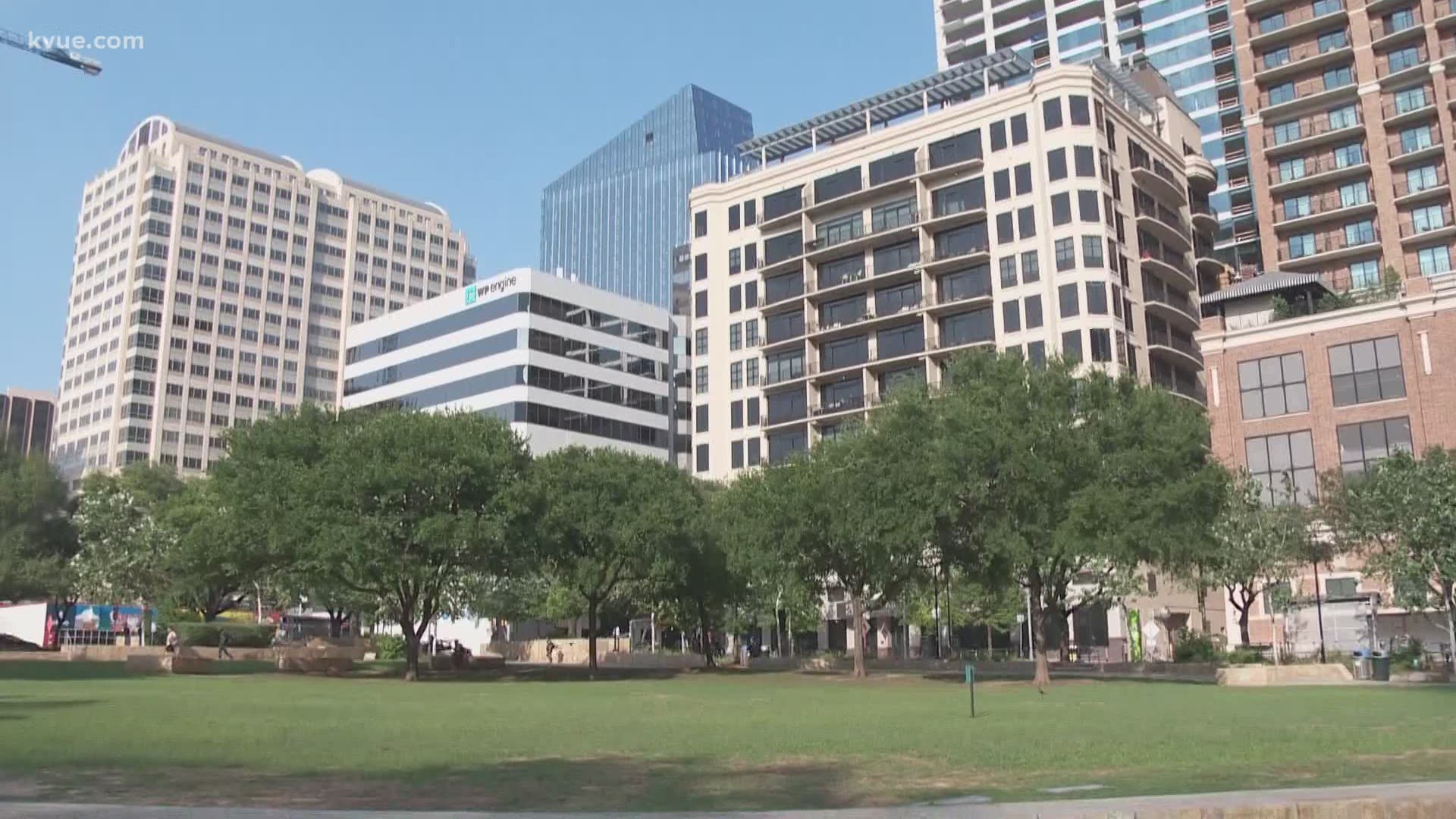 AUSTIN, Texas — When people talk about Austin and what they love about the city, there is a good chance they will mention the outdoors.

Whether it's hanging out in Zilker Park, running on a trail in the greenbelt or playing on the playground in a local neighborhood park, it is pretty easy for people to find greenspace somewhere.

However, as Austin's population rises and more developments fill the city skyline, keeping the greenspace around has become a greater challenge for city leaders – a challenge they have eagerly accepted.

Austin ranks No. 37 out of the top 100 largest cities in the country for having the best parks, according to the Trust for Public Land's Parkscore report. This score is based on a City's access to parks, acres of parkland, investment in the parks and amenities available.

Many Austin residents told KVUE that, overall, they enjoy spending time in Austin specifically because of these spaces.

"You have the city life, but also you've got like the nice outdoors, the hills," said Stephen Walker, who lives downtown.

"They're not just little tiny parks. They're, you know, open spaces," said Florence Wong, who lives in East Austin.

The park system continues to grow every year, and the City of Austin's goal is to have a park within a 10-minute walk from every resident.

In 2020, the City of Austin's Parks and Recreation Department (PARD) acquired more than 75 acres of parkland spread over 17 new parks and helped complete 20 other park development projects.

Many more projects are also in the works or planned for the future.

Credit: City of Austin Parks and Recreation Department
Areas on the map in yellow represent park deficient areas of the city.

While city leaders are planning ahead as best as they can, the population is growing at a rapid pace that is difficult to sustain.

Nearly 200,000 people have moved here in the last decade alone, according to the U.S. Census Bureau.

"My concern is that they [the parks] will eventually become loved to death," said Ladye Ann Wofford, chief mission officer for Austin Parks Foundation (APF).

Wofford said the coronavirus pandemic encouraged people to spend more time at parks and on trails.

While these leave her optimistic about people continuing to use the parks in the future, Wofford said it has also posed problems since funding and manpower to maintain the parks dropped even though the wear on the trails did not.

"Austin Parks Foundation hopes to really engage all of our volunteers this year around advocacy around the PARD's annual operating budget," she said. "We'd really like to see that increase in a significant way so that the Parks Department can really recover from the recent winter storms that we had as well as all of the challenges that they experienced during the pandemic."

One of APF's biggest financial supporters, the Austin City Limits Music Festival, has brought in more than $41 million in the last 15 years.

However, that festival was canceled in 2020 due to the pandemic, meaning APF lost that funding. To tack onto it all, the organization's yearly volunteer day, which attracts more than 1,000 volunteers to clean the trails, was canceled last year, too.

We're thrilled to bring you #ItsMyParkDay Spring 2021 presented by @wheatsville! IMPD Spring will be a hybrid event including both in-person and virtual volunteer opportunities from Saturday, June 5th to Sunday, June 13th. More information at https://t.co/FwHW8QZp7q! 🌳 pic.twitter.com/iqwBFK2Qgn

KVUE reached out to PARD, who confirmed they have had several people out due to the number of families impacted by COVID-19.

"Staff fluctuations impacted service levels at the parks, especially during the spring and summer months. However, PARD crews are dedicated and continue to do a great job taking care of our parks and facilities even with limited resources," said Charles Vaclavik, division manager of operations and maintenance for PARD.

How much funding do the parks receive and is it enough?

Compare those figures to the prior budget, which allocated $3 million less to the parks department. In addition, a bond issue approved back in 2018 also provided $45 million to purchase parkland.

While it's clear that the City's budget toward parks is growing, Wofford told KVUE it is not significant enough to make real progress and keep up with the growing community.

However, the City has one more key tool that is helping keep it green as the concrete jungle grows: parkland dedication.

Parkland dedication is a city ordinance passed by Austin City Council in 2016. It requires new residential developments and hotel/motels to either dedicate parkland or funds-in-lieu to the city that will specifically go towards improving and building parks in the area, or securing money to purchase future parkland.

"We go through a needs assessment. We created this gap analysis that tells us what areas of town don't have parks within walking distance," Scott said.

This way, as the City's residential infrastructure expands to accommodate more people, there will always be space allocated for a park or trail within walking distance.

As expansion happens, officials want to ensure parks are as equitable as possible. Their focus has shifted significantly to East Austin, an area where the parks have been neglected in the past.

The Austin Parks Foundation even made it their mission to contribute $1 million each year to improving the parks in the area.

This is Pan-American Neighborhood Park which opened in 2019. It is just one of the numerous parks underway in East Austin to improve and expand the park system there.

Expect more parks and trails across Austin in the coming years as leaders try to keep up with the growing need. pic.twitter.com/7MFmlTxk7H

While the City is in for the long haul in reaching its goal, park leaders and nonprofits say the community can help by advocating for more support, funding and volunteerism.

"I would like for Austin to be ranked number one in all good things, especially our parks," Wofford said.

APF will kick off its Park Summit Series in the coming weeks. Anyone interested can view that on austinparks.org or via Spotify by searching for the Austin Parks Foundation Parkcast.