By voting in favor of Proposition B, voters have approved making it illegal to camp in certain public spaces in Austin. 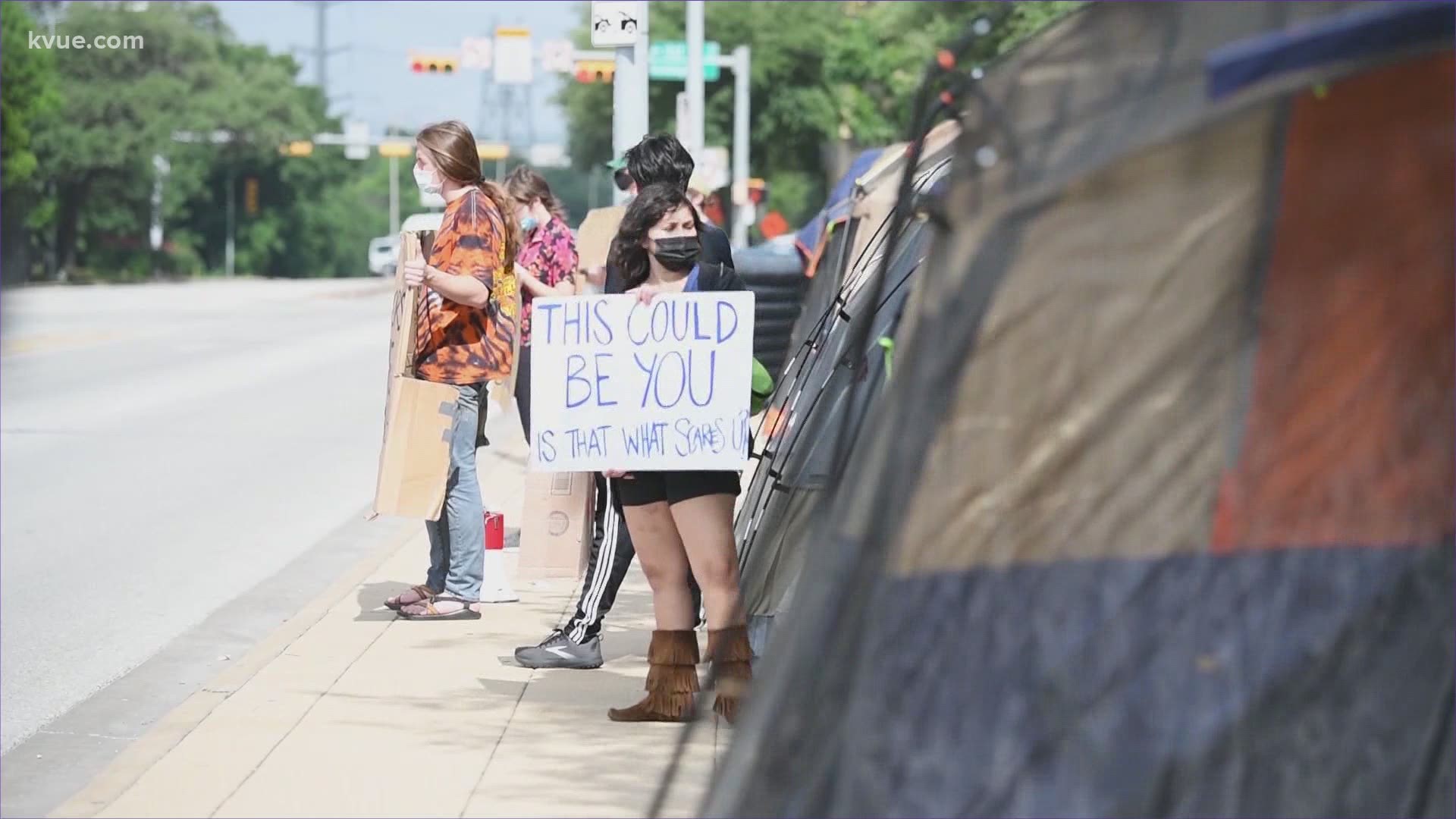 AUSTIN, Texas — Austin voters made their voices heard in the May election on the controversial Proposition B, which aims to reinstate the public camping ban that was reversed in July 2019.

Prop B garnered strong and passionate pushes of support and opposition from City leaders and local organizations. Austin City Councilmember Greg Casar said Prop B was not a solution to homelessness in Austin.

"As results roll in, I expect the results for Prop B will get closer," Casar said on Election Day. "But I do not believe Austin is as divided as this election makes it seem. The overwhelming majority of Austinites share a common goal, no matter how folks voted on Prop B. We all want to get people out of tents and into homes. Our community must come together after this election and house 3,000 more people because we can only solve homelessness with homes, not handcuffs."

Austin Mayor Steve Adler was also notably against passing Prop B. Adler said in a statement that he believes the next step of ending homelessness is to put resources into housing options for "unhoused residents."

"My big takeaway from the election ... I think you're looking at the election and the results and people on both sides is that everybody in this city wants tents gone and the people in better, safer places," Adler told KVUE in an interview the Monday after the election. "I think that no one can countenance the tents and we shouldn't ever do that. It was never something that was acceptable – still is not. But it's clear that we have to accelerate and scale our efforts to close down the tenting and to get those folks in better, safer places."

In February 2020, the PAC Save Austin Now started a petition to put an item on the November 2020 ballot to reinstate the City's camping ban. In August, the City clerk ruled that the group's petition did not succeed due to an insufficient number of signatures.

Save Austin Now continued its efforts to get the item on a ballot, starting a second petition. A day after the group reportedly secured enough signatures to potentially put the item on the May ballot, Gov. Greg Abbott announced that if Austin didn’t elect to reinstate its camping ban, the State would step in.

That month, the city council also voted to pass its amended HEAL initiative, which would partially reinstate the camping ban going forward. The initiative's aim is to remove those experiencing homelessness from four high-traffic areas in Austin and connect them with housing and shelters. The first phase of the initiative is expected to be completed by late this summer. It is unclear at this time if or how the reinstatement of the ban will affect that initiative.

What's next after passing Prop B? How will it be enforced?

The camping ban will go into effect on May 11.

From that day onward, it will be illegal for people experiencing homelessness to camp in any public area not designated by the Parks and Recreation Department; to sit or lie on a public sidewalk or sleep outdoors in and near the downtown area and the area around the University of Texas campus; and to panhandle at specific hours and locations.

Adler expressed concern for where people experiencing homelessness should go with the passage of Prop B.

"There is a question as to where people should go because we don't have enough places for people to be able to go. And right now, we could get people to move from one place, but they're going to go somewhere else. We have to provide better places, more so a greater number of places for people to to be," Adler said.

Adler told KVUE the implementation of the new ordinance will fall into the hands of City Manager Spencer Cronk.

When asked if the implementation of this ordinance would be similar to the ban issued for the ARCH in 2019, Adler told KVUE the previous sweep at the ARCH was a "much smaller scale" operation than the one the City will put into place on May 11. So, he says it will take time.

"[It was] about 100 people there. And we had a plan to be able to take people from that place and into better housing. But a lot of those people didn't end up in better housing. And part of that is we never had the resources to actually ensure that we could create the housing for them. So, we were trying to plug them into existing spots in our system where we don't have enough spots in our system to plug people into ... a few," Adler said. "And certainly we're housing those people over time. But it takes both the decision, the will and the resources to be able to do something like this. And I think that they're all coming together right now."

The City sent the following statement regarding the enforcement of Prop B moving forward:

"Following voter approval of Proposition B, the new ordinance will take effect on May 11, 2021. In the meantime, staff will be evaluating options for how to best implement the new ordinance. We will start with education and outreach, and will focus first on individuals living in situations that present higher health and safety risks. Outreach will be ongoing as we continue to assess encampment sites and coordinate with our service providers. The City remains committed to advancing solutions to address the complex challenge of homelessness in our community. Almost 1,900 people experiencing homelessness in Austin were moved into housing last year – an 8% increase over 2019 – and the City of Austin continues to make strategic investments to expand the housing resources available to Austinites experiencing homelessness.”

On Monday, the Austin Housing and Planning Committee recommended an increase to the city's goals for housing for those experiencing homelessness. The item will now go before the full city council on May 20.

"We must pull more of our unhoused neighbors out of tents and into homes with health services and job opportunities," said Casar, chair of the Housing and Planning Committee. “"Austin’s goals for housing those who are homeless have been far too low for far too long. By housing 3,000 more people in the coming months and years, we can drastically reduce homelessness in our community. This goal was developed at Austin’s homelessness summit, and it should go directly into our city’s housing plan."

RELATED: How to help Austin's homeless in wake of the passage of Prop B

In an email sent from APD Interim Police Chief Joseph Chacon to the department, he said they're working closely with city management, the Law Department and several City departments to identify options to best implement the ordinances that go into effect on May 11. Chacon said in the email that he'd provide more guidance and training bulletins in the coming days.

"This change will require a city-wide effort and APD is part of a cross-departmental team of City staff who are working together to look for ways to implement the changes in order to address the concerns of all residents in the least disruptive way possible and in line with our City’s mission," Chacon said in the email. "We will start with education and outreach, focusing first on those persons in situations that present higher health and safety risks. Collectively, our outreach efforts will be ongoing as we continue to assess encampment sites and coordinate with our service providers."

KVUE has reached out to ECHO and other outreach providers for guidance on their next steps in response to the passage of Prop B. TxDOT, who has been responsible for doing cleanups at underpasses in the past, told KVUE Monday it was not resuming cleanups at this time. TxDOT had paused doing cleanups during the COVID-19 pandemic.

"Thousands of Austinites are now at risk of fines and jail time for no other reason than not having a safe, stable place to go. But election results do not change evidence: A home was the first step toward ending homelessness before this vote, and it remains so now. From the outset, ECHO has followed the lead of our neighbors experiencing homelessness to amplify voices of community members who are too often ignored. Our unhoused neighbors are unequivocally demanding basic human rights like housing and healthcare, and we will continue to support efforts to achieve those rights in Austin. Our unsheltered neighbors need every one of us to come together to pursue real solutions, to scale up equitable permanent housing opportunities and supportive services that provide a stable foundation on which we all build wellbeing. Our community is stronger and healthier when everyone has the resources to meet their basic needs. A diverse coalition of partners across Austin committed in recent weeks to scaling up resources to rehouse an additional 3,000 people over the next three years, a result of a first-of-its-kind Summit to Address Unsheltered Homelessness that brought together service providers, people with lived expertise of homelessness, community advocates, the business community, and government agencies. It will take all of us, no matter how you voted, to support and expand on this work. We’ve been encouraged over the last several weeks to see so many of our fellow Austinites listening to their unhoused neighbors and supporting them in their fight to meet their basic needs. We must keep up this commitment to housing justice. We must continue to do the work."

"When homeless service providers can find people experiencing homelessness, they can more quickly connect them to lifesaving resources like primary healthcare services, mental healthcare services, social services, substance use services, and housing. It’s more difficult when people are hard to locate. For example, if housing becomes available for someone experiencing homelessness, it is essential to locate them right away, so they do not miss their housing opportunity.Integral Care teams, including PATH and HOST, will continue their work in the community with people experiencing homelessness – both in camps and wherever someone is living unsheltered. We will redirect or repurpose other staff as needed to help with this outreach effort. Our teams will support people, connect them to services, and provide information and resources when available. Integral Care is also working with the City of Austin on the HEAL Initiative, and will continue to collaborate with the City, County, and other housing and homelessness service providers across the community to help our neighbors experiencing homelessness rebuild their health and well-being."