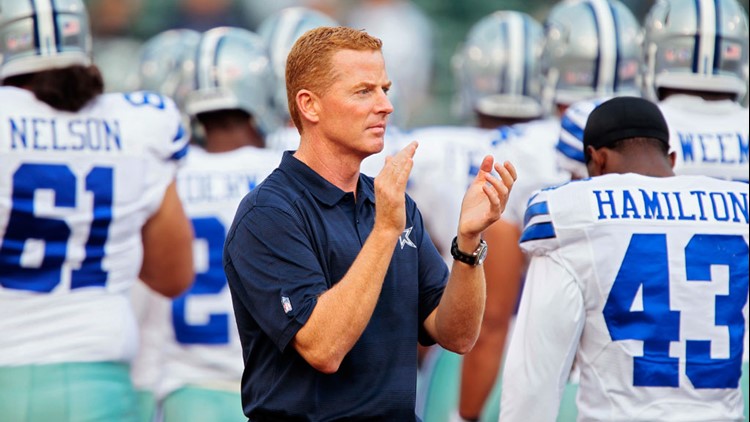 Photo by: WFAA
OAKLAND, CA - AUGUST 9: Head coach Jason Garrett of the Dallas Cowboys encourages his team before a preseason game against the Oakland Raiders on August 9, 2013 at O.co Coliseum in Oakland, California. (Photo by Brian Bahr/Getty Images)

Frisco -- This Cowboys mini-camp practice was about much more than prepration. Nothing that happened on the fields at The Star on this day, as significant as this: Luke Laufenberg was summoned to the field by head coach Jason Garrett to help out with a drill.
Author: Joe Trahan
Published: 10:31 PM CDT June 14, 2018
Updated: 10:33 PM CDT June 14, 2018

Frisco -- This Cowboys mini-camp practice was about much more than prepration.
Nothing that happened on the fields at The Star on this day, as significant as this:
Luke Laufenberg was summoned to the field by head coach Jason Garrett to help out with a drill.

"I thought I heard Luke, then I heard it again," he said. "And then someone said, 'Luke, hey, he's calling your name.' So I ran out there and he told me to hop in at defense."

Luke is the son of Cowboys broadcaster and former quarterback Bafe Laufenberg.

"I'm talking to someone and I see him jogging on the field," said the elder Laufenberg. "I'm like, 'what the heck?' And somebody said Coach Garrett just called him out there. He's out there playing {defensive back} and I'm just thinking, oh my God, do not get run over."

The over-protective response makes total sense when you know the back story.

Luke, who played tight end in high school and college, was stepping foot back on a football field for the first time since he lived through a nightmare.

Luke got sick in mid-December last year and the day after Christmas was diagnosed with an aggressive form of cancer called Burkitt's Leukemia.

"I told a very small circle of people," said Luke's Dad. "I just didn't want to be answering questions and every time I would be talking about it I would literally just cry. I cried for two weeks straight."

Team Laufenberg had help in the brutal battle that included six rounds of chemotherapy. Visits from Cowboys icons Troy Aikman, as well as Roger Staubach, Garrett and others helped raise Luke's spirits.

"It was pretty surreal," said the cancer survivor. "Coach Garrett was great throughout the process, just always sending me texts keeping me motivated. When it comes from someone like that it's a little more special just because I've been following the Cowboys my whole life so when the head coach of the team is behind you some days it can make your day."

Then the day the Laufenberg family had been waiting for. About a month ago, Babe tweeted out that Luke was cancer free. He's not done fighting though. Luke says he's determined to put the pads back on and play football again.

"You don't really realize what ou have until it's gone," said Luke "Right now, I'm not a player and it makes me what to get back out there that much more."

So this day wasn't as much about Cowboys preparation as it was Luke's motivation. And he says he's got plenty.