Winter storms: How prepared were Central Texas roads for the weather blast?

The February winter storm left most Central Texas roads covered in snow and ice for several days before the weather improved and roads began to thaw. 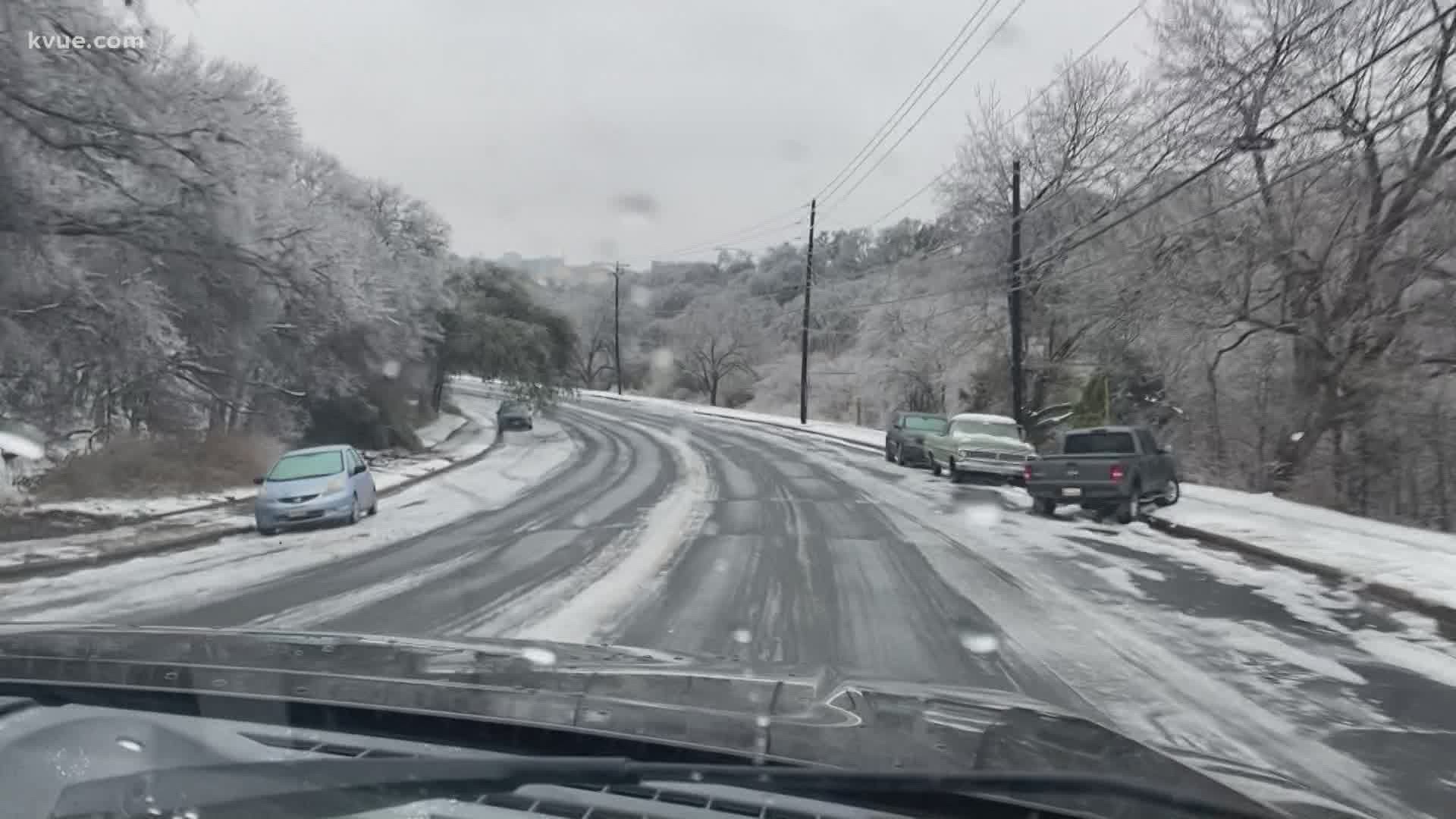 AUSTIN, Texas — As Texans struggled through the historic February winter blast that knocked out power for millions and affected the water supply for even more, the road conditions proved to be an added challenge for people trying to escape for heat or running water.

The weather conditions declined rapidly and turned out to be worse than expected, which made the road conditions even worse and put Texas Department of Transportation crews into overdrive, according to internal emails obtained by KVUE through a public records request.

“This was a very difficult storm and it was over for a much longer period of time than we're accustomed to here in Central Texas,” Tucker Ferguson, the leader of TxDOT’s Austin region, told KVUE in an interview.

Ferguson said the State agency begins preparing months in advance for winter weather then monitors the forecast throughout the season.

Internal emails indicate TxDOT crews in the Austin region were directed to “start prepping your equipment, visiting with your staff, reviewing material inventory and developing a plan in anticipation of a response” on Monday, Feb. 8, just three days before the winter blast began.

On the evening of Tuesday, Feb. 9, TxDOT crews were asked to start pre-treating bridges and overpasses.

“There is still uncertainty with the amount of precipitation and when it will come between the models. So, to combat this, the best move is to be prepared for the unexpected going into the end of this week & weekend,” TxDOT Austin director of operations Omar De Leon wrote to crews.

Crews were told to complete the task by the afternoon of Thursday, Feb. 11, in anticipation of the freezing temperatures expected Thursday night into Friday morning.

But by 8:20 a.m. on the morning of Feb. 11, it was too late. Austin-Travis County medics responded to a 26-car pileup on Texas 45 near Lakeline Mall that sent five people to the hospital, kicking off a week of treacherous conditions.

At 9:57 a.m. the same day, De Leon wrote a follow-up email to TxDOT crews: “The conditions and forecast have actually gotten worse than expected for today. I know many sections are getting hit pretty hard right now. Please let us know if you need additional assistance.”

Throughout the storm, medics responded to 115 crashes with injuries over a six-day span. Austin Fire crews responded to 739 traffic incidents in 10 days, according to data provided by the department.

“Our biggest concern was those times of freezing rain when it would freeze over so quickly and not have time to get treated. And then the bridges and overpasses, folks would start sliding around on those, so it was extremely dangerous,” said Austin Fire Division Chief Thayer Smith.

As the winter storm progressed, Ferguson said TxDOT had to adjust the response plan, at risk of running out of the material needed to continue treating the roads.

“We realized that if we didn't do something out of the ordinary, we would have run out of materials, which is why we started calling our contractors, why we started going to other districts and other regions in the state so we could get replenished, so we could continue operating and battling the storm as it went on,” Ferguson said.

TxDOT is now conducting an after-action review to find out what could be done differently for a future storm.

The same kind of review is happening at Austin Public Works, which was operating under a plan from May 2019.

“Our preparations for this event were very adequate and appropriate based on our experience and the resources that we have,” said Richard Mendoza, director of Austin Public Works.

The agency used 22 trucks to treat more than 300 miles of roads that lead to the city’s critical infrastructure, according to the Public Works department. But there are more than 7,000 lane miles in the entire city.

Mendoza estimated in an interview with KVUE that only 25% of the City’s response was proactive, with the other 75% being reactive.

“The balance of that work was to respond to requests through our emergency operations center for treatment of roads around high-priority locations,” Mendoza said.

Austin Public Works' review will include the possibility of having contracted crews on standby or the use a different type of material to treat roads in a future storm.

One problem that exists for both TxDOT's Austin region and Austin Public Works: Neither agency owns a single snowplow.

Williamson County resident Lynn Campbell didn’t have running water at her home and needed food during the storm. She had to drive to her friend’s house to take a shower, just like many Central Texans.

“The road conditions were, to me, appalling,” Campbell said. “Once I got out in my car and on the roads, I was extremely frustrated with what I encountered. The roads were covered.”

Coming from upstate New York, Campbell knew how winter weather was handled in that region and had hope, despite state and local officials urging residents to stay home or drive slowly if they had to.

While a snowplow is a big cost for an area that doesn’t see much winter, Campbell said it’s a cost that’s worth it.

“As a taxpayer, I think that every town, city in Texas should have that equipment to be prepared to deal with these storms,” Campbell said. “We need to be prepared. We need to step up our game and have the equipment.”

The City of Austin is analyzing the cost of a fleet of trucks and snowplows, or other options for keeping roadways clear for a future winter storm, according to a spokesperson for the Austin Public Works department.

Based on a preliminary estimate, 20 trucks and plows would be needed to clear Austin’s major arterials – roads like Lamar and Burnet – within 24 hours of a snowfall event. An initial analysis shared with KVUE shows that would cost a minimum of $2.9 million for purchasing the trucks and plows – not including the maintenance or storage.

The public works spokesperson told KVUE the trucks could be used for other functions in addition to snow removal, but the department is still exploring other types of equipment that could be used. Austin Public Works has not said when it will decide on whether to make the purchase, which is part of the ongoing review.

St. Edwards becomes one of the first universities in nation to require COVID-19 vaccine this fall for in-person activities