The aircraft flew over Austin and San Antonio on Wednesday, May 13. 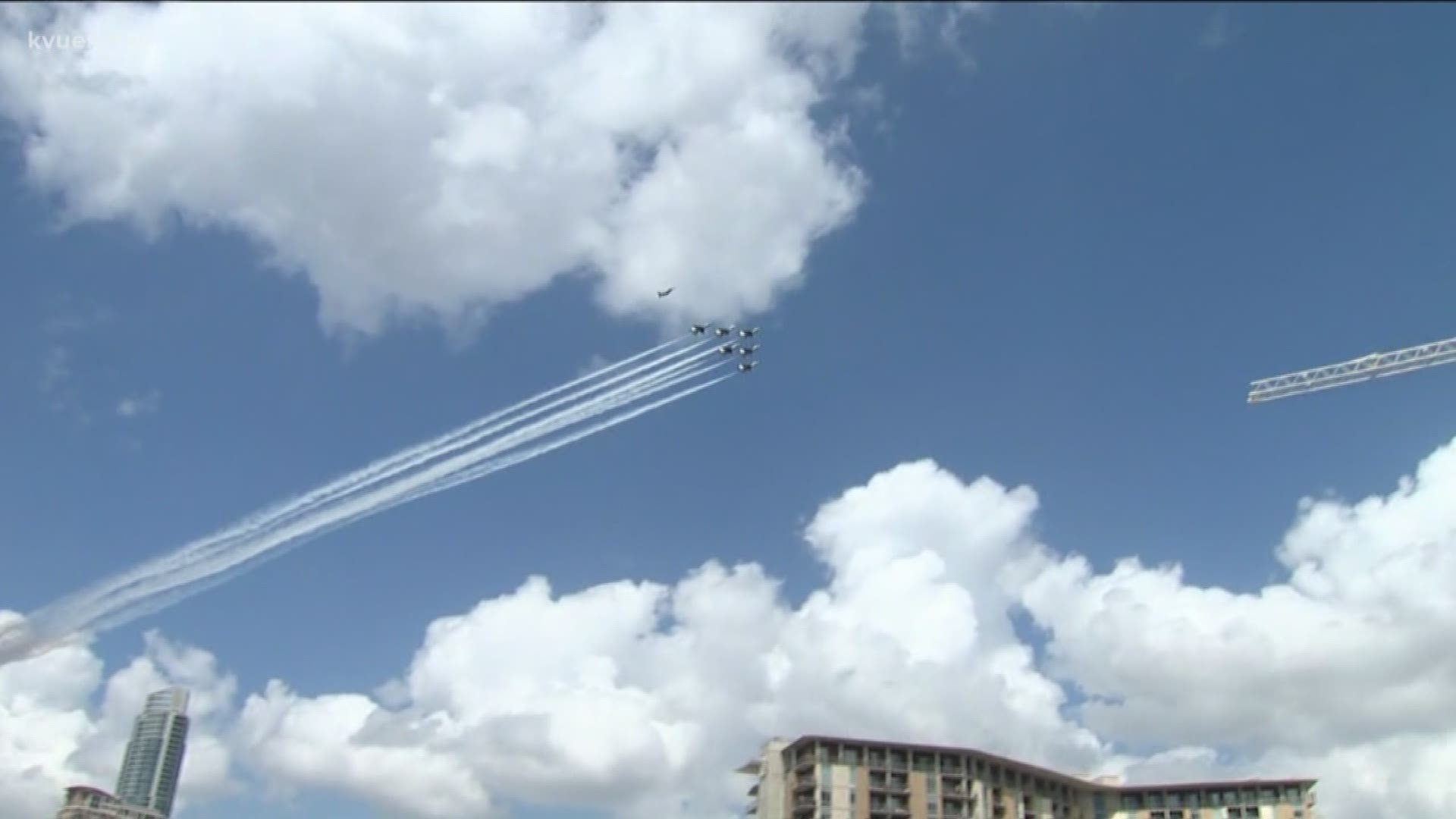 AUSTIN, Texas — The U.S. Air Force Thunderbirds will be honoring frontline COVID-19 responders and essential workers with flights over San Antonio and Austin on May 13.

The flyover was originally scheduled to take place on May 12, but due to inclement weather, it was rescheduled for May 13. Additionally, the time for Austin's flyover was changed from 2:30 p.m. to 2:40 p.m. On Tuesday, the Thunderbirds said the flyover could again be delayed or postponed thanks to weather.

On Wednesday morning, the Thunderbirds said the flyover would be delayed nearly an hour, with the Austin flyover beginning at approximately 3:40 p.m. instead of 2:40 p.m.

WATCH THE FLY OVER HERE (Coverage starts at 6:55 in the video):

The planned flight path will begin near Leander and head through Cedar Park, Georgetown and Round Rock before looping through Pflugerville and central Austin. The flight path then head out west toward Lakeway before going south over Buda and ending between Kyle and San Marcos.

The Austin Animal Center has urged dog and cat owners to bring their pets inside before the show, as the accompanying sound can be loud and frightening.

"Take a nice long walk before the event to tire out your pups, or leaving the TV on inside may help keep your pets relaxed during the show," the shelter said on Twitter on Wednesday.

“We are honored to extend our gratitude to Texans in San Antonio and Austin who have been working hard to keep their communities strong,” said Lt. Col. John Caldwell, Thunderbirds commander and leader. “We want Texans to look up to see the display of American resolve and know that the American spirit will prevail beyond this difficult time in our nation.”

A formation of 6 F-16C/D Fighting Falcons will conduct the flyovers as a salute to healthcare workers, first responders, military and other essential personnel while standing in solidarity with all Americans currently facing the COVID-19 pandemic.

Watchers along the flight path can expect to hear a few moments of jet noise as the planes fly by, along with the sight of six high-performance aircraft flying in formation.

Viewers are asked to maintain social distancing practices and should also refrain from traveling to landmarks, hospitals and gathering in large groups to watch. A detailed flight route is expected to be released on the day prior to the flyover.

The flyovers are subject to change due to weather and operational requirements.