VERIFY: Who's paying for Texas Democrats' trip to Washington?

The House Democrat trip could turn out to be quite costly, so we wanted to VERIFY: who’s picking up the tab? 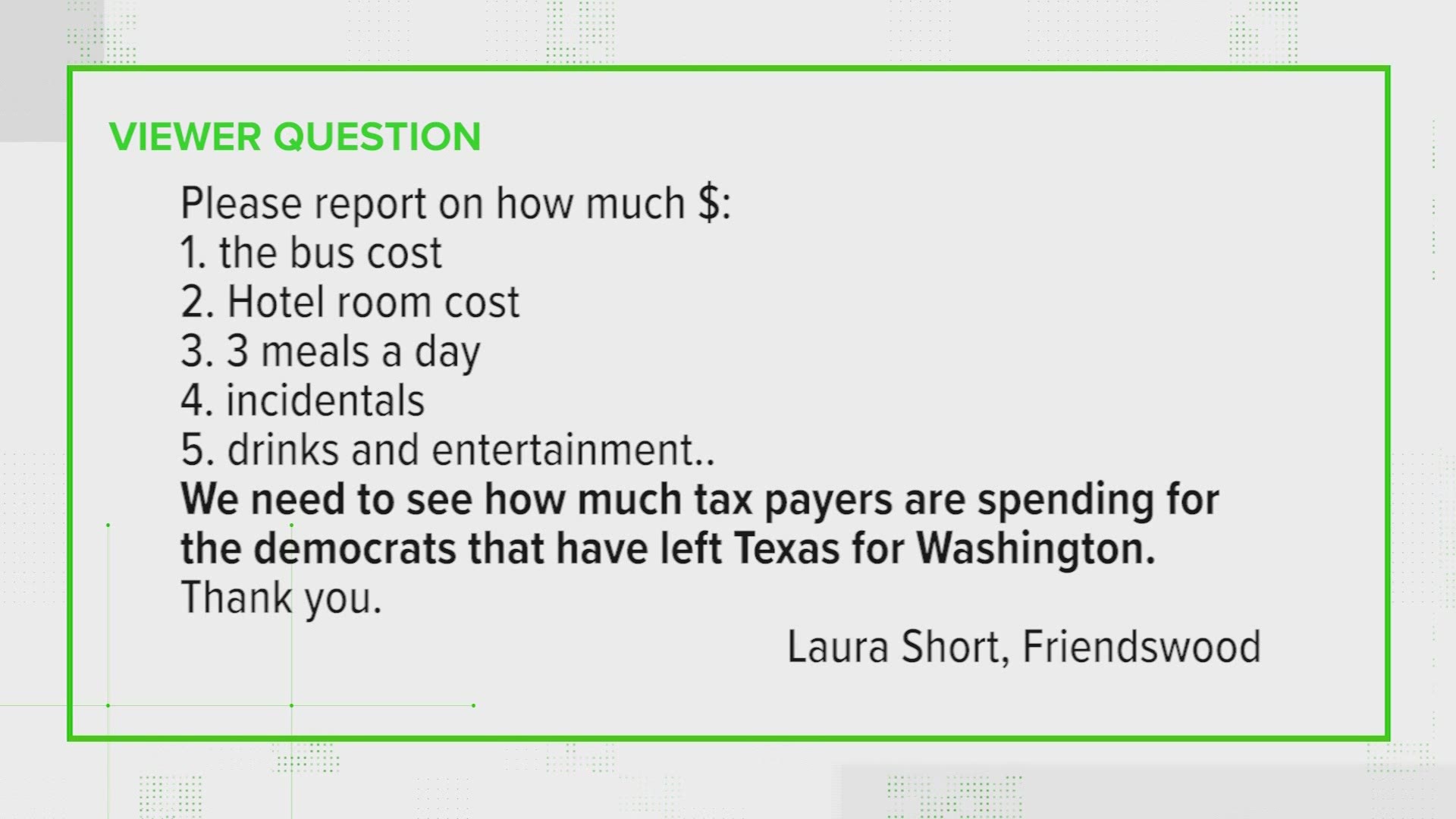 HOUSTON — It was sudden and unexpected, and it’s left a lot of people asking questions about the House Democrats' trip to Washington D.C.

One of those questions: Who’s paying for this trip?

The House Democrat trip could turn out to be quite costly, so we wanted to VERIFY: who’s picking up the tab?

In an interview, Texas Governor Greg Abbott called the trip a “taxpayer junket.”

“Your audience is paying for this junket trip that they’re taking to get away from Austin while they’re not doing business. This is costing taxpayer money," Gov. Abbott said.

And that left many with questions.

Laura Short from Friendswood asked, "Please report on how much $: 1. The bus cost, 2. Hotel room cost, 3. 3 meals a day, 4. Incidentals, 5. Drinks and entertainment.. We need to see how much tax payers are spending for the democrats that have left Texas for Washington. Thank you."

WHO PAYS? That's the big question so many of you are asking us to find out. We VERIFY tonight at 10

So we went straight to the House Democrats themselves for the answers.

Our source: Houston Representative Ann Johnson who is in Washington D.C.

“This is not a taxpayer-funded event. This is a Democratic campaign-funded event," Rep. Johnson said.

She says much of the trip is being funded through the Texas House Democratic Caucus, which has a donation link on its website. She says that’s in addition to individual campaign funds.

“That House Democratic Caucus is paying for this trip. And we are funded by our campaigns. This is a combination of us coming together to recognize that the funds that we have for our campaign are needed to make sure we could keep doing our job for Texas," Rep. Johnson said.

Representatives of the caucus also tell us the planes were donated, and the hotels are paid for by campaign and caucus accounts.

So we can VERIFY the claim is false. House Democrats are not using taxpayer money to fund their trip to Washington.

Another donation fund has been created to help support the Texas Democrats, many of whom had their paychecks suspended by the governor last month after their walkout in May. Democrats are now suing the governor over that.