Ralph Edelbach of Cypress, an 82-year-old voter among those suing Abbott, will have to travel 36 miles to reach the only location Abbott has allowed to stay open. 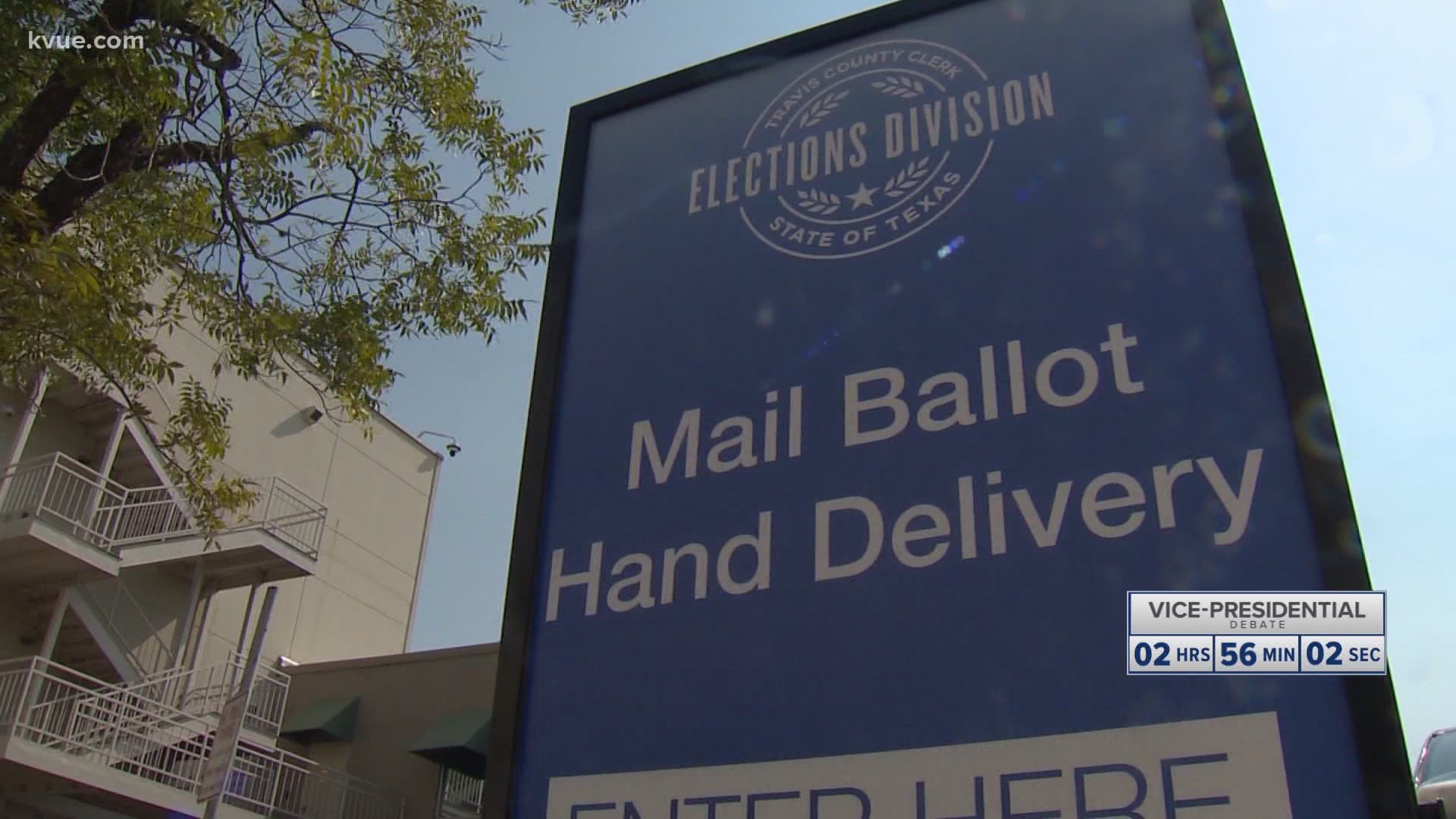 TEXAS, USA — Voting rights advocates and civic groups rushed to the courthouse Friday in a bid to block Republican Gov. Greg Abbott's Oct. 1 order allowing Texas counties no more than one drop-off location for voters casting absentee ballots. They call the directive an unconstitutional burden on the right to vote that will disproportionately impact voters of color in the state’s biggest cities.

The Texas and National Leagues of United Latin American Citizens, the League of Women Voters of Texas and two Texas voters asked a federal judge in Austin to overturn the governor’s order, which forced Travis and Harris Counties — two of the state’s most important Democratic strongholds — to shutter a number of drop-off sites they had already opened this week.

“The impact of this eleventh-hour decisions is momentous, targets Texas’ most vulnerable voters—older voters, and voters with disabilities—and results in wild variations in access to absentee voting drop-off locations depending on the county a voter resides in,” attorneys for the groups argued. “It also results in predictable disproportionate impacts on minority communities that already hit hardest by the COVID-19 crisis.”

RELATED: Important election deadlines: Texans have until Monday to register to vote

Unprecedented numbers of Texas voters are requesting mail-in ballots for the highly charged election underway as the nation is in the grip of the coronavirus pandemic. Many of those voters are expected to drop-off their ballots in person rather than entrusting them to the U.S. Postal Service, which has been plagued by cutbacks and doubts over its ability to deliver ballots early enough to be counted.

Ralph Edelbach of Cypress, an 82-year-old voter is among those suing Abbott, had planned to drop his ballot off at a Harris County location that was 16 miles from his home — but now will have to travel 36 miles, nearly 90 minutes round trip, to reach the only location Abbott has allowed to stay open, according to court documents.

Edelbach said he and his wife have been staying in because of COVID-19 and they don't feel safe voting in person.

"When I found out that they were closing the center that was about 16 miles from here, I got very disturbed. And I called and left a message with the Governor’s office. Never heard back from them," Edelbach said. "I called the state Democratic group. They called back and said that they were having a suit and did I want to be a plaintiff. I said, 'absolutely. Yes.'"

Attorneys also pointed out that Abbott was making a major change to election procedures just weeks away from an election — an action the state and its attorneys argued was improper in a separate federal lawsuit over straight-ticket voting.

Unprecedented numbers of Texas voters are requesting mail-in ballots for the highly charged election as the nation is in the grip of the coronavirus pandemic. Many of those voters are expected to drop off their ballots in person rather than entrusting them to the U.S. Postal Service, which has been plagued by cutbacks and doubts over its ability to deliver ballots early enough to be counted.

Texas Republicans have vigorously fought efforts to facilitate increased mail-in balloting, particularly in Harris County, the state's largest and a Democratic stronghold where voter turnout could prove pivotal in this year's election.

Harris County is home to 2.4 million registered voters and stretches across some 1,700 square miles, more than the entire state of Rhode Island.

Spokespeople for the governor and Texas attorney general did not immediately return requests for comment.

The lawsuit will have to move quickly, with early voting set to begin in less than two weeks on Oct. 13.

Voting rights experts say access to these locations is especially important given concerns over U.S. Postal Service delays and that closing them will disproportionately impact voters with disabilities or without access to reliable transportation.

At a press conference Friday morning, Harris County Clerk Chris Hollins said he could reopen the shuttered locations "at the drop of a dime."

“Ultimately, anything that’s done to decrease voter convenience, to put obstacles in the way of the voter, is voter suppression, and will lead to disenfranchisement,” he said.

Abbott’s order, which came a day after the Texas solicitor general approved Harris County’s plan for multiple locations under earlier guidance from the governor, also said counties must allow poll watchers to observe goings-on at ballot drop-off sites. Voting rights advocates fear that poll watchers, who are selected by candidates or political parties, will seek to intimidate voters, as has been documented in the past.

Abbott claimed the limits on drop-off locations were necessary to ensure election integrity. But he provided no evidence that the drop-off sites enable voter fraud, which experts say is rare.

And the procedures for delivering an absentee ballot are strict. Voters must present an approved form of identification, show up during specified hours and can only deliver their own ballots.

Texas is one of just a few states that is not allowing all voters to cast their ballots by mail during the coronavirus pandemic. Beyond extending the early voting timeframe, the state has done very little to expand Texans’ options for voting safely this fall. And its criteria for absentee ballots are unusually strict: Voters can vote by mail only if they are 65 or older, confined in jail but otherwise eligible, out of the county for the election period or cite a disability.

The Texas Supreme Court has said that lack of immunity to the novel coronavirus does not itself constitute a disability, but that voters may consider that alongside their medical histories to decide whether they qualify.

Ross Ramsey contributed to this report.

This story was originally published at TexasTribune.org. The Texas Tribune is a nonprofit, nonpartisan media organization that informs Texans — and engages with them — about public policy, politics, government and statewide issues.