Logan police said one of the women, identified as Alecia Kitts, was asked to put on a mask by Officer Chris Smith, who is the school resource officer. 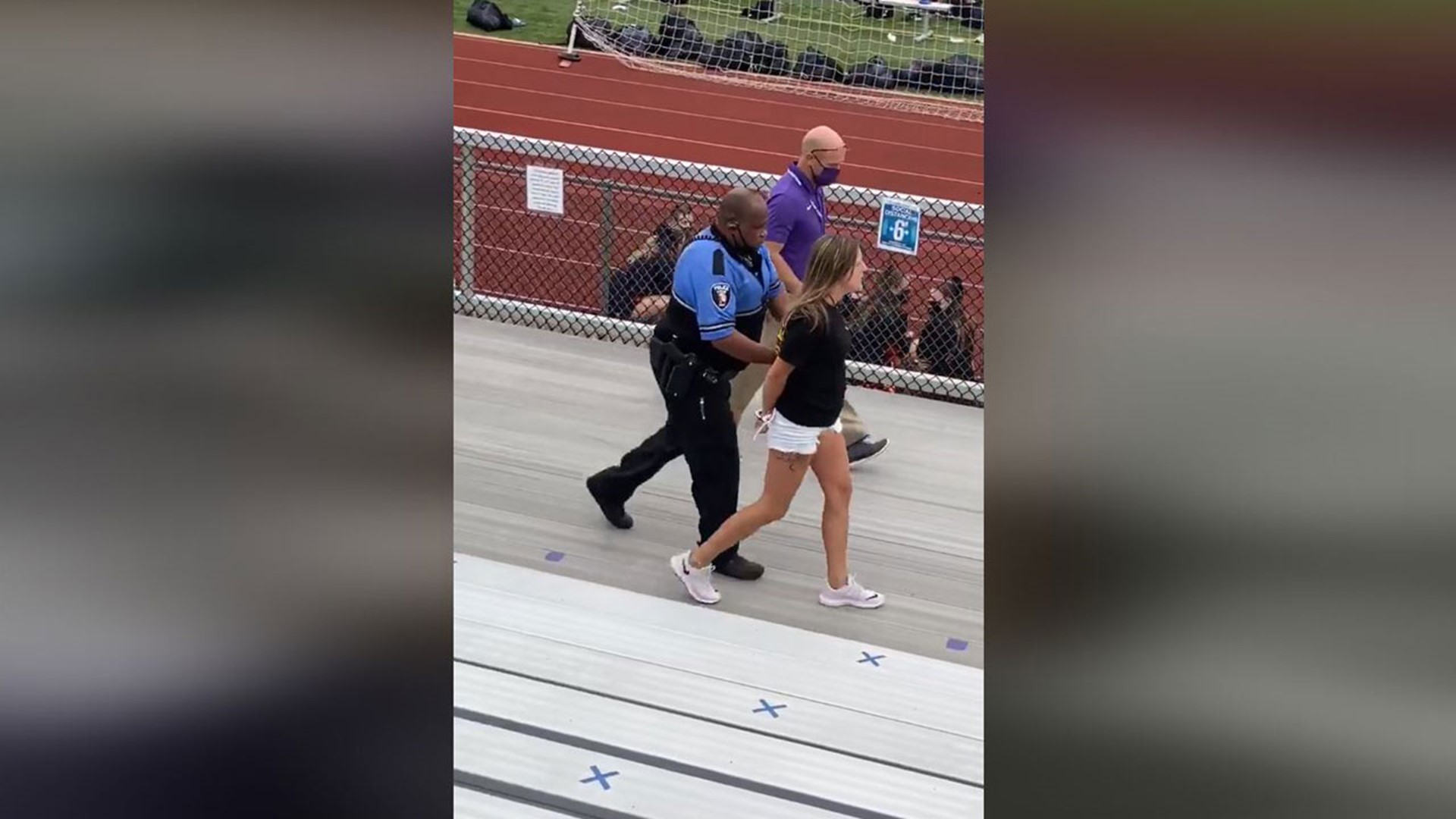 Two women are charged in connection to a dispute over a mask requirement at a football game in Logan.

One of the women, Alecia Kitts, is charged with trespassing and resisting arrest after refusing to leave a middle school football game in Logan when she was asked to put on a mask and she refused.

Logan police said Kitts was asked to put on a mask by Officer Chris Smith, who is the school resource officer.

WARNING: Video contains language that some viewers may find offensive.

One of Smith's assignments is to make sure people comply with health and safety guidelines from the CFC, Ohio Department of Health, Ohio High School Athletic Association and the Logan-Hocking School District.

Smith saw Kitts not wearing a mask and asked her to put one on, according to a release from a release by the Logan Police Department. Kitts said she had asthma and was not going to put on a mask.

The officer says he told Kitts she needed to put on a mask or she would be asked to leave. Police said Kitts refused and Smith told her if she did not leave, she would be cited for trespassing and escorted away.

Police said after several tries to have her leave, Smith told her she was under arrest for criminal trespassing and asked her to put her hands behind her back.

She resisted and police said another woman, Yvonne Coyler, interfered.

According to police, Smith asked Kitts to comply or he would use his taser. When she continued to resist, Smith used his taser to stun Kitts once in her shoulder.

Smith was then able to place Kitts under arrest and walked her out of the stadium with help from another officer. Police said she tried to pull away while being escorted out.

Kitts was charged with criminal trespassing and released from the scene. She was later charged with resisting arrest as well.

Coyler was also charged in the incident.  Police said she is facing a charge of obstructing official business.

Video of the incident spread online Wednesday after it happened.

Members of the crowd can be heard remarking about her not wearing a mask and reacting in surprise to the confrontation. It appears everyone else in the stands surrounding her is wearing a mask.

During a middle school football game held at Logan-Hocking Local School District on the evening of Sept. 23, 2020, an attendee was asked to comply with the Ohio High School Athletic Association’s and the athletic facility’s policies. The attendee refused to do so and consequently was asked to leave by the attending law enforcement officer. After resisting the request to exit the premises, the individual was apprehended at the discretion of the attending law enforcement officer. The school district is not able to comment further on details of the incident due to the ongoing investigation.

He said Kitts is a fan of the opposing team.

Bainter said Friday the school had signs posted saying masks need to be worn and the public address announcer said several times that masks are required.

In a statement, Kitts' lawyer Maurice Thompson also said Kitts has asthma and should be exempt from the mask rule.

He said the district "totally misapplied the law, and misapplied it haphazardly and violently."

Bainter said Logan-Hocking school buildings were placed on lockout Thursday after receiving non-specific threats related to the mask incident. There was no lockout on Friday.