Members of both the Senate Democratic Caucus and the Senate Republican Caucus called in lawmakers from Washington to weigh in on the situation at the Texas-Mexico border. 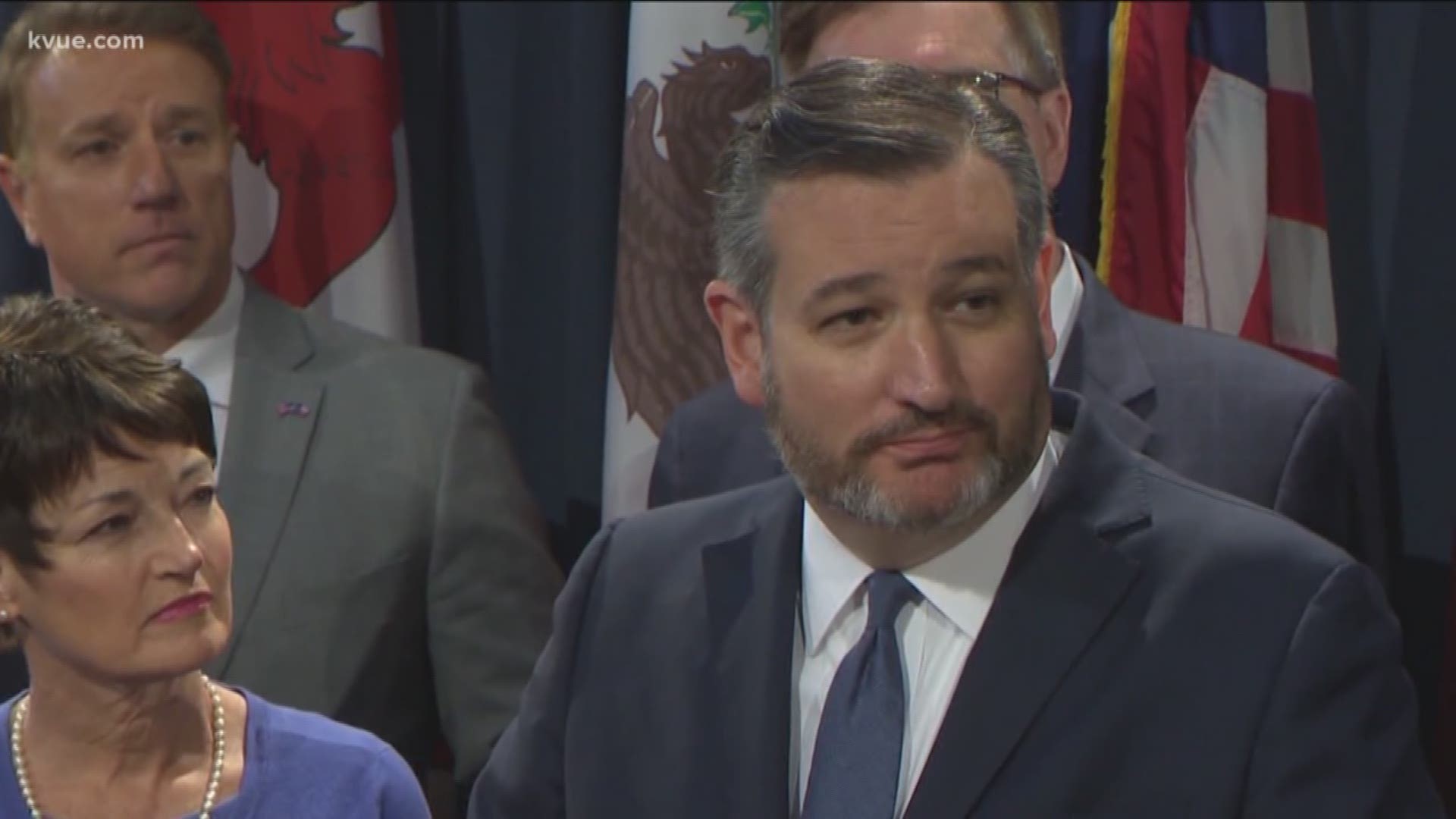 AUSTIN, Texas — It seems this piece of paper is causing controversy at the Texas Capitol. Two weeks ago, the Texas Senate took up and passed Senate Resolution 535, declaring an emergency at the Texas-Mexico border.

"They tied up the Senate for a campaign statement, putting it on our desk minutes before calling it for a vote with no notice to Democratic senators who actually represent the border, like myself," said State Senator Jose Rodriguez, who is the chair of the Senate Democratic Caucus.

U.S. Senators John Cornyn (R) and Ted Cruz (R) were in Austin Wednesday, so the Senate Republican Caucus invited them to hold a joint a news conference on the resolution. But an hour before it started, the Senate Democratic Caucus and U.S. Congressman Joaquin Castro (D-San Antonio) held their own news conference.

"We agree that there is a humanitarian situation. But we also believe that Senate Resolution 535 plays right into Donald Trump's hands," said Castro.

Members of the caucus noted Congress voted to overturn the president's executive order to declare an emergency at the border and use funds to construct a border wall. And they blasted the president's recent comments about closing the border.

"It would be a disaster if President Trump shut down the U.S.-Mexico border and Senate Resolution 535, unfortunately, is complicit in that and, as I see it, encourages that," Castro added.

The Democrats condemned the Republicans, saying they won't work with them to find solutions.

"We all believe in having a strong border, but we also believe in having a humanitarian policy," said Senator Jose Menendez (D-San Antonio). "And what is so hypocritical about the president's stance on this is how can we have the foreign policy that we have towards Cuba, where if a refugee arrives and lands on the beaches of the United States, they're automatically granted asylum and refugee status. Why is it that they can be respected and they can be treated as a humanitarian crisis and refugee status, but people who are escaping fearing for their lives with their children from Central America ... where gangs have taken over, they're not, literally, their fear is not real? This is a hypocrisy."

"We have a situation, unfortunately, where the Texas Senate is now doing the same thing that our United States senators are doing," added Castro. "Which is either they're going along with the president willingly or they're too weak and timid to stand up to the president."

Castro said the acquisition of Texas land to build a border wall will be the largest land grab in Texas.

"The U.S. senators right now in Washington are too afraid of President Trump to stand up to the president and to stand up for Texas," Castro added. "And, so, hundreds of miles of Texas land and property are going to be taken. Little kids are separated from their parents, and our senators hardly say a word."

An hour later, in the same room, Republicans held their news conference.

"The sky is blue. Water is wet. And we have a crisis at our southern border," said Senator Ted Cruz, pointing out that Texans appreciate when their lawmakers state the obvious.

Overall, it was a similar message, delivered from the other side of the aisle.

"We have human slavery today with children and women in the state of Texas and all over this country, and they're coming through the border and the Democrats will do nothing to save these women and children," said Lieutenant Governor Dan Patrick. "Nothing! They're deniers and deceivers."

"The biggest threat that Texas faces is an unsecure border," said State Senator Donna Campbell (R-New Braunfels). "Our law enforcement is stretched thin, and criminals are exploiting the situation for their own gain. This is inhumane. We cannot adequately address the existing humanitarian crisis and stop those who wish to do our country harm without a functioning border and immigration system."

As the Republicans held their news conference, a group of about 50 people rallied outside the Senate chamber calling for compassion and action.

Lawmakers from both parties admitted there are no conversations happening between them on how to address the border, but Senator Jane Nelson (R-Flower Mound), chair of the Senate Finance Committee, noted the Senate did unanimously pass a budget that includes $800 million for border security.