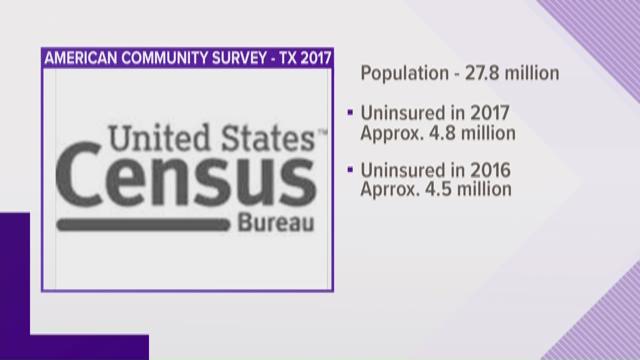 AUSTIN — A recent survey by the Episcopal Health Foundation revealed more than half of Texans think the state is doing far better than it actually is when it comes to health care and health insurance.

The reality is Texas ranks dead last. There are more uninsured people in the Lone Star State than anywhere else in the country.

Thursday, the U.S. Census Bureau released its annual American Community Survey reflecting data from 2017. It is full of information on a wide range of subjects, including health care.

The big takeaway when it comes to health care is that Texas has some work to do.

So, if you have insurance, how does this impact you?

The answer is, in more ways than one, it's costing you money. Texas is one of 16 states that doesn't have Medicaid for adults, which means the state doesn't get federal money to help those low-income adults.

Anne Dunkelberg, associate director of the Center for Public Policy Priorities, explained that means the responsibility falls on local government.

"Because the legislature's chosen not to cover adults and Medicaid for adults, for example, we see those costs being shifted to particularly our urban counties," said Dunkelberg. "So, like Central Health in Travis County, the other big urban centers all have health care districts as well, those are supported with property taxes. And so to the extent we're not taking care of those things through the state budget, they get pushed out and they drive up your property taxes."

While the insurance data looks bleak, there is some good news coming out of the report. Median incomes in Texas slightly increased in 2017 by 2.5 percent, and the overall poverty rate dropped to the lowest it's been in 10 years. It's important to note though that while the poverty rate dropped, there are still about 4 million Texans living in poverty.

Dunkelberg said if people want to see changes in the statistics, they should talk with their lawmakers about what their priorities are and how they want their tax dollars spent.