Dr. Mark Escott with APH said the goal is to keep the seven-day average of daily new hospitalizations below 20. 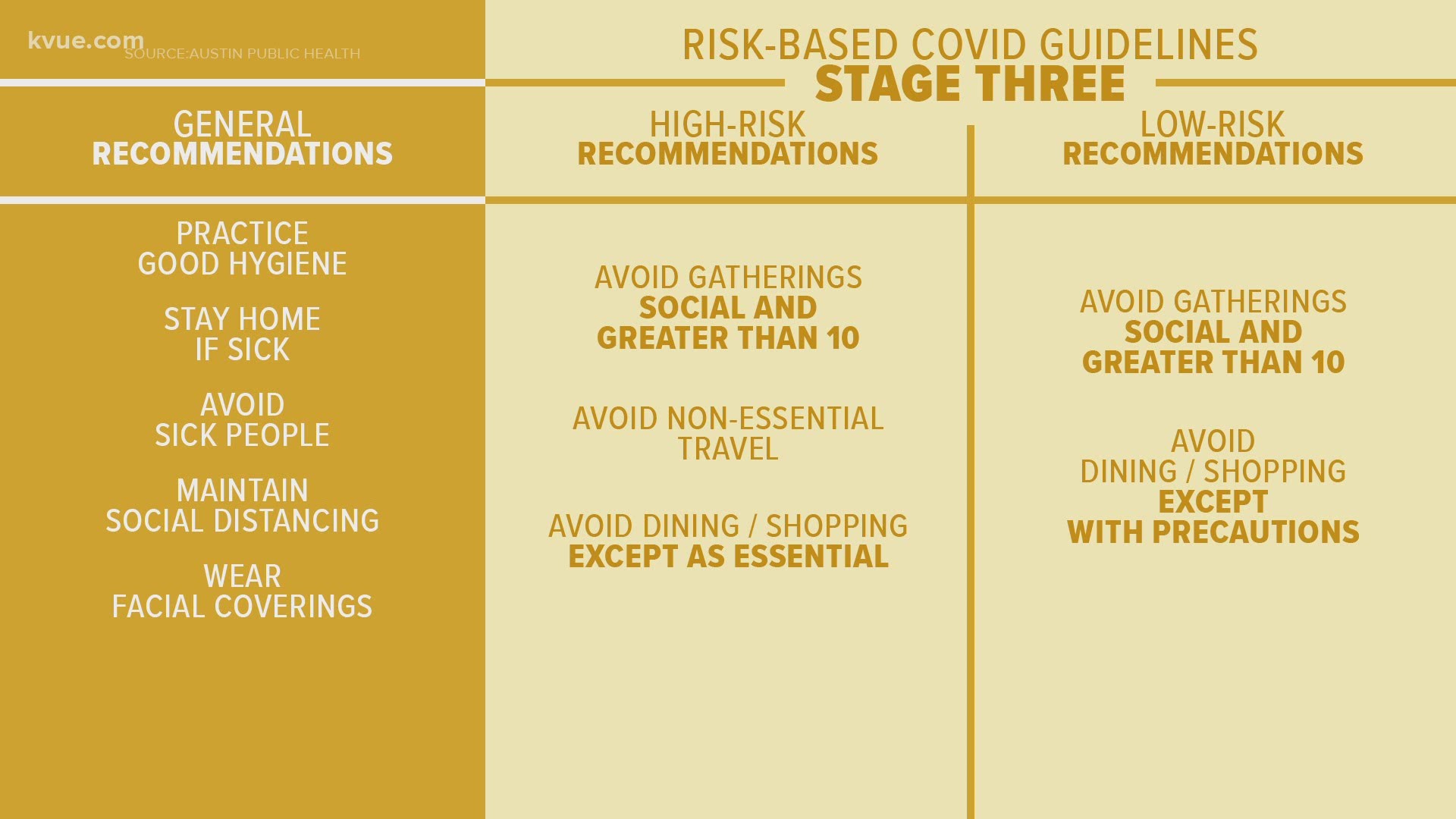 According to the guidelines, Stage 3 indicates a seven-day rolling average of five to 19 daily hospital admissions for COVID-19.

RELATED: 'We can protect the economy while protecting our public health' | Austin leaders share risk-based guidelines to stay safe during COVID-19

Since March, the seven-day average has moved between eight to 10 daily hospitalizations, Dr. Escott said. The goal is to keep that number below 20 to limit the risk of exceeding hospital capacity.

“We're going to experience excess death [if we exceed hospital capacity]. This means we’ve run out of hospital beds to care for people, not just for COVID-19, but for everything else," Dr. Escott said.

Stage 5, which would indicate a seven-day rolling average of more than 70 daily admissions, would call for all nonessential businesses to close. City and county leaders would have to work in conjunction with state leaders to make that happen, Mayor Adler said.

Dr. Escott said Austin and Travis County can remain in Stage 3 if people continue to social distance, practice personal hygiene and wear a mask in public.

Austin Public Health will soon update its COVID-19 dashboard to include the number of new daily hospitalizations and a seven-day rolling average.

"Every day, we should be looking at that chart," Austin Mayor Steve Adler said Thursday. "If we can get below that, to the blue area, we can start opening up even more. If we get to 20 [daily admissions], we’re on a path to overwhelm our hospitals, and we’re going to have to pull back, and nobody wants to do that."

During the press conference, city and county leaders discussed the videos over the weekend that showed crowded bar patios where people were not practicing social distancing or wearing masks.

"I hope that was a weekend adjustment in the new world we’re in because we can’t sustain that," Mayor Adler said.

"Those were troubling videos that were sent over the weekend. Fire marshal went out to investigate, and we’ve reached out to promoters responsible for the event," Eckhardt said. "We will be rigorously enforcing with regard to mass gathering permits."

Eckhardt said the goal isn't to punish business owners but rather to educate them about the "very serious" risks they're putting their patrons in.

"COVID-19 is not done with us yet. But the best medical and scientific advice ... is to keep practicing social distancing, face masking, personal hygiene, avoiding gatherings of 10 or more and stay home when you’re sick," she said. "We don’t want to go back. We want to go forward into real-world adaptations while COVID-19 is still a threat."

As of Thursday afternoon, there were a total of 97 people hospitalized across the five-county metropolitan statistical area, which includes Bastrop, Caldwell, Hays, Travis and Williamson counties. Forty-one people were being treated in the ICU, and 21 people were on ventilators.