No longer in training, a 1-year-old Austin puppy has officially become Texas' first therapy dog and is now certified to console people during their most trying moments -- funeral services. 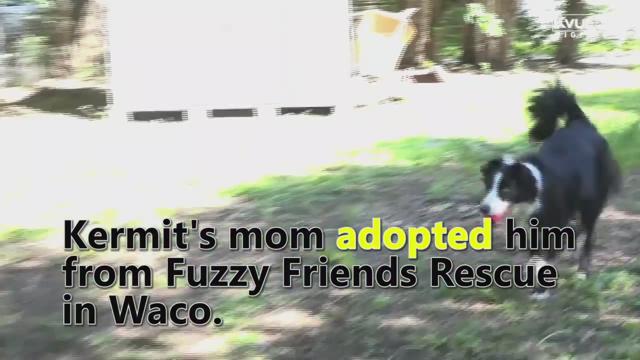 No longer in training, a 1-year-old Austin puppy has officially become Texas' first therapy dog and is now certified to console people during their most trying moments -- funeral services.

Kermit's owner, Melissa Unfred who goes by the Modern Mortician on Instagram, announced the news Thursday. She said he went through extensive training and had to pass "a strict and thorough evaluation that tests the dog's obedience and temperament."

Kermit offers comfort to a mourner at a recent funeral service. He is the 1st and currently ONLY certified grief therapy dog in Funeral Service in Texas. Just because a dog is at a funeral home does not make it a therapy animal. A therapy dog is one that is credentialed because it has undergone a great deal of training and has passed a strict and thorough evaluation that tests the dog's obedience and temperament. Because puppies are so young and unpredictable, dogs can not be assessed as therapy dogs until they are over a year old. #GriefTherapyDog #grieftherapy #themoreyouknow🌈 #KermitTheDog #themodernmortician #funeraldog #funeraldirector #deathpositivepup

A post shared by The Modern Mortician (@mod_mortician) on

Unfred said Kermit's calm demeanor and positive energy is what lead her to want to get him certified as a grief therapy dog. Many people at the funeral home Unfred works at, Affordable Burial and Cremation, agree and note that Kermit is like a "chameleon", whereas he knows when to console the people who are hurting most.

1 / 4
<p>Kermit consoles a mourner at funeral service in Texas.</p>

When KVUE first reported Kermit's story, he already had his good citizenship certification. It wasn't until his first birthday on April 16 that he was officially certified as a funeral therapy dog. Unfred said the certification takes a year because puppies can be "young and unpredictable."

Unfred said Kermit will work with the community through the Austin Dog Alliance as a volunteer therapy dog, as well as with Affordable Burial and Cremation.