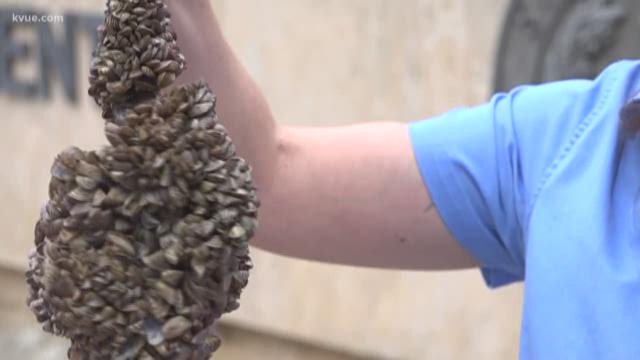 Zebra mussels have now been spotted in Lady Bird Lake while Lake Austin is now infested with the invasive species, according to Texas Parks and Wildlife Thursday.

The mussels were found in Lake Austin in August 2017, but the lake has now become infested due to the reproduction of zebra mussels, the agency said. TPWD, along with the Lower Colorado River Authority (LCRA), found several classes of zebra mussels and larvae in the Tom Miller Dam and by Pennybacker Bridge as of February 2018.

Larvae were found at least once in Lady Bird Lake, according to TPWD.

What is a zebra mussel?

In addition to damaging your boat, Texas Invasives said zebra mussels, which are known for their distinctive zebra-striped shell, are dangerous for many other reasons. They can disrupt water supplies by colonizing inside pipelines and damaging water intake structures that provide water to thousands of homes and businesses. They can also take over habitats from native species, damaging lake ecology and affecting fish populations.

“When zebra mussels were found in the Colorado River Basin we knew it was likely that larvae would disperse and invade downstream water bodies,” said Monica McGarrity, TPWD Aquatic Invasive Species team lead. “But downstream dispersal doesn't spread zebra mussels to new river basins – boats do — and boats can spread them downstream more quickly. Texans can protect other river basins and prevent zebra mussels from spreading more quickly to other reservoirs by being extremely diligent about cleaning, draining and drying their boats and other gear every time they visit any lake or river.”

The City of Austin encourages anyone who swims in the local lakes or swimming holes, including Barton Springs Pool, to thoroughly clean and dry all swimsuits and swim gear.

TPWD is monitoring risks for Texas lakes and reminding those who participate in water sports to clean and dry their equipment thoroughly.

Zebra mussels came to the United States from Europe. They were first seen in Texas in 2009 and it was five years ago that they were first spotted in Belton Lake, west of Temple.

"Zebra mussels spread rapidly, grow rapidly, they take over and they cause a lot of problems," McGarrity said.

Zebra mussels can grow up to two inches in size and cling and clog whatever space the take up.

"They can clog a pipe up to 14 inches in diameter completely. They can be really problematic for infrastructure and any facility whether it's hydroelectric or water supply, anything that's using raw surface water," McGarrity said.

Once they've stuck on to something,they're very hard to remove, which is why McGarrity stresses it's so important for every boater to clean, drain and dry their boat when they take it out of the water.

"You can clean them with hot high-pressure water and water over 140 degrees will kill them," McGarrity said.