Texas Gov. Greg Abbott appeared live on KVUE, where he spoke on his Phase 2 plan to reopen Texas, vote by mail and more. 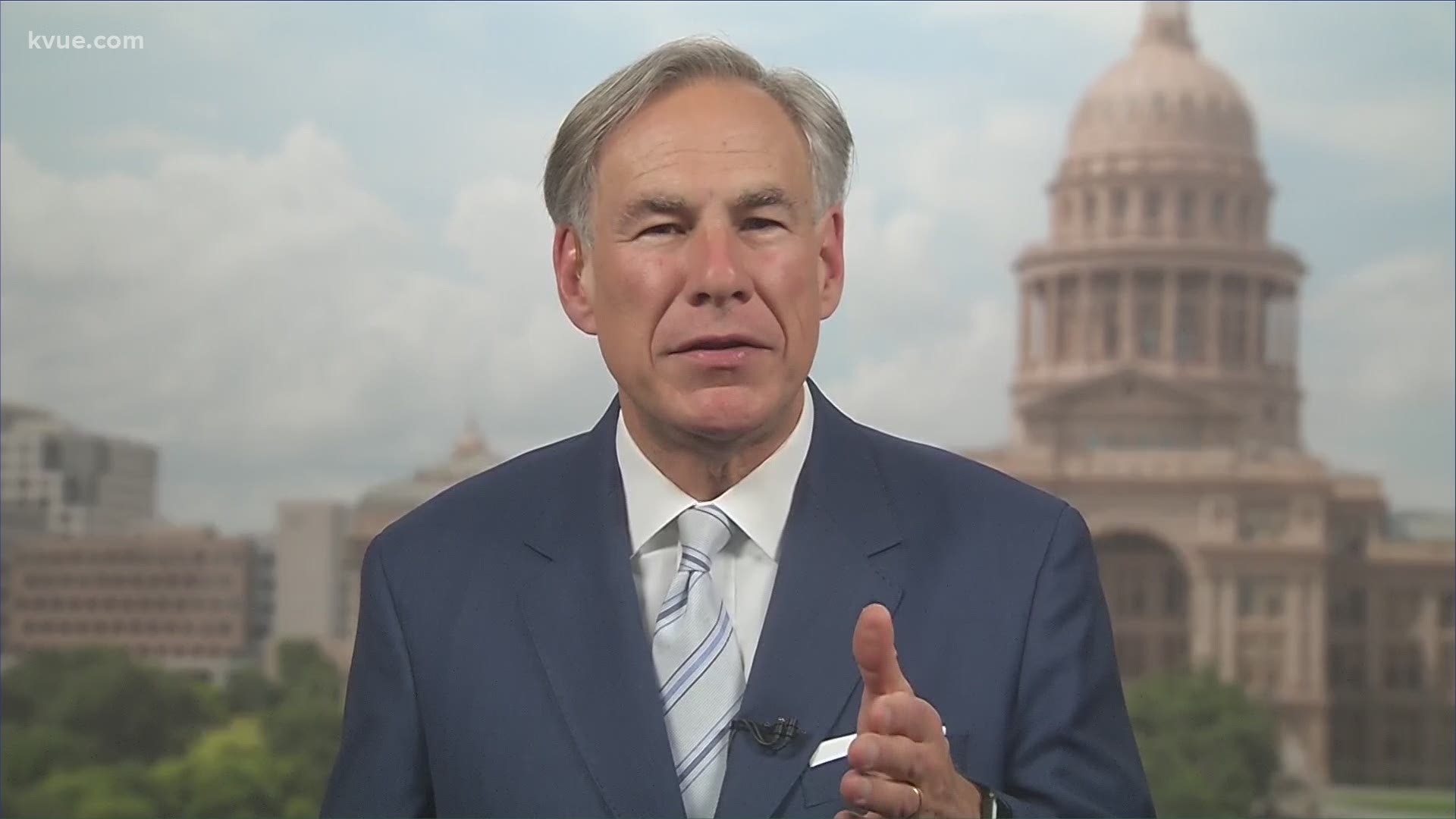 Here is a transcript of the live interview:

GOUDEAU: This decision is backed unanimously by doctors and driven by data, but you also said you want people to know COVID-19 is still in Texas. Talk to us about the balance you're trying to strike here with co-existing with this virus.

ABBOTT: Sure, so what we have seen is even during the time of the stay-at-home policy, there were more than half of the businesses in the state that were operational, such as grocery stores, construction and things like that. Then, in Phase 1, there was even more open, such as restaurants and retail centers, etc. During the entirety of that time, we saw an ongoing downward trajectory of the positivity rate. That is the percentage of people who were tested versus the people who tested positive. That is the criteria that the White House Coronavirus Strike Force says to look at. So, that shows Texas, as a state, and the people here in Austin are doing a good job to slow the spread of the coronavirus. However, because COVID-19 still exists in Texas, and because there is not yet a cure for it, that means as we open up, we need to maintain the safe distancing practices. Bars need to do the same thing as they open up. If everyone can be safe as we open up, it means we can engage in business even more.

GOUDEAU: Is there a marker for you – some data set – that would make you say "perhaps we need to slow down on re-opening?"

ABBOTT: Sure. There is a couple of data that we look at which are very important. First and foremost, what is the hospitalization rate and what is the hospitalization capacity. We never want to be in a situation like where New York was in where they didn't have enough hospital rooms to take care of everybody. Or maybe they ran out of ventilators. We have plenty of hospital rooms and we have plenty of ventilators. We have plenty of ability to take care of people. The other thing is we look for spikes. It could be spikes in the number of people testing positive, but more likely we are looking at spikes in the positivity rate. Sometimes that happens, as in right now in the Amarillo area where there is a spike connected to meatpacking facilities there. Hence, they were not able to open up right now like other places in the state of Texas. We have surge response teams in there working to corral the coronavirus at that particular location. We've done this many times across the state. It takes about a week to stabilize it. And then everything proceeds normally.

GOUDEAU: You've outlined very specific opening dates – criteria for businesses and even protocols for customers to follow. How is all of this being enforced – particularly now that jail time is off the table for people who violate your orders?

ABBOTT: So listen, there is always different mechanisms for enforcement. One was jail time and in a pandemic situation like this, I just thought jail time was not an appropriate standard for someone who is trying to run a business and is unable to do so due to no fault of their own. There are other types of enforcement still defined that is in there. And then there is what you would call regulatory enforcement, as you and your viewers may know, there's the TABC, Texas Alcohol Beverage Commission, that's in charge of reviewing the standards to make sure bars are in compliance even before the coronavirus. They still have the same enforcement mechanism and the same is true for a lot of different types of businesses that have a regulatory agency that oversees their operations.

RELATED: Federal judge says all Texas voters can apply to vote by mail during pandemic

GOUDEAU: I want to talk with you about voting. We just got some breaking news ... a federal judge in San Antonio ruled that the option to vote by mail should be expanded in Texas based on an undue burden of people under the age of 65. We've got this other state case that the Texas Supreme Court is going to weigh in ... I know it's all going to be worked out in the courts, but there are a lot of people – on both sides of the aisle – calling for the option to vote by mail to be expanded for the July runoff due to the pandemic. But where do you stand?

ABBOTT: First, I feel like I'm watching a tennis match with the ball going back and forth across the net. From one court to the other and one decision to the other. I think you may know, the State-based case is in the Texas Supreme Court right now, and apparently, as you pointed out and I did not know, there is this federal-based ruling. I think both of them are going to wind up in the U.S. Supreme Court pretty quickly. Here is the important deal: we want people to be able to vote based upon our current laws. We want them to be able to vote safely. And we want to do so in a way that reduces any potential fraud. We sought to achieve that, if you would, in the elections that are taking place this July, which are the runoff elections, by extending the time period for early voting to make sure everyone is going to have plenty of time to be able to go vote.

Abbott's live interview with KVUE comes one day after he outlined plans and guidance to reopen bars, child care facilities, bingo halls and more. During the May 18 press conference, Gov. Abbott announced Texas is prepared to enter phase two for reopening the state.

A full list of theses businesses that are able to open, and the guidelines for them, can be found on the governor's website.

Reopening Texas: Here's what is set to open next in Texas

City of Austin has no timeline for reopening pools, can't hire lifeguards

As Texas businesses reopen, all customers should follow these rules