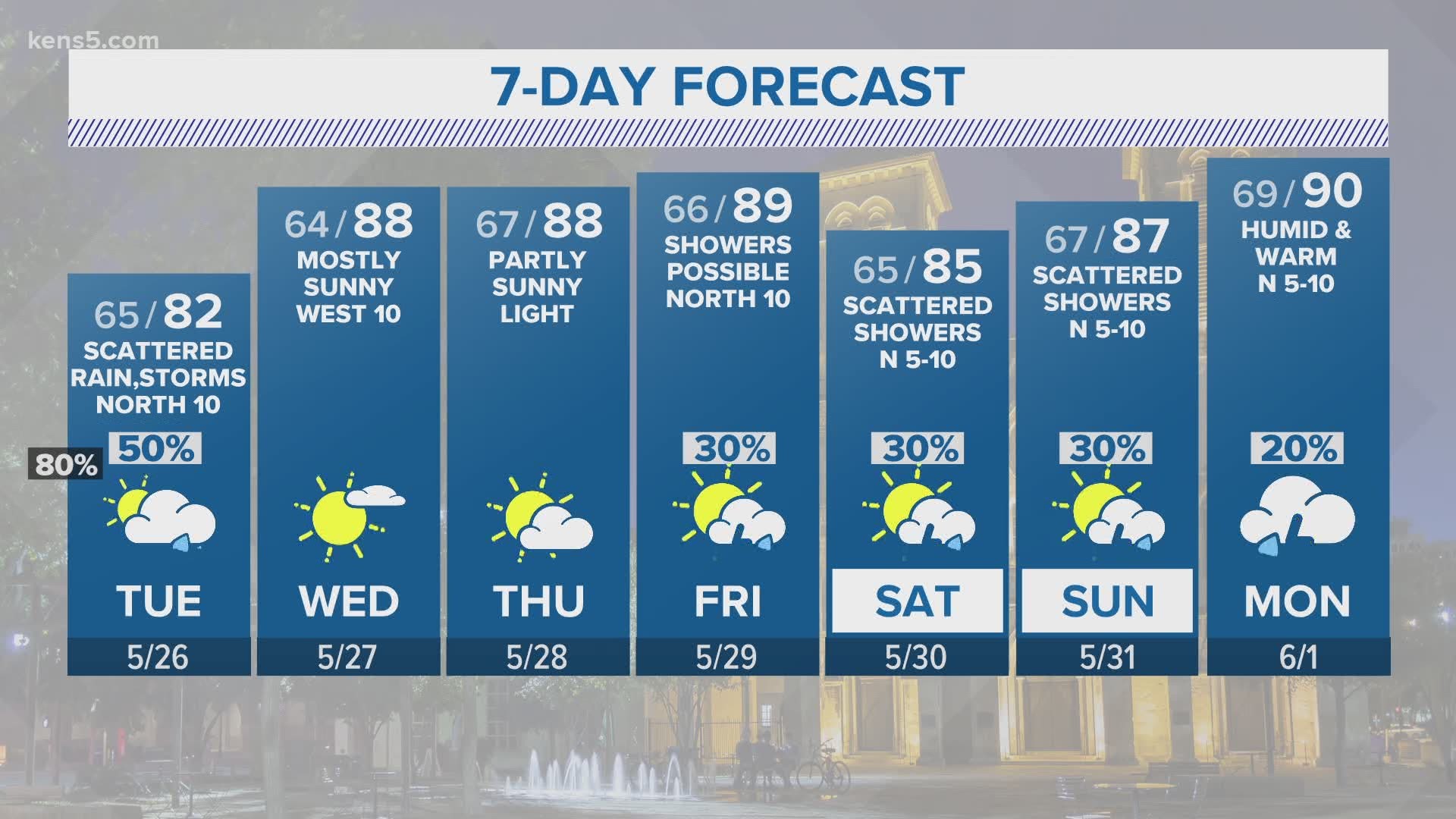 Much of south Texas, including San Antonio, remained under a Severe Thunderstorm Watch until 4 a.m. Tuesday.

An Areal Flood Advisory was issued for Bexar and Medina Counties earlier Monday evening; that extended until 12:30 a.m. Tuesday. With just a few days left in the month of May, San Antonio has seen 4.36" of rain in the month, about 1.25" above the average monthly rainfall.

The National Weather Service reported flash flooding in the Olmos Park area of San Antonio, as of 10:30 p.m. Monday evening. If you come across a flooded roadway, do not try to drive across the area. Remember - turn around, don't drown!

Several road closures have been reported throughout Bexar County due to high water and flooded roadways. As of 6 a.m. Tuesday, those include:

CLICK HERE TO VIEW A MAP OF ROAD CLOSURES

As of 1:00  a.m.Tuesday, CPS Energy is reporting 62 active outages affecting 837 customers in the San Antonio area. That number peaked Monday night at just over 2,200 customers without power. By 6 a.m. Tuesday, less than a dozen customers were without power.

CLICK HERE TO VIEW A MAP OF POWER OUTAGES

NWS reported quarter- to golf-ball-sized hail in Uvalde and near Floresville Monday night. Lots of lightning was spotted with these storms. Check out photos sent to us of lightning over parts of Bexar County:

This is a developing weather event. Refresh the page for the latest updates.

The current weather pattern remains a highly active one for at least a few days. Expect more rain to fall through Wednesday; more severe weather is also possible, including flash floods.

When severe weather threatens the area, it is important to know what risks a storm can bring and what you should do to stay safe.

One of the most important things to know is where you are located on a map, so when a watch or warning is put into place, you can identify if you are at risk. When the National Weather Service puts out warnings, they are county-based and sometimes include cities as well. It is important to know where you live in the county and that you can identify it on a map.

Hail that is one inch large is also considered to be about the size of a quarter.

Another ingredient that would lead to a storm becoming severe is if winds are 58 mph or greater.

Winds at this strength could cause damage to roofs and could even cause trees to be knocked down.

Finally, if a tornado is present inside a thunderstorm it would qualify the storm as becoming severe.

In this instance, a tornado warning would be issued.

A tornado watch can be issued for an area if strong storms are expected, and if the storms bring the risk for tornadoes, but not all storms include the threat for tornadoes. The ingredients in the atmosphere for a tornado to form are not always there when storms are present.

If the area you are in is ever under a tornado warning, it is important to know where you should go inside your home.

Head to the lowest, interior room of your home. The basement would be best, but if you don't have one, head to the first floor of the home and get away from exterior walls, or walls that lead to the outside of the home.

It is also important to stay away from glass. The more walls you can put between you and the outside, the better.

While lightning can be frequent in storms and very dangerous, it does not lead to a storm being qualified as severe.

Storms can also lead to flooding. Flooding may not cause a storm to be labeled as being severe, but it is the deadliest kind of weather.

South Texas is known to have major flood events every few years, so it is important to use caution and to always stay out of floodwaters. Remember, turn around, don't drown.

Entering flood water is very dangerous as you can be swept off of your feet and you don't know what could be in the water that could hurt you.

The best thing you can do to be ready for severe weather is know what you will do in the event it strikes where you live.

Make sure your family has a severe weather action plan.

Have a place everyone goes inside your home and keep supplies there, such as food, medication, batteries, and flashlights.

Don't forget you can download the KENS 5 app for the latest news and weather information each day while you are on the go.