Storms continue to push south of the KVUE area. 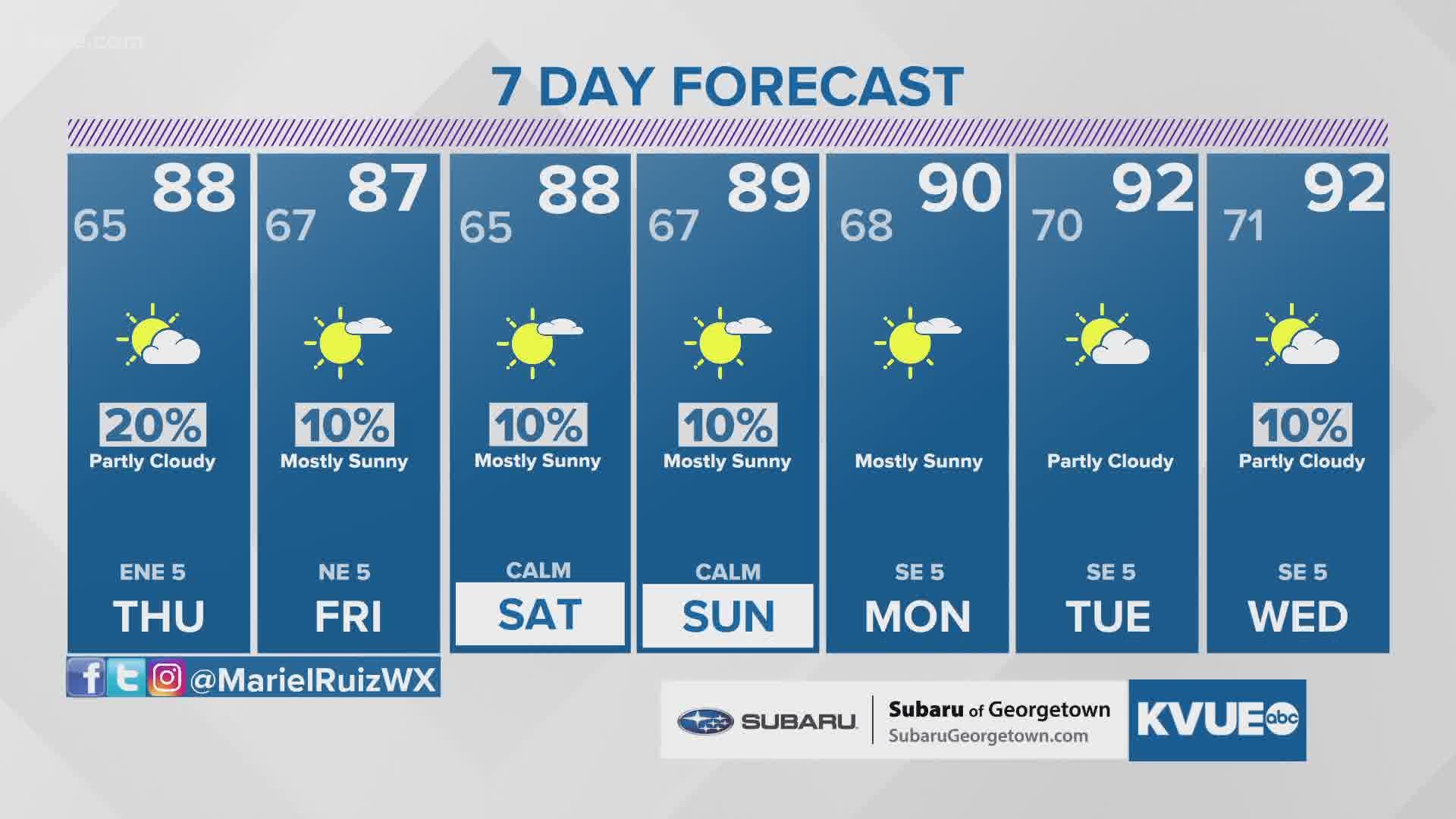 AUSTIN, Texas — Editor's note: This weather blog is no longer updating. For the latest updates on severe weather possibilities in Central Texas on May 28, read KVUE's weather blog here.

An active stretch of weather is set to continue pushing south across Central Texas. The latest update from the Storm Prediction Center includes south of the KVUE area in the "enhanced" – level three of five – risk for severe weather on Wednesday.

The main threats with any severe storms will be large hail and strong winds, but an isolated tornado cannot be completely ruled out. The threat lowers overnight.

Be sure to download KVUE's app for constant updates on the storm: kvue.com/app.

Keep up with the live updates here:

11:39 p.m. - Severe Thunderstorm Warning for Williamson County until 12:45. The storm is moving southeast at 35 mph with quarter-sized hail and gusty winds.

8:15 p.m. – Storms have intensified south of Austin. Severe Thunderstorm Warnings have been issued for parts of Caldwell, Travis, Bastrop and Hays counties until 9 p.m. 60 mph wind gusts and quarter-sized hail are possible as storms move southeast around 30 mph.

7:47 p.m. – Gillespie and Kerr counties remain under a severe thunderstorm warning until at least 8:15 p.m.

7:13 p.m. – Severe Thunderstorm Warning through Williamson and Travis County has been dropped.

6:46 p.m. – A Severe Thunderstorm Warning has been issued for parts of Williamson, Hays, Travis, Blanco, Llano and Burnet counties until 7:45 p.m.

6:34 p.m. – The Severe Thunderstorm Warning continues for Burnet County until 7 p.m. The line of storms is moving southeast at 35 mph. Threats are golfball-sized hail and 60 mph wind gusts.

5:52 p.m. – A Severe Thunderstorm Warning for parts of Llano and Gillespie counties is issued until 6:30 p.m. This warning includes the towns of Llano, Fredericksburg and Harper. Quarter-sized hail and 60 mph wind gusts are possible. It's moving southeast at 35 mph.

5:30 p.m. – A Severe Thunderstorm Watch has now been expanded to include the entire KVUE viewing area until midnight.

5:15 p.m. – A Severe Thunderstorm Warning was issued for a storm over Lake Buchanan until 6 p.m. There is quarter-sized hail likely and the storm is moving east at 15 mph.

4:15 p.m. – Showers and thunderstorms have developed in a line from Burnet, Travis, Williamson, Bastrop and Lee Counties. A stronger round of thunderstorms is to our northwest and moving southeast.

2:45 p.m. – A Severe Thunderstorm Warning continues for Milam County until 3:30 p.m. 65 mph wind gusts and half-dollar-sized hail is possible. This storm is moving south at 25 mph.

2:00 p.m. – A Severe Thunderstorm Watch has been issued until 9 p.m. for a portion of the viewing area. Travis, Williamson, Burnet, Blanco, Llano, Mason, Gillespie, Bastrop, Lee, Milam and Fayette counties are included.

1:30 p.m. – A Severe Thunderstorm Watch has been issued until 9 p.m. for a portion of the KVUE viewing area. Travis, Williamson, Harris and Fort Bend counties are included in the watch.

After a refreshing start Wednesday morning, temperatures and humidity levels will build through the early afternoon hours as highs reach the mid and upper 80s.

Central Texas should remain dry through noon, but by 2 p.m. or 3 p.m., the window for storms will open.

Activity may initially begin north of the Austin area, and then spread southeast through later afternoon hours.

By about 5 p.m., the activity is likely to become more widespread, especially for the northern tier of the area.

Not necessarily all of Central Texas will experience a storm on Wednesday, but where the storms do develop, they could be severe.

Storms will continue moving to the southeast through the early evening hours, and the potential for large hail, gusty winds and a couple of tornadoes will continue.

Eventually, storms are expected to move south of the area through the later evening hours.

Showers and downpours may continue through the overnight but, by 10 p.m., the severe weather threat should be coming to an end based on current forecast trends.

The KVUE Storm Team will continue to monitor the forecast closely and will fine tune timing and details as confidence increases.

For now, the extended forecast can be found below: