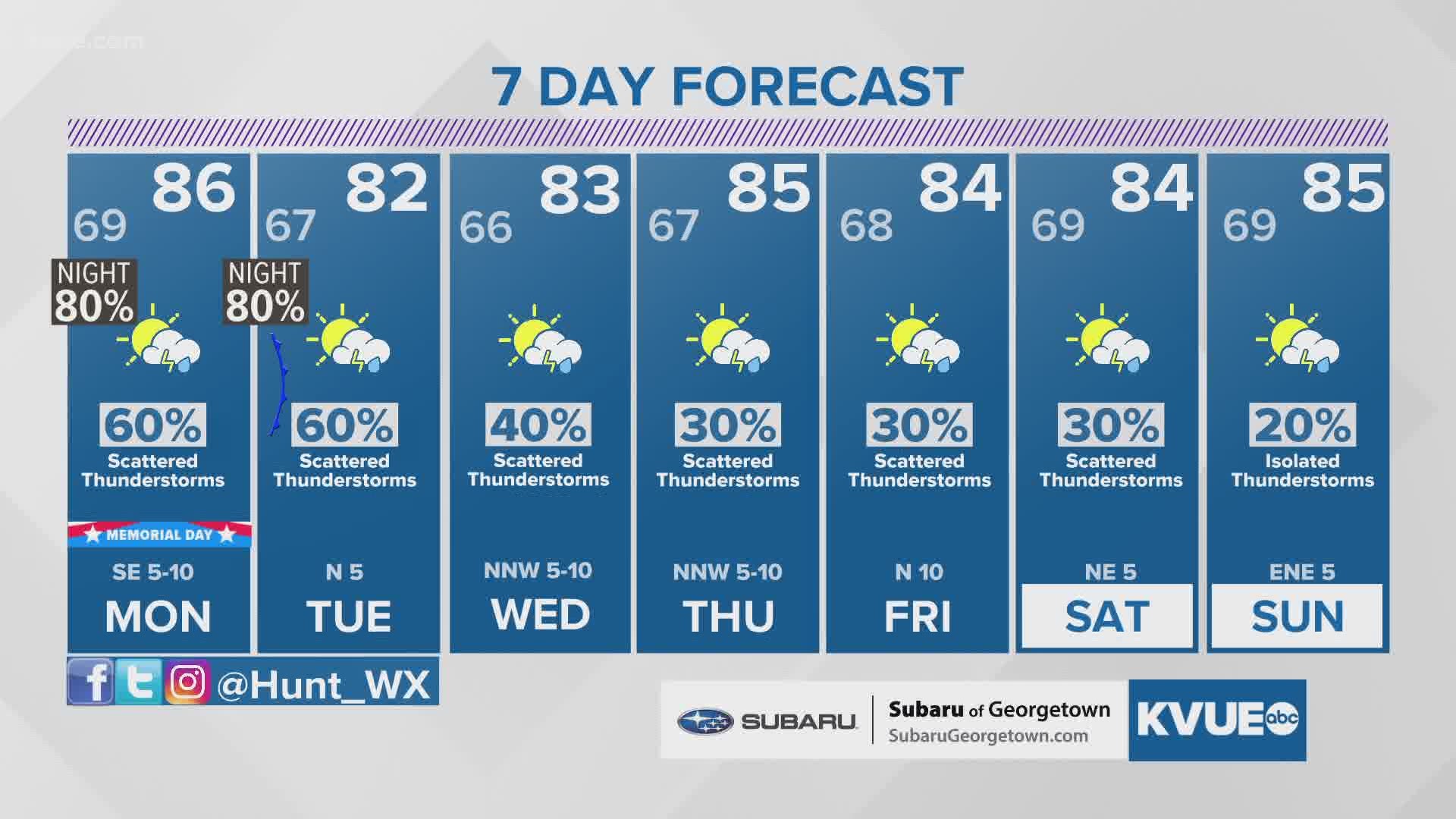 AUSTIN, Texas — Editor's note: This blog is no longer active. For the latest updates, check out our new story here, and download the KVUE app to get weather alerts straight to your phone.

1:30 a.m. - The entire KVUE viewing area is now out of the severe thunderstorm watch.

1:30 a.m. - All warnings have expired for the KVUE viewing area.

12:25 a.m. – The tornado warning for parts of the KVUE viewing area has expired. The only warning as of 12:25 a.m. is a flash flood warning for Blanco, Hays, Comal and Travis counties until 1:30 a.m. People living in Buda, Kyle, San Marcos, Shady Hollow and Wimberley should remain aware of flooding risks.

Moderate to light rainfall is expected.

10:15 p.m. – A severe thunderstorm warning has been issued for eastern Hays, Caldwell and southern Bastrop counties until 11 p.m. The storm continues to move east at 25 mph, with gusty winds as the main threat.

8:55 p.m. – A new severe thunderstorm warning has been issued for areas of Central Texas, including southern Travis County, until 10 p.m.

8:40 p.m. – A severe thunderstorm warning that was in place until 9 p.m. for the Austin area has now expired. A flash flood warning remains in place for Travis County until 10:45 p.m. A further line of storms is headed east over the Hill Country toward the Austin metro.

8 p.m. – A severe thunderstorm warning has been issued until 9 p.m. for the Austin area, including Pflugerville and Wells Branch.

7:15 p.m. - A severe thunderstorm warning for the Austin area has been extended until 8 p.m. and now includes Williamson County. The storm is moving north at 25 mph. Quarter size hail is the main threat.

An active stretch of weather is ahead for Central Texas, bringing multiple opportunities for storms through Memorial Day weekend and the upcoming week.

Sunday will not be an all-day washout for those with outdoor plans, but scattered showers and storms will be possible through the daytime hours with a rain chance of about 50%.

Clouds and rain will likely keep afternoon temperatures in the 80s to low 90s at the warmest, but oppressive humidity will mean the air will still feel quite muggy and uncomfortable.

After the scattered activity during the day, a more organized storm threat will likely develop for Sunday evening and night.

This evening round of storms will be the primary concern for severe weather. The Storm Prediction Center has outlined all of the KVUE area in the "slight" – level 2 of 5 – risk for severe storms.

The main threats will be gusty winds and hail, especially as storms initially develop across the Hill Country. Heavy rainfall will also be a threat with storms as they continue to expand east through the overnight.

Timing remains fluid for this evening, but the latest computer guidance is suggesting that more widespread storms could be developing across the Hill Country as early as about 5 p.m. But the most organized coverage of storms will likely hold off until the evening.

Storm activity is then expected to spread eastward through the late evening and overnight hours.

For the Austin metro and the Interstate 35 corridor, it's likely after 7 p.m. or so when the most widespread activity will be knocking on the door. But again, activity could be scattered in nature so exact timing cannot be pinned down.

Rain and storms will likely remain widespread and expand eastward through the overnight hours and early morning hours of Memorial Day.

After the Sunday night storms, rain and storms remain likely through the afternoon on Memorial Day. Forecast trends could change over the coming days, but as of Sunday, a 60% chance of rain and storms is in the forecast.

This doesn't mean that it will be raining all day on Memorial Day, but scattered showers and storms will be possible through the afternoon. A strong storm or two cannot be ruled out.

Rain chances are also in the forecast for the next seven days. At times, rain could be heavy. Widespread two to four inches of rain isn't out of the question over the next week.