Tropical Storm Marco strengthened to a Category 1 hurricane late Sunday morning, then weakened back down to a Tropical Storm by 10 p.m. 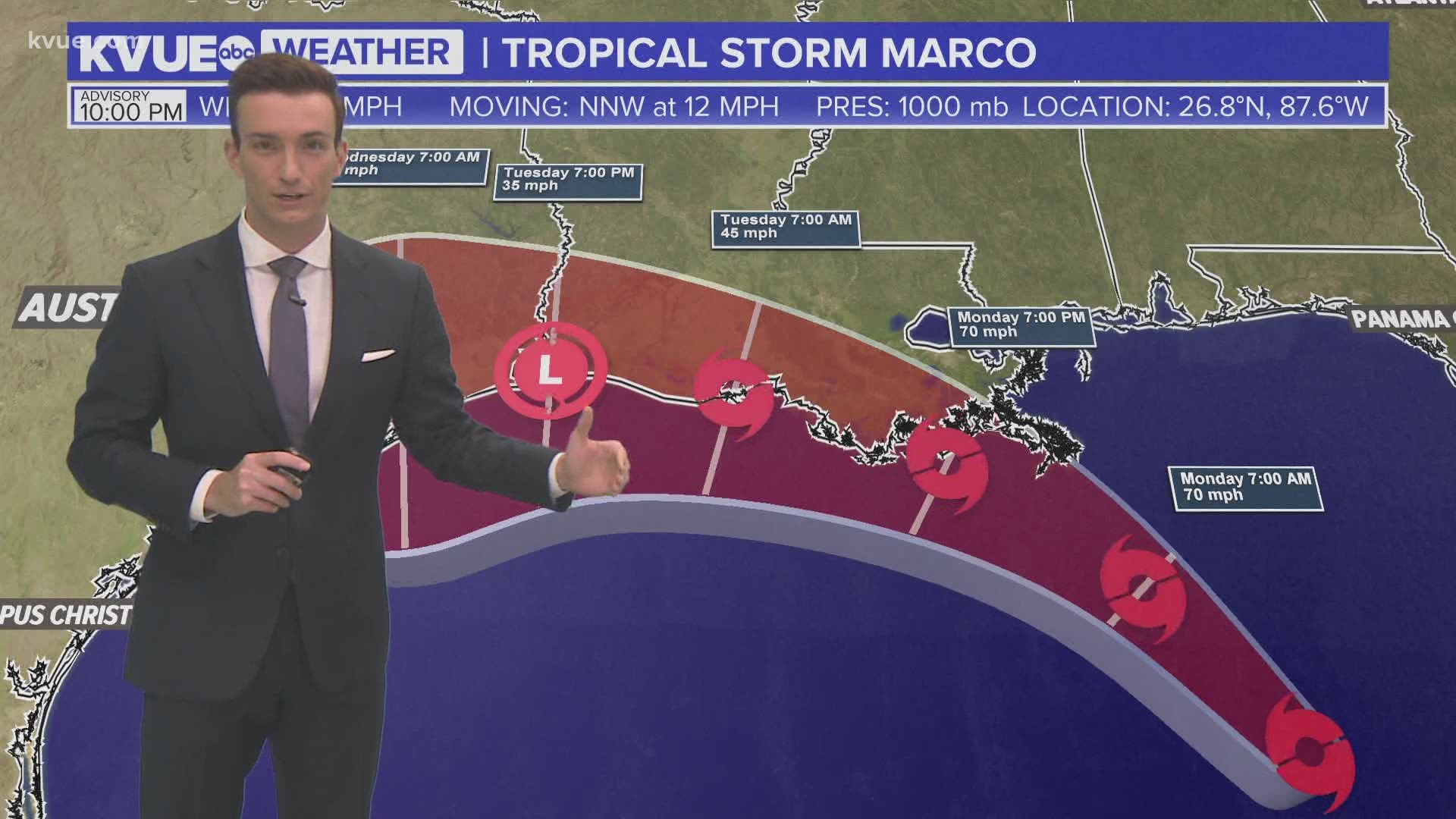 During the briefing, Abbott announced he has declared a State of Disaster for 23 Texas counties, including the 22 coastal surge counties as designated by the National Weather Service, as well as Bexar County for the purposes of staging and sheltering. He is also requesting that President Donald Trump issue a federal emergency declaration for those 23 counties.

On Monday, Gov. Abbott said more than 70 members of the Texas Army, Air National Guards, and Texas State Guard with the Texas Military Department (TMD) have been activated and are prepositioning throughout Texas.

"As Tropical Storms Marco and Laura approach Texas, the state is mobilizing the Texas National Guard to assist local, state, and federal officials in response to these storms," said Gov. Abbott. "As the situation develops, it is imperative that Texans who live on the Gulf Coast and in Southeast Texas pay close attention to weather alerts and heed warnings from local officials. Property and belongings can be restored, but lives cannot. I call on all Texans who may be in harm’s way to put their safety and their family’s lives above all else and adhere to the guidance and warnings from emergency management officials."

The Texas National Guard is headed to coastal counties in response to Tropical Storms Marco & Laura.

They have high-water vehicles and rescue helicopters to help Texans in need.

Be prepared. Be safe. https://t.co/XrRfWZb2QH

Multiple Texas Army National Guard ground transportation teams with high-profile vehicles are moving to support local and state agencies. As of Monday, UH-60 Blackhawks and UH-72 Lakota air crews have been alerted at Austin-Bergstrom International Airport and San Antonio to assist with any emergency search-and-rescue or emergency evacuations. The Texas State Guard service members are also ready to provide assistance with local shelter and logistical operations in the affected counties.

The DSHS has also identified two current COVID-19 facilities that can be converted into medical shelters, one in San Antonio and one north of the Houston area, to make sure that "we will be able to continue to provide for the needs of anybody who may have COVID challenges," Abbott said on Sunday.

Abbott has also been in contact with both the regional director and head of the Federal Emergency Management Agency (FEMA), both of whom have "committed to work collaboratively with Texas to make sure that we have everything that we need to respond to these oncoming hurricanes."

Governor Abbott said contractors and first responders are on call to focus on the potential of flooding near I-10, ahead of Hurricane Marco and Tropical Storm Laura. 🛣 💧 @KVUE

Abbott also addressed in the briefing the importance of heeding local weather warnings and taking precautions while also maintaining safety protocols to mitigate the spread of COVID-19.

"As we respond to these oncoming hurricanes, it is essential that everybody in every community continue to do everything that you can to maintain your distance from others, to remember the safety practices that you have adopted over the past few months and that is to wear a mask, to sanitize your hands, to use all the strategies that now have proven to be so successful in Texas," Abbott said.

At the end of the briefing, Abbott said he was on his way to speak with the county judges of all the counties under his State of Disaster declaration.

On Friday, the governor had requested that the Division of Emergency Management identify the following resource in support of the potential response to the storm: