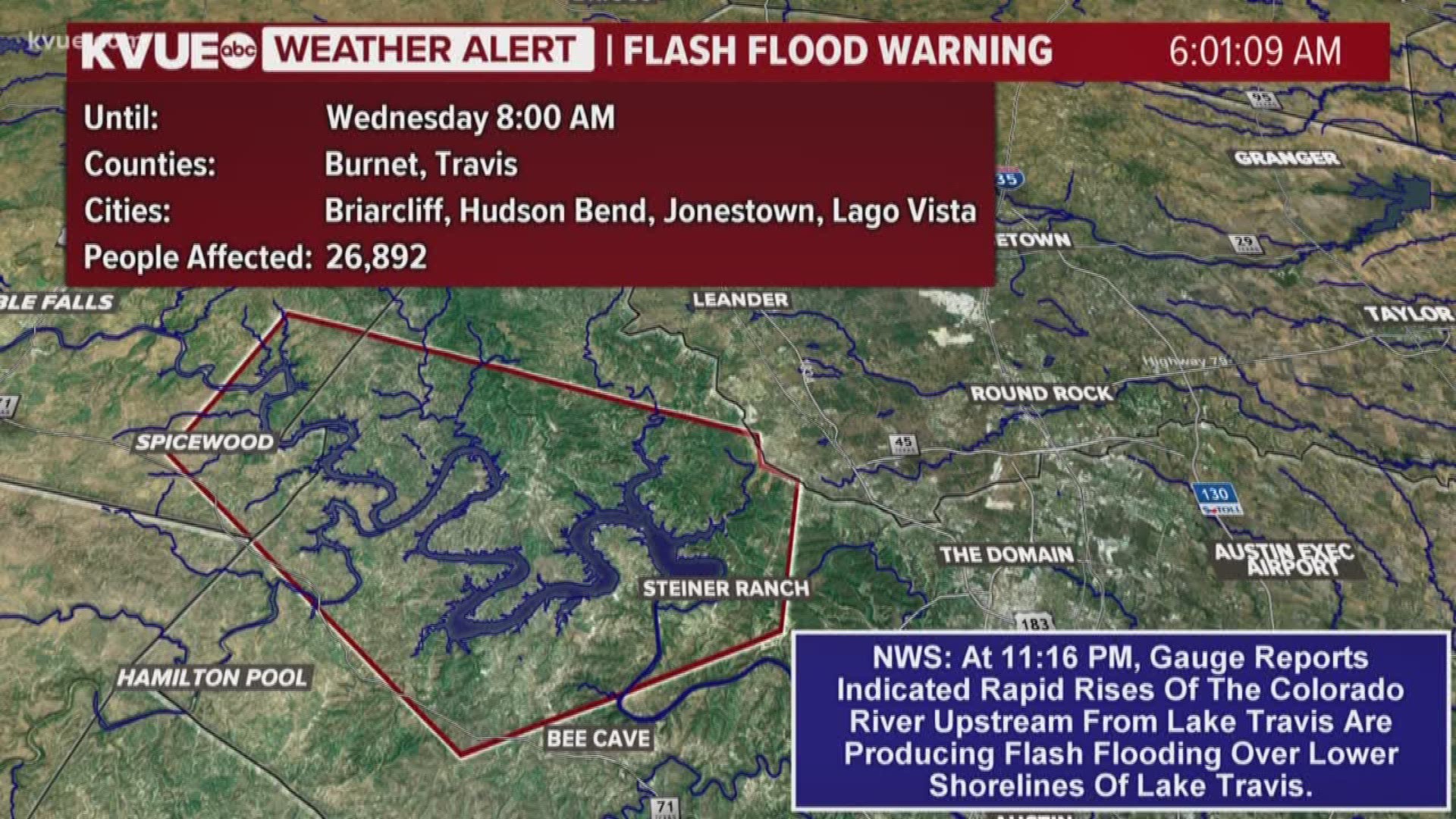 CENTRAL TEXAS — Note: This blog is no longer being updated as of Tuesday, Oct. 16. Stay up to date with the latest weather coverage, here.

Llano County officials remain on high alert a day after the Llano River reached near historic height and set on a series of evacuations for multiple cities in the Central Texas Hill Country. At least one person died in the flood event on Oct. 16, according to Llano authorities.

According to Llano County Judge Mary Cunningham, several low water crossings remain closed Wednesday morning, and people are asked to stay off of the roadways and inside if possible due to debris. The Llano River crested Tuesday at 39.9 feet, which is more than 10 feet above the flood stage and only about a foot and a half below the record height of 41.5 feet, which was set in 1935.

As of 10:15 a.m. Wednesday, the Llano River has dropped to 12.5 feet, according to Llano County Emergency Management Coordinator Ron Anderson. However, authorities fear the river level could rise again with more forecasted rain on the way.

As a result of the flooding of the Llano River, eyes are also on Lake Travis, which continues to rise to dangerous levels Wednesday.

Llano not in the clear yet after flooding, Lake Travis continues to swell

Llano County officials said that while the Llano River level is dropping, it's still not clear on how long it will last with more rain expected in the forecast.

"We need to make sure we're all keeping an eye out for floodwater," Cunningham said.

A flash flood watch is in effect for several counties in the Hill Country until Thursday evening.

"We could see another rise of the Llano River. Whether or not it will be of historic value -- we do not know yet," Anderson said.

Llano County authorities said a body was discovered at Flag Street and Sandstone Street Tuesday night after the Llano River flooded. Cunningham said it was the first confirmed fatality related to the flooding, and it's the only one they are aware of. While the victim's family has been notified, police are not releasing the person's name.

Currently, first responders are actively searching the area for people in need of help, and road and bridge crews are out on the roadways assessing the damage from the floods on the roads that remain closed.

Anderson said the 2900 bridge in Kingsland was washed out Tuesday, creating a traffic hazard. There was also reportedly a small portion of 1431 at the Colorado River Crossing that was "disabled" by the floodwaters, making it difficult for people to get from Marble Falls to Llano County.

Anderson said people with medical emergencies who need to get to either area should call 911 for assistance. Residents with non-emergency issues in areas impacted by the floods are asked to contact the Llano County Sheriff's Office for help. The number is 325-247-5767.

Homes that were evacuated before and during the height of the flooding are asked to wait before re-entering their homes because the structures have to be evaluated, Anderson said.

Llano County officials will provide another update on the Hill Country at 4 p.m.

SHELTERS AND RESOURCES FOR EVACUEES

If you live in Llano County, two shelters are open for people. The Llano County Office of Emergency Management said the John Kuykendall Arena & Events Center at 2200 W Ranch Road 152 and Lutie Watkins Memorial United Methodist Church at 800 Wright St.are both taking in evacuees. The shelters are being supported by the Red Cross and Llano County. Officials could not confirm, just after 10 a.m. Wednesday, the exact number of people displaced by the flooding.

Llano County Office of Emergency Management said shelters are in place at the First Baptist Church and Inmans Kitchen in Llano. With the heavy flooding from the Llano River, Kingsland and Llano are dealing with ongoing water shortages. County officials said they would be passing out bottled water, courtesy of H-E-B, and ice at the Llano Junior High School and First Baptist Church in Kingsland on 1431 Kingsland Way.

Llano High School and the Kingsland Community Center are both taking in evacuees.

If you need to be evacuated, officials recommend contacting the Llano Police Department.

Here are the updated road closures for Wednesday, Oct. 17.

The following roads are closed in Marble Falls:

The following roads are closed in Kingsland:

The following roads are closed near Llano

10:30 p.m.: All seven floodgates at the Longhorn Dam over Lady Bird Lake are open.

5:40 p.m.: The Kimble County Sheriff reports that they believe the body that was found in the Colorado River belonged to a person who was previously reported missing in the Junction floods a little more than a week ago.

5:30 p.m.: LCRA projects another one or two-foot rise of Lake Marble Falls between hours of 9 p.m. and 11 p.m. this evening. Residents with flooded areas are asked to be vigilant and take necessary precautions.

4:05 p.m.: During a press conference, Llano County officials said there have been no reports of fatalities or injuries due to flooding. Officials said roughly 105 people have been rescued along Lake LBJ due to flooding. If you have a non-emergency in Llano County, officials encourage you to call the sheriff's office at 325-247-5767. Llano County officials are also asking for monetary donations to help the county get past this "terrible situation." Donations can be made to the Llano Chamber of Commerce.

3:09 p.m.: The Llano River is forecasted to rise later Tuesday evening to 40.1 feet. This would be higher than Tuesday morning's crest at 39.9 feet and place it within 1.4 feet from the record set back in 1935.

2:04 p.m.: Burnet County officials confirmed one body was found in the Colorado River. No immediate details about the person were released though, pending notification of next of kin.

1:48 p.m.: Granite Shoals police sent an urgent warning to residents along the lakefront to evacuate their homes immediately. They said all area resources were stretched thin and asked people to get away from the low lying area. Residents are asked to stay off the roads and not call 911 unless they are trapped or it's an emergency.

1:27 p.m. The City of Marble Falls said there's no access to Pecan Valley and the City of Meadowlakes. If you didn't leave the Meadowlakes in time, the city is accepting evacuees at the city hall.

1:24 p.m. The Travis County Sheriff's Office announced they would be going door to door at Graveyard Point to alert residents about rising waters on Lake Travis.

1:14 p.m.: KVUE reported that Lake Travis was 95 percent full and had risen 10 feet since midnight.

Texas Game Warden Search and Rescue teams involved in air and water rescues along Llano River. Calls for service are coming in one after the other. Heed local warnings as flooding will continue in the area for the foreseeable future. #txwx @tpwdnews pic.twitter.com/g3p0wdgRA0

11:44 a.m.: The City of Marble Falls reported to the National Weather Service that the wastewater plant is stressed due to the flooding event. All residents are asked to minimize their use of any activity that uses wastewater -- meaning no laundry, no washing dishes, minimal toilet flushing and minimal showering.

11:01 a.m.: The Williamson County Sheriff's Office said they were evacuating the Shady River RV park on the San Gabriel River, located in the 7400 block of Highway 29 just east of Georgetown.

10:57 a.m.: Flood operations at Mansfield and Tom Miller dams are set to begin at noon Tuesday. This means swift and high waters will be moving through Lake Austin and Lady Bird Lake.

10:05 a.m.: Granite Shoals officials said Impala and Web Isle residents should consider moving to higher ground due to the closing of the causeway, a raised road or track across low or wet ground. North and south Shorewood lakefront side residents are asked to higher ground immediately due to Lake LBJ rising quickly.

10 a.m.: All lakefront residents in Granite shoals are being evacuated. Residents are asked to head to the Marble Falls Middle School for safety. *NOTE: The middle school shelter is now closed. The City of Marble Falls Emergency Alert Center is open instead for those seeking shelter.*

9:54 a.m.: Gov. Greg Abbott said the Texas State Operations Center has increased its readiness to handle the severe weather and flooding happening in Central Texas. He said state resources will be available to assist local officials in their response efforts.

9:44 a.m.: National Weather Service extends the flood warning for the South Fork San Gabriel River in Georgetown. At 8:16 a.m., the river measured at 13.6 feet and the flood stage is nine feet.

9:36 a.m.: TxDOT Austin confirms that the FM 2900 bridge in Kingsland was washed away by flood waters.

8:30 a.m.: KVUE Chief Meteorologist reports that the Llano River has dropped to 39.53 feet after cresting at 39.9 feet sometime after 6 a.m.

8:10 a.m.: Anyone living in 1/4 mile of the Llano River should evacuate immediately, according to the Llano County Office of Emergency Management. The bridge at FM 2900 will be topped soon by waters, officials said.,

7:42 a.m.: Lake Travis has risen four inches since midnight and could rise 10 more feet in the next 24 hours as flood water from the hill country moves down the Colorado River, according to the Travis County Sheriff's Office.

7:30 a.m.: The Central Texas Electric Coop in reports that there have been 500 outages between Mason and Llano.

7:18 a.m.: The desk manager at the Llanorado Lodge said guests and the RV space are being evacuated. The manager said there's an issue with wood and debris in the river.