Showers moved out of Central Texas on Friday night ahead of a warm and sunny weekend. 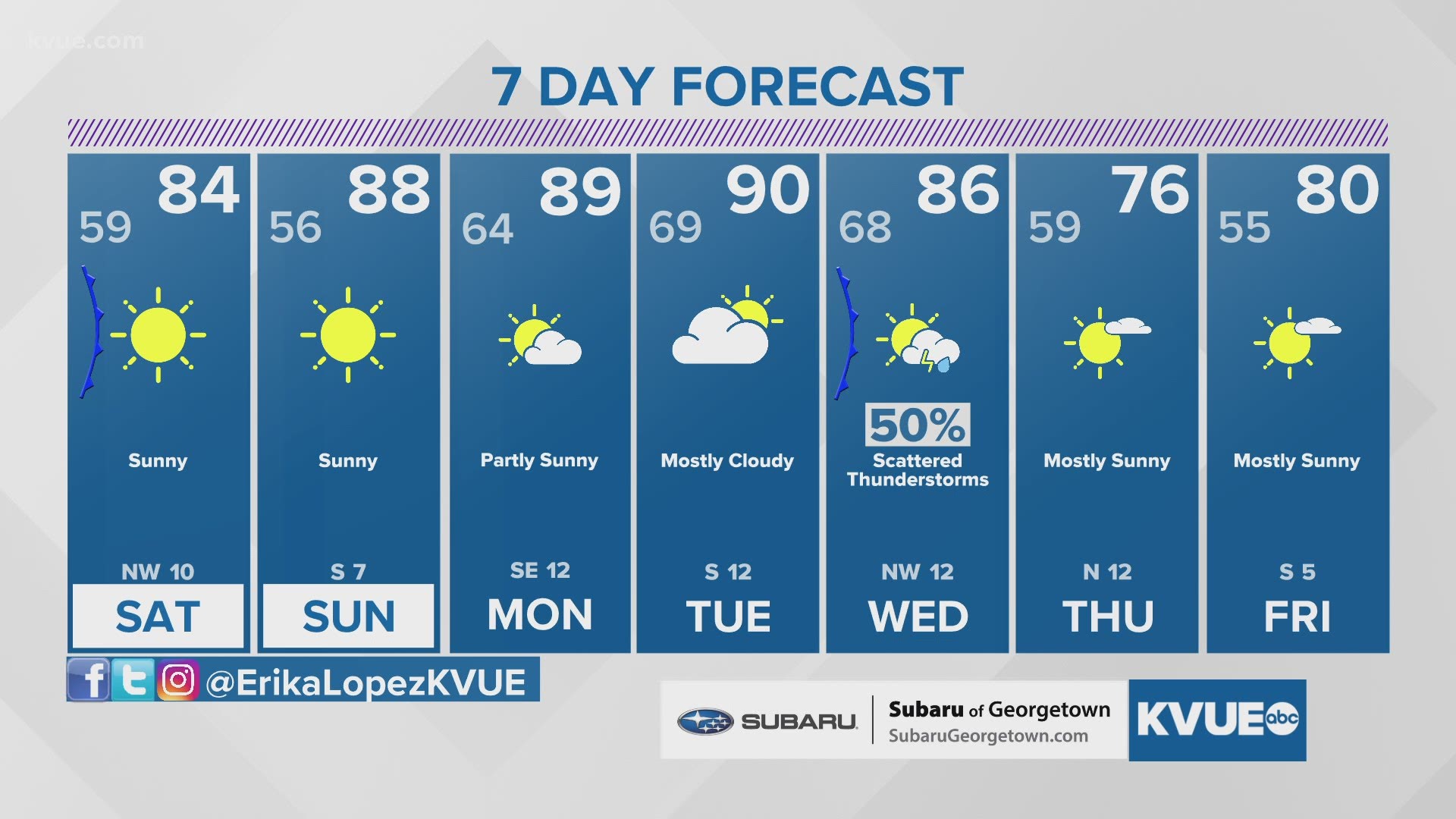 After a wet and stormy Friday afternoon, things have trended a bit quieter for the evening. The Severe Thunderstorm Watch from earlier has now been canceled.

Please be mindful on the roads on Friday evening. Radar estimates suggest that upwards of 3 inches of rain has fallen over parts of Bastrop and Caldwell counties. This could result in some water-covered roadways.

Please be careful on the roads, and never drive through standing water. Check atxfloods.com for the status of low-water crossings.

Follow along with this blog for live updates as the KVUE weather team tracks storms in Central Texas.

9:57 p.m. - The last showers have pushed east out of the area, and the Severe Thunderstorm Watch is canceled.

Severe Thunderstorm Watch issued south of the KVUE area, but does include Fayette County until 11 PM. https://t.co/8kmwW8uXsu

4:30 p.m. - The Severe Thunderstorm Watch has been canceled for Central Texas, but more storms are possible.

3:50 p.m. - The heaviest of the rain is clearing out of the KVUE viewing area but Flood Advisories remain in effect for parts of Caldwell, Bastrop, Travis and Lee counties. Over 3 inches of rain have fallen in many spots and an additional 1 inch to 2 inches are possible.

3:45 p.m. - Austin ISD has canceled after-school activities for Friday due to the inclement weather. This includes athletics, after-school care and any other events.

3:15 p.m. - The heaviest of the rain continues to be east of Austin. Downtown Bastrop has seen over 4 inches of rain since midnight. Heavy rain remains the primary threat this evening, but we remain under a Severe Thunderstorm Watch until 8 p.m.

2:15 p.m. - Active warnings have expired, but flood advisories remain in some areas east of Austin.

2:15p - Strong storms continue to move north from San Marcos to Bastrop to Giddings. All warnings have expired but Flood Advisories are ongoing as some heavy rainfall producing a quick 1-3 inches is occurring. #txwx pic.twitter.com/MA2zF1VGva

1:48 p.m. - A Severe Thunderstorm Warning has been issued for Bastrop and Travis counties until 2:45 p.m. This covers eastern Travis County and western Bastrop County.

1:20 p.m. - A Severe Thunderstorm Warning has been issued for parts of Caldwell County and Guadalupe County until 2:15 p.m. 60 mph winds and hail up to penny size possible. The storm is moving north at 20 mph.

12:41 p.m. - A Severe Thunderstorm Watch has been issued for much of Central Texas until 8 p.m. Storms capable of large hail, damaging winds, and an isolated tornado are possible. Travis, Williamson, Burnet, Blanco, Hays, Bastrop, Giddings and La Grange counties are included in the watch.

Looking ahead: Keeping an eye on evening storm potential

As round 1 of storms comes to an end, we're not completely out of the woods just yet. A dry line from west Texas will move into Central Texas this evening, and this could cause a few more storms to fire up that could be strong to severe between about 6 p.m. and 9 p.m. this evening.

However, uncertainty remains with the potential for storms. It's possible that the atmosphere will be too worked over from storms earlier in the day to produce another round for this evening.

However, it's also possible that a few additional storms fire up along the dry line in the Hill Country and quickly spread eastward, and these storms could also be strong with hail, gusty winds, and an isolated tornado.

So to be on the safe side, make sure you have a way to receive warnings between now and about 9 p.m. this evening. Afterwards the severe threat will wind down, and a cold front will move through by Saturday morning bringing us much nicer weather for the weekend.

After the threat of severe weather, a sunny and warm weekend is ahead.