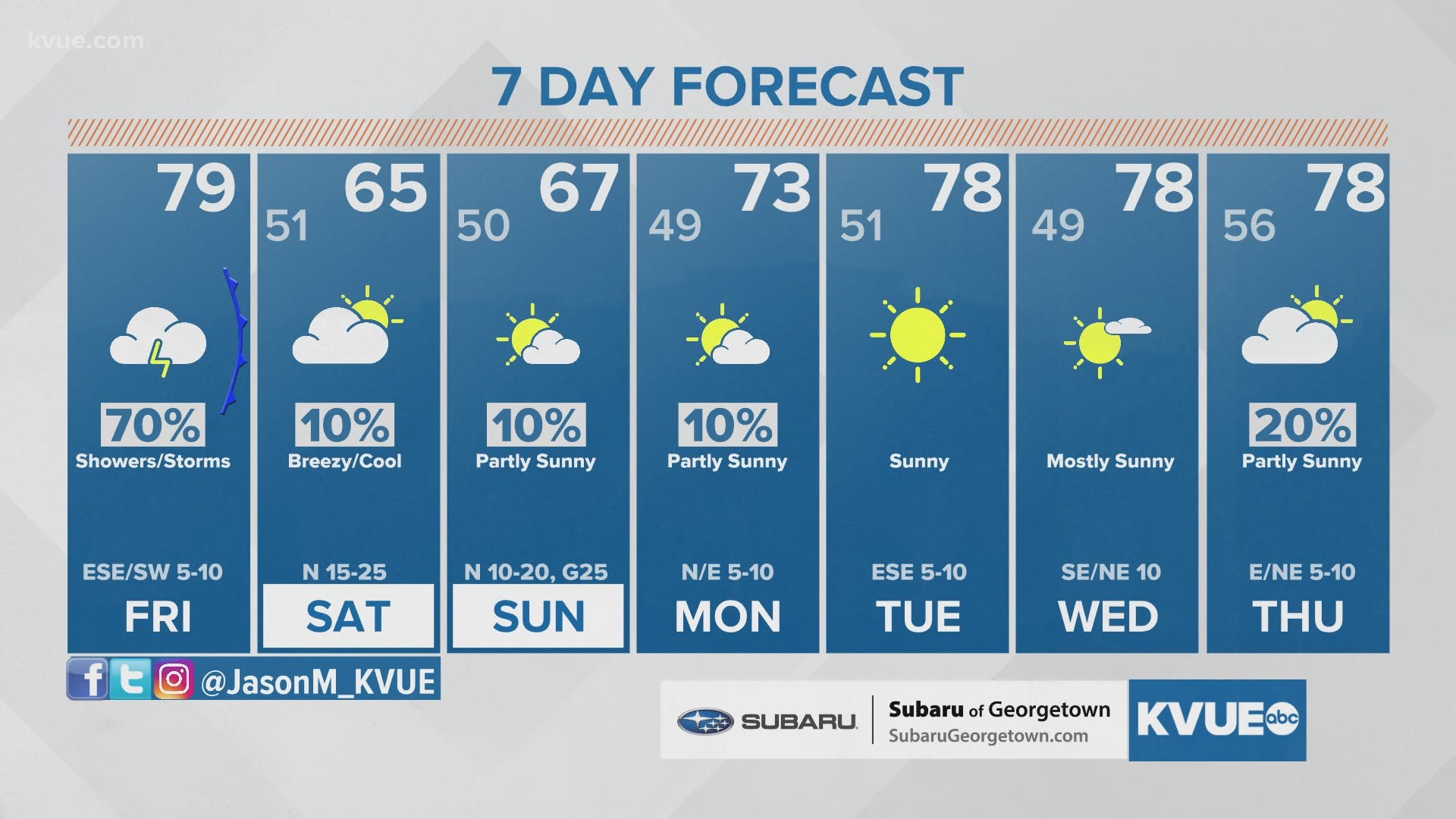 AUSTIN, Texas — Another busy weather day across Central Texas Thursday with severe storms sweeping through our northern counties. There were many reports of hail as large as baseballs in parts of Mason and Burnet counties. Golf ball size hail was reported in Williamson County.

We aren't completely done with the severe weather threat this week. Friday brings a 70% chance of scattered showers and storms with a "marginal risk" for severe weather, which is a level 1 out of 5 threat. Large hail and damaging winds will be our primary concern once again.

Here is a timeline of updates as the storm moves through the Central Texas area:

5:40 p.m. – A Severe Thunderstorm Warning has been issued for Lee, Fayette and Bastrop counties until 6:30 p.m.

4:45 p.m. – Golf ball-sized hail has been reported as the storm moves through the Leander and Round Rock area.

4:40 p.m. – A severe thunderstorm warning has been issued for Bastrop, Lee, Travis and Williamson counties until 5:30 p.m.

4:10 p.m. – A severe thunderstorm warning has been issued for southern Williamson and northeastern Travis counties until 4:45 p.m., with hail up to tennis ball size and 60 mph winds possible.

3:21 p.m. – A Severe Thunderstorm Warning has been issued for Georgetown and Burnet until 4:15 p.m.

Severe Thunderstorm Warning issued for parts of Burnet and Williamson counties until 4:15 PM. Hail up to half dollar size and winds up to 60 mph possible. Storm is moving east at 50 mph. #kvue #atxwx pic.twitter.com/0QRfGCpbqQ

2:09 p.m. – There is a second storm that has formed, creating a secondary Severe Thunderstorm Warning right over Burnet in Burnet County. It's moving northeast.

1:53 p.m. – A new Severe Thunderstorm Warning has been issued until 2:45 p.m. to include Williamson County. Bertram, Liberty Hill, Georgetown, Serenada and the Jarrell area are included in the warning. The main threats are wind and quarter-sized hail.

1:46 p.m. – This storm may be headed to the Georgetown and Leander areas if the storm doesn't fall apart.

1:35 p.m. – Marble-sized hail has been reported in Llano County:

All things considered, not too bad with marble sized hail from the left split 9 m SSE of Llano on CR312. Right split undoubtedly worse to my south. I need dry clothes. #txwx #ewxspotter @NWSSanAntonio pic.twitter.com/6ExXlxNoeY

1:29 p.m. – Gillespie County is no longer included in the Severe Thunderstorm Watch.

1:23 p.m. – Dime- to quarter-sized hail is estimated in the areas of the Severe Thunderstorm Warning.

1:10 p.m. – A Severe Thunderstorm Warning has now been issued for parts for Burnet, Llano, Blanco, and Travis counties until 2 p.m.

1 p.m.  – The Llano County storm is splitting, according to the National Weather Service. The left-moving storm will head toward or just east of the city of Llano while the right-mover will continue East and could reach the Austin Metro area in a couple of hours. Large hail is possible with both.

12:49 p.m. – The immediate town of Llano is not included in the Thunderstorm Warning, Hunter Williams reports.

12:46 p.m. – KVUE's Hunter Williams reports that the storm has moved out of Mason County. The Thunderstorm Warning does not include Mason County at this time.

12:19 p.m. – Severe Thunderstorm Warning extended to include northern Gillespie and parts of Llano County until 1:15 p.m. Storm is capable of golf ball size hail and winds up to 60 mph. Moving east at 30 mph.

Severe Thunderstorm Warning extended to include northern Gillespie and parts of Llano County until 1:15 PM. Storm is capable of golf ball size hail and winds up to 60 mph. Moving east at 30 mph. #kvue #atxwx pic.twitter.com/QJRbKC8JXM

Here's the updated timeline for this storm. Heading towards Hilda now! #atxwx pic.twitter.com/RgKVoHguF4

Another round of storms is expected on Friday.

A cold front will move through Central Texas by Friday night. Ahead of this front, we're expecting one last organized storm threat for Friday, especially during the morning hours.

Once again, a few of these storms could be strong. So, to be safe, make sure you have a way to receive warnings through the rest of the workweek.

Sweater weather is making a comeback this weekend! That is, at least for the mornings. Behind Friday night's cold front is a much cooler weekend forecast with highs only in the 60s and lows in the 40s. We still have a 10% to 20% chance of an isolated shower or storm this weekend under mostly cloudy skies.

'Lights Out': Austin businesses to turn off lights overnight to save migrating birds