This will not be your typical meteor shower. 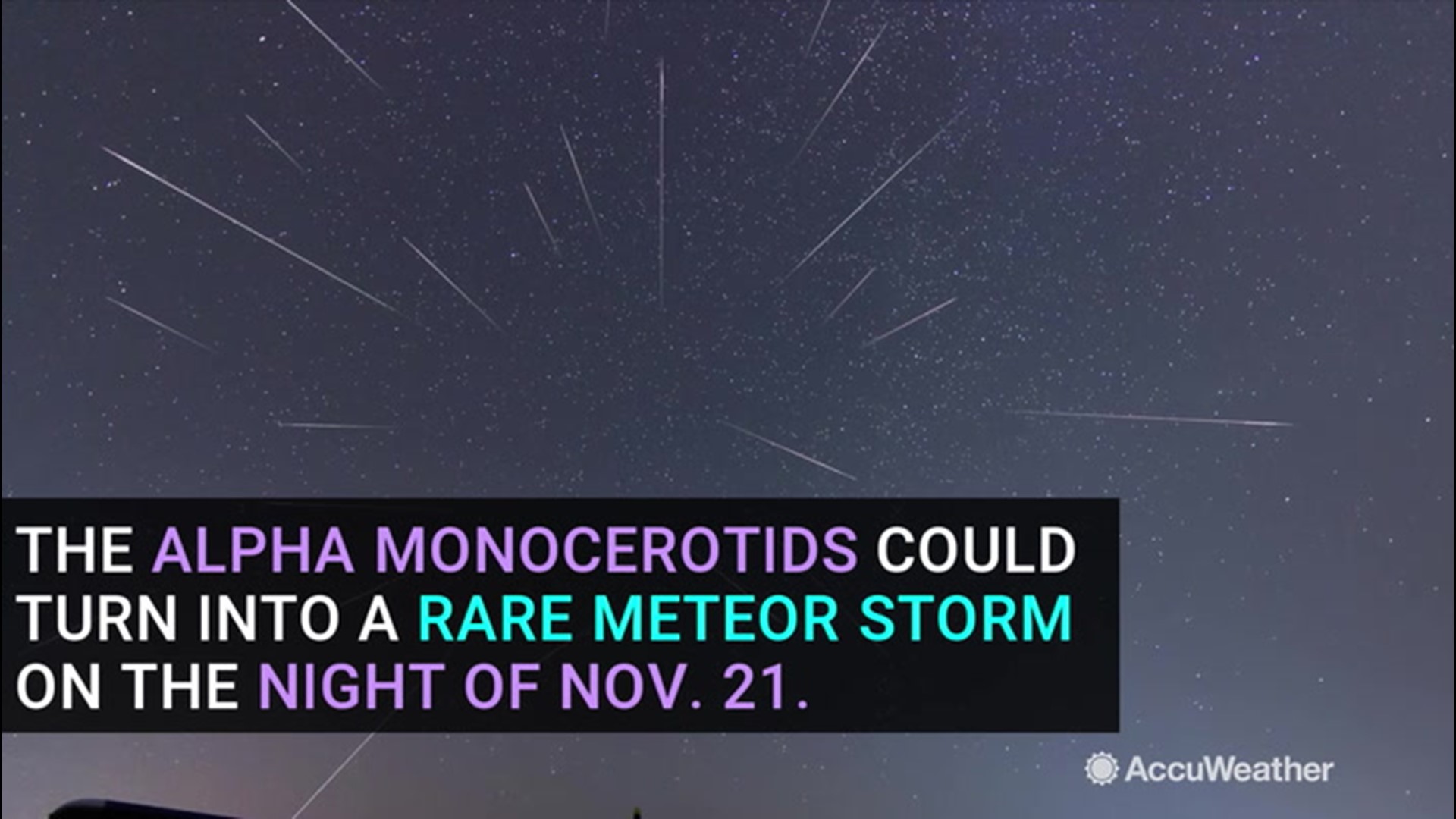 This is not your typical meteor shower. On Thursday night, stargazers may get to see several meteors per minute during a rare event known as a meteor storm.

There is a chance that the upcoming alpha Monocerotid meteor shower could turn into an all-out meteor storm on the night of Nov. 21, according to Esko Lyytinen and Peter Jenniskens, two meteor scientists who have been studying the meteor shower.

It is not a guarantee that such an event will unfold, but Lyytinen and Jenniskens say that there is a “good chance” that this will bring the first alpha Monocerotids meteor storm since 1995, when it produced rates of around 400 meteors per hour.

Some NASA scientists have chimed in, warning that the outburst may not happen at all, but is still worth heading outside and looking in case the outburst does come to fruition.

What time to look for the flurry of meteors

Knowing when to look for the potential meteor storm is extremely important.

“Unlike most meteor outbursts which last for several hours, strong activity from the alpha Monocertids is over within an hour and easily missed,” the American Meteor Society (AMS) explained on its website.

Onlookers should start looking for shooting stars around 11 p.m. EST and continue looking through midnight for the best chance to see the potential meteor storm. If you are not outside during this window, you may miss the celestial light show entirely.

“These meteors are never spaced evenly but appear in bunches so 2-3 meteors may be seen seconds apart and then an entire minute could go by without any activity,” the AMS said.

What exactly is a ‘meteor storm’

We have all heard of meteor showers, sparked when the Earth passes through a field of debris left behind by an asteroid or comet. “[I]f the dust trail is small and dense, then the resulting meteor shower may result in hundreds, or perhaps even thousands of meteors burning up in just minutes,” the National Weather Service (NWS) explained.

“If this scenario happens, that the meteor shower is referred to as a meteor storm,” the NWS added.

One of the most prolific meteor storms in recorded history unfolded on Nov. 17, 1966 when onlookers witnessed many as 40 meteors per second, or 144,000 meteors per hour, according to the AMS.

The alpha Monocertids is a mysterious meteor shower as scientists are unsure about when it started, or what exactly is causing it.

“This outburst is caused by the dust released by a long-period comet, but the comet itself is still unknown,“ Lyytinen and Jenniskens explained.

Despite these uncertainties, one thing is known for sure: the meteors radiate from Monoceros, a faint constellation that is Greek for unicorn and located just to the left of the well-known constellation Orion.

Contrary to popular belief, shooting stars will be visible in much of the night sky, not just the area near the unicorn constellation, as long as clouds do not obscure the sky.

Credit: AccuWeather
The best weather conditions for the alpha Monocerotid meteor shower are expected across the southeastern, north-central and western United States with only patchy clouds in the forecast.

The best weather conditions for the alpha Monocerotid meteor shower are expected across the southeastern, north-central and western United States with only patchy clouds in the forecast.

However, NASA is warning that even if there is a meteor storm, onlookers across the western half of the continent may not see many meteors as the radiant point will be well below the horizon.

Meanwhile, a far-reaching storm will spread disruptive clouds from the central and southern Plains, through the Great Lakes and Northeast and over much of eastern Canada.

The peak of the shower will have concluded by the time night falls in Hawaii and Alaska.

Stargazers should keep in mind that there is a chance that the meteor storm does not materialize.

Even if the outburst does not unfold, people should still be able to see up to 10 "sporadic" meteors per hour, according to the AMS.

Additionally, the moon will not rise until around 3 a.m. local time, meaning that the shower will not be contested by the biggest source of natural light pollution.

If the forecast meteor storm does pan out, it will be just the fifth-known outburst of the alpha Monocertids on record. The previous occurrences were recorded in 1925, 1935, 1985, and 1995.