Forecasting the potential for 'another blockbuster snowstorm' in the Northeast

There is a chance that cities like Washington, D.C., Philadelphia, New York and Boston, as well as the surrounding areas, could endure a major snow event. 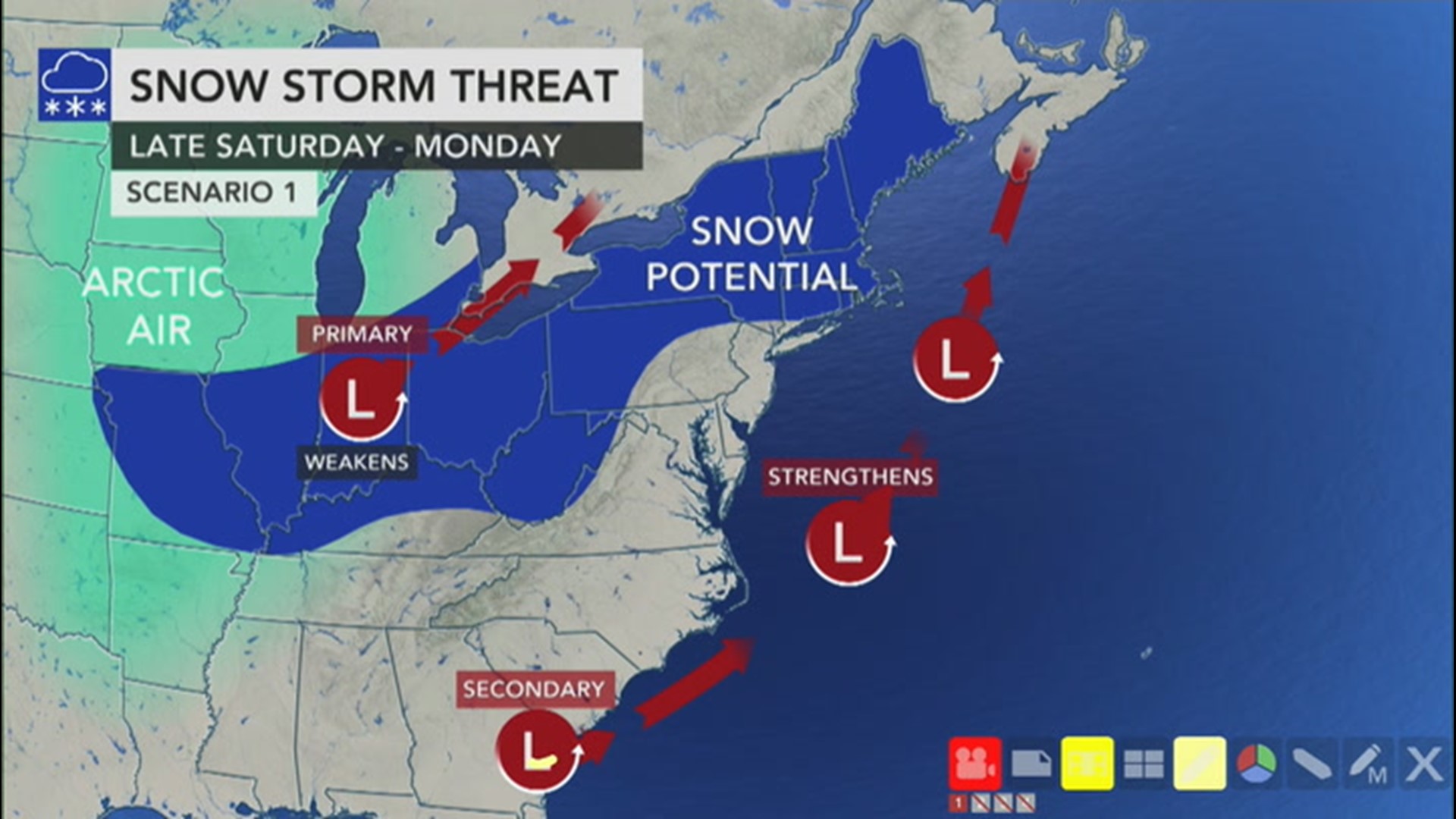 A record-setting snowstorm wasn't even in the rearview mirror for the Northeast yet on Tuesday, but AccuWeather meteorologists were already busy analyzing an upcoming weather pattern that could yield yet another major snowstorm. Forecasters say a storm could form in the same area as the last, with the potential for it to chug right up the East Coast and dump heavy snow on areas that were just pummeled.

There is a chance that cities along the I-95 corridor, like Washington, D.C., Philadelphia, New York and Boston, as well as those surrounding areas, could endure another significant snow event, adding to what is a substantial snowpack already on the ground in some places after a major nor'easter crawled up the Eastern Seaboard early this week. And a blast of Arctic air will plunge nearly two-thirds of the country into a deep freeze that will bring some of the season's lowest temperatures yet.

"For at least the next week, the weather looks pretty tumultuous in the eastern two-thirds of the United States," AccuWeather Senior Meteorologist Rob Miller said.

Forecasters say it will take days for the pattern to take shape that could spawn a whopper of a storm along the East Coast, and it will all be set into motion by a winter storm that will sweep into the Plains Thursday into Friday.

The flow will change, and another big dip in the jet stream will occur behind that first storm, AccuWeather Chief On-Air Meteorologist Bernie Rayno explained.

"This is the dip in the jet steam that's going to bring the coldest air mass of the season easily across the Midwest and especially into the Northeast," Rayno said.

"Anytime you get an injection of cold air, you have two chances for snow -- on the front end and the back end," Rayno said. "Well, we're going to have a chance for two storms on the front end of this cold."

The first storm will occur along the leading edge of the cold air across the Midwest on Saturday, but then, as that system moves off to the northeast, the big changes will come into play and all of the ingredients may come together for another hard-hitting winter storm.

"As the cold air continues to spill southward, we'll get a secondary storm to develop off the Carolina coast - and that is the storm that has the potential of being another blockbuster snowstorm," Rayno said.

However, that secondary storm could also head out to sea without having a huge impact as a snowstorm.

"As is typical, there are a number of pieces in the atmosphere that will be at play and will help to determine where the weekend storm tracks," AccuWeather Senior Meteorologist Brett Anderson said.

"One particularly important piece will be a weak storm moving through the Ohio Valley and Great Lakes ahead of the big storm. This storm could draw the coastal storm westward, or 'phase' with the storm, leading to a track closer to the coast and likely a blockbuster snowstorm for the East," Anderson said.

However, Anderson also said the same storm could instead help to push the next, larger storm farther off the Atlantic coast, which would, in turn, cause it to bypass most, if not all, of the East Coast.

"There will be at least some snow spreading from the Ohio Valley into the Northeast from the initial disturbance, so even if the big storm bypasses the region, there still could be some slippery travel," Anderson explained.

"This primary storm will at least occur, no matter what," Rayno said, referring to the first storm over the weekend. "Some accumulating snow should occur from Kansas City and St. Louis into western Pennsylvania, causing some slippery travel along routes like Interstate 70 this weekend."

If the bigger secondary storm materializes, forecasters say many already digging out in the Northeast could see another round of double-digit snowfall totals and major disruptions.

"In this scenario, where the secondary storm hugs the coast, heavy snow could also break out from the Appalachians through New England, with a full-blown blizzard likely to unfold in the Northeast," Rayno said.

If the storm moves farther west still, then different problems could arise along the Eastern Seaboard.

"A storm track closer to the coast, or even just inland, could mean more rain and wind for residents near the coast, but that could also bring a flooding threat -- both from rain and surf action," AccuWeather Senior Meteorologist Alex Sosnowski said.

Regardless of how the pattern plays out this weekend, one thing forecasters agree on is the potency of the Arctic blast that will first target the Plains and then be ushered eastward.

"The Arctic intrusion that is ushered in this weekend into early next week will be even colder for the northern Plains and Upper Midwest than the one Thursday and Friday of this week," AccuWeather Lead Long-Range Forecaster Paul Pastelok said. "Some parts of North Dakota and northern Minnesota could flirt with -40 degrees Fahrenheit, and that doesn't include RealFeel® temperatures when combined with the wind."

The bitter cold will also spread all the way through the East Coast by early next week, with parts of the Ohio Valley and interior mid-Atlantic potentially falling below zero as well. The wind will also drive AccuWeather RealFeel® temperatures even lower than actual readings.

"This whole pattern is going to bring a big increase in heating demand all the way from the Plains through the East," said Pastelok.

The upcoming atmospheric pattern marked by a winter storm forming near the Gulf or Southeast coast along the leading edge of an Arctic intrusion then charging up the Eastern Seaboard is well known to meteorologists. It even has a classification among meteorologists, who refer to this weather pattern as a "Miller A" storm, named after a prominent meteorologist who studied winter storm patterns.

"The reason these types of storms are so well known in meteorology is because they have resulted in some of the biggest East Coast blizzards in history," said AccuWeather Meteorologist Brett Rossio. "They are the 'top dogs' when it comes to East Coast snowstorms, but they are also much less common."

One of the most infamous storms that formed under similar conditions, and was classified as a 'Miller A' type storm, was the Blizzard of 1993. This storm is also known as the "Superstorm of 1993" or the "Storm of the Century."

Over 1 foot of snow fell as far south as Birmingham, Alabama, and the highest snowfall report was 56 inches at Mount Mitchell, North Carolina. Tornadoes ripped across Florida while the storm set records for lowest barometric pressure and packed hurricane-force wind gusts, some over 100 mph, from Cuba to Atlantic Canada. The storm claimed 208 lives.

AccuWeather forecasters say this storm is highly unlikely to become anything like that, but it can still be a powerhouse storm if it does come to fruition.

"The Blizzard of '93 was different -- a completely different magnitude with respect to other storms in this category," Rossio said. "There is a reason that storm is called the 'Storm of the Century' and is still studied by meteorologists to this day. That storm was a precedent to how powerful they can become," he went on. "Still, peak snowfall totals of 2 or 3 feet and hurricane-force wind gusts just off or along the New England coast are still not uncommon occurrences when these storms form."