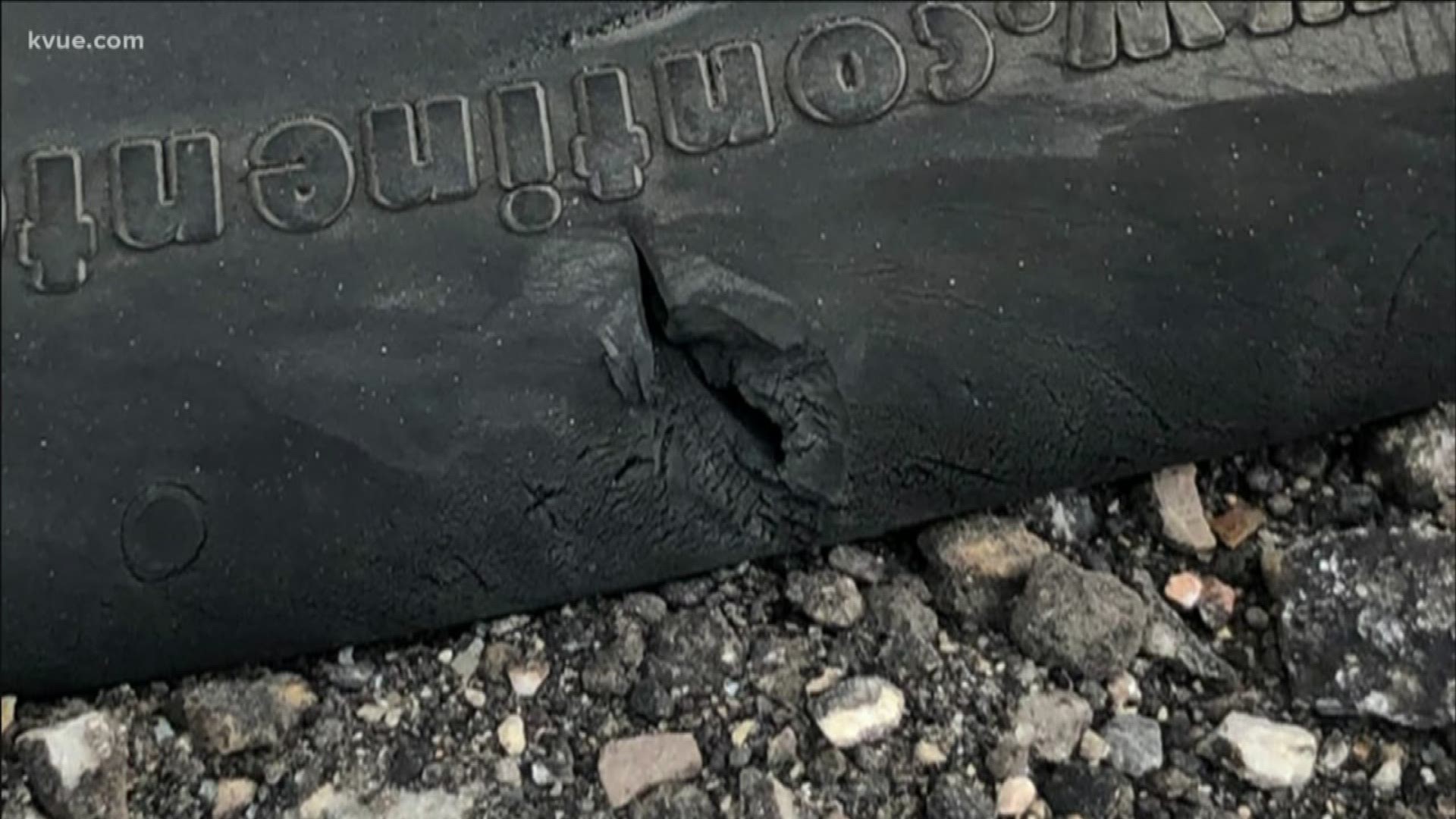 JARRELL, Texas — It's supposed to make the drive south on Interstate 35 through Jarrell smoother, but a project to repave all three lanes of traffic is making some drivers angry.

"All of a sudden, I saw the rock come up unto my windshield and it just spread and cracked all over," Cassidy Moss told KVUE.

She is one of a long list of drivers who are upset over the conditions of the southbound lanes of I-35 in Jarrell.

Last Monday, a flying rock cracked Moss' windshield while she was driving to work. Then, this past Saturday, she got a flat tire.

"The guy who helped me ... he took it out and said it was unfixable," she said.

The tire shop charged her $200 to replace the tire.

"It's a lot of money just to dish out in a week," Moss said.

Since last month, the Texas Department of Transportation has been milling the road to prepare it for repaving, according to a spokesperson.

But that work has left potholes in the road and loose gravel across the lanes. And since then, the complaints on social media have grown.

Caitlin McLean told KVUE her headlights have small cracks and her bumper has small chips from the flying rocks on I-35.

"I was a safe distance away from the car in front of me, and rocks were still getting thrown on me and people next to me were just buzzing by," she said.

What the Beep: Progress on one of northwest Austin’s most congested intersections

On Thursday morning, McLean said her husband was one of several drivers stuck on the side of I-35 with a flat tire.

"He said he had hit a pothole and shredded the tire," McLean said.

The Williamson County Sheriff's Office shared photos of the potholes on social media, which a TxDOT spokesperson said were fixed Thursday afternoon.

The overall problem on that stretch of I-35 in Jarrell has even gotten the attention of State Representative Brad Buckley. He sent the following statement to KVUE:

"Over the past week, I have received numerous calls and emails from my constituents in Salado regarding construction work being performed on Interstate 35 between Salado and Jarrell in southern Bell County and northern Williamson County. Many of my fellow neighbors in the Salado area are concerned about the accumulation of dust and gravel along the roadway as a result of ongoing milling and re-paving work along this stretch of I-35.

I understand that the process of milling and re-paving our roadways inevitably produces some debris and dust near roadway work zones. However, I have serious concerns about the unnaturally high levels of dust, gravel, and debris that have accumulated along this stretch of I35 as a result of ongoing road work. High levels of dust significantly reduce roadway visibility, especially at night, and the accumulation of loose gravel between lanes has caused extensive damage to the vehicles of motorists who regularly commute along this section of I-35.

My staff and I have been actively working with the Texas Department of Transportation to investigate and address this issue, and will continue to work toward ensuring the safety of all motorists utilizing I-35 in the affected area."

Regardless of what happens next, both Moss and McLean said someone needs to pay up for the damages.

"It's not fair to us and all the other people driving on the road to fix our own cars when, ultimately, it was failure on their part to make sure the roads were safe for us to drive on," McLean said.

A spokesperson with TxDOT told KVUE crews are supposed to repave the lanes on Thursday and Friday nights. Damage to vehicles can be reported here.

An email requesting comment from Austin Materials LLC, TxDOT's contractor for the project, was not answered.

WATCH: What The Beep: Why are so many new roads toll roads?