Here's a look at road closures and services closed by icy conditions. 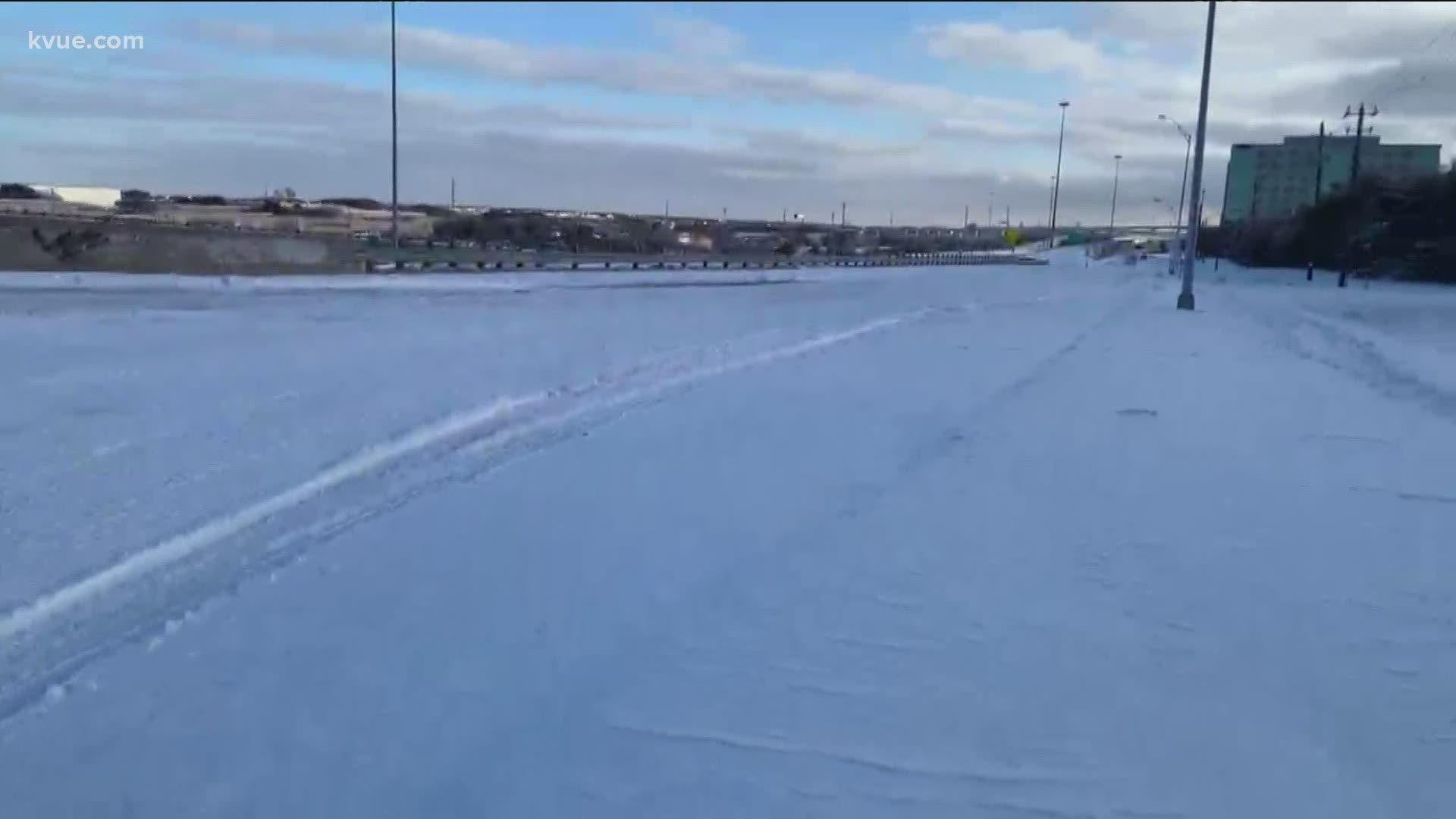 A wintry weather forecast has created icy road conditions in the Austin area.

The Texas Department of Transportation (TxDOT) began to pretreat bridges and overpasses on major Austin roads on Wednesday in preparation for the expected icy conditions. Even so, dozens of crashes were reported throughout the area since Thursday morning.

Because the surface temperatures are so cold, officials are warning about a thin layer of ice that has formed on many roads due to the drizzly weather. This means that all roads, not just overpasses and bridges, are potentially dangerous.

Drivers are being urged to stay home. But if you must drive, you can check for real-time roadway conditions in your area on DriveTexas.org.

Here's a look at what road and City service closures have been reported in Central Texas:

Our main dispatch number is operational again. If you need school district police services, call 512-414-1703 or 911 for emergencies only.

12 a.m. – City of Austin asks residents to stay off the roadways unless absolutely necessary, do not call 911 to report outages and continue to conserve as much energy as possible.

Temperatures and weather conditions in the region are still hazardous. Residents are asked to:

First responders are working as quickly as possible. pic.twitter.com/7Py1FiCPN4

8:25 p.m. – All YMCA of Austin branches will be closed on Tuesday due to ongoing power outages and dangerous road conditions.

11:12 a.m. – The Lago Vista PD is warning of availability for individuals who choose to travel and may have an emergency crash.

We don't like when it snows under our carport. The roads are still closed down. If you CHOOSE to leave your location and have an emergency or crash, no one can respond. Stay home, stay safe...... pic.twitter.com/2BLwufSjzq

11:08 a.m. – City of Austin parking enforcement has suspended operations today, Monday 15. If you're in a paid parking spot, don't worry about moving your car. Stay indoors and off the roads.

10:11 a.m. – The Texas Division of Emergency Management urges residents to continue to shelter in place and avoid traveling in any manner. There are power outages going on across the state.

9:35 a.m. – There are currently about 18 exit closings throughout 11 miles of the MoPac Expressway.

There are currently about 18 exit closings throughout 11 miles of MoPac. #atxtraffic #atxwx #traffic #kvue pic.twitter.com/EY4zUBuACG

9:20 a.m. – KVUE's Shane Hinton reports that numerous closures are popping up along 290. He says more closures have been occurring closer to the metro area as the morning has progressed.

8:32 a.m. – TxDOT Austin crews are working to clear the overnight snowfall, but the roads underneath are still frozen. Stay home and avoid driving unless absolutely necessary.

"Last night at approximately 8:45pm, the Schulenburg Police Department responded to the Interstate 10 Frontage Road near Best Western and the Hitching Post at US HWY 77.

"As officers Tobey McFadden, Brent Gindler and Frank Parkinson were working the accident, Officer Parkinson was sitting in his patrol unit speaking to two individuals at his driver’s door.

"Another vehicle hit an icy spot on the overpass and began rolling down the embankment towards the frontage road.

"As the second vehicle was rolling towards Officer Parkinson's patrol unit, he pulled one person into his unit as the other one ran.

"We would like to commend Officer Parkinson for his situational awareness and quick thinking as he pulled the second person into his patrol unit.

"Everyone involved is okay.

"Use this video as a reminder to slow down and stay off of the roads unless it's absolutely necessary to travel."

12:25 a.m. – The Austin EMS Association said while road conditions aren't great for local medics, they are still doing everything they can to bring life-saving services to those in the area on Sunday night.

Road conditions aren't great for your Austin medics, but we're still doing everything we can to bring life saving medicine to you wherever you need it. pic.twitter.com/0ipbhQkhvf

10 p.m. – Austin Mobility said to not report flashing traffic signals to 311 for the remainder of the winter weather event. Officials said the signals that enter flash mode during the storm will remain on flash until we can safely dispatch signal technicians to them.

⚠️ Please do NOT report flashing traffic signals to @ATX_311 for the remainder of this inclement weather event.

🚦Signals that enter flash mode during the storm will remain on flash until we can safely dispatch signal technicians to them. #ATXtraffic (1/2) pic.twitter.com/4RzOxqvoxG

9:50 p.m. – City of Pflugerville crews have stopped sanding roadways for the night due to deteriorating conditions.

8:35 p.m. – Austin-Travis County EMS said it has received nine weather-related "environmental exposure" calls on Sunday. Medics have responded to 38 traffic injuries, seven of which were from rollovers, and 46 ice-related falls, ranging from minor injuries to broken bones and head injuries.

In-person appointments will be rescheduled or converted to virtual visits where appropriate, Baylor Scott & White said.

6:30 p.m. – City of Georgetown facilities will be closed to the public Monday, Feb. 15, in response to winter weather.

City street crews will continue to treat roads and bridges.

4:56 p.m. – Due to icy road conditions, ATCEMS said it was having difficulty responding to calls. Seventeen out of its 38 at the time of the announcement were for falls. ATCEMS advised people to stay off of icy areas.

HAPPENING NOW! 17 out of our 38 current calls are for falls.

Falls on hard ice covered surfaces can be serious and even deadly!

Our responders are having extreme difficulties responding safely or even at all due to the current road conditions.

4:27 p.m. – TxDOT CEO James Bass said the Austin toll roads open (as of 4 p.m. Sunday and are subject to change) were the following:

Bass also advised drivers to stay home if at all possible.

4:20 p.m. – The Central Texas Food Bank announced it had canceled its food distributions for Monday, Feb. 15 due to severe weather and hazardous road conditions. The food bank also said it would be closed on Monday.

Customers are asked to leave any uncollected carts, yard trimmings, bulk items and large brush at the curb to allow our crews to catch up. If possible, customers should set their carts or other material out as usual, but be aware that service has been delayed. Weather permitting, ARR will catch up over the week and into next weekend.

3:44 p.m. - Southbound lanes of US 281 in Blanco County are being shut down from Johnson City to Comal County.

3:35 p.m. - The Hays County Sheriff's Office said it has received reports of stranded motorists who cannot be reached by local authorities.

"Every effort is being made to reach the motorists but, in some cases, it may be impossible due to the ice on the roadway," the sheriff's office said.

If you mush drive and become stranded, officials will be asking:

"They will dispatch first responders to you but there is no guarantee that they can reach you," the sheriff's office said. "If you choose to abandon your vehicle, try to get it off the roadway as best as possible and remove all your personal belongings. Call dispatch back to let them know that you are leaving your vehicle. Do not ask dispatch whether you should abandon your vehicle. The decision must be made by you."

2:46 p.m. - The Leander Police Department reports that its crews are now unable to continue sanding efforts due to worsened roadways.

"This means that roads are NOT safe to drive on and it may be difficult for us to get to you if there is a collision," the LPS said. "Please stay home and stay safe."

Is it worth it? Traveling right now is not advised. It is absolutely dangerous to you and those around you. There is wide spread weather impact and you should not assume the roads have been treated. This photo is from the last 30 minutes. Please avoid traveling. pic.twitter.com/yRdd9Dpgut

2:30 p.m. - The Cedar Park Police Department issues a plea for people to stay home due to road conditions.

At this point the roads have become impassable in Cedar Park. Some cars are even getting stuck and stranded.

YOU NEED TO STAY HOME.

Media Partners: Please help us get the word out about the dangerous conditions. pic.twitter.com/TH4oKEoWyc

2:27 p.m. - A shutdown is reported on FM 1431 between Jonestown and Lago Vista due to multiple cars stuck on the hills.

2:25 p.m. - The Central Texas Regional Mobility Authority announces that it will be closing all of its facilities until further notice. The following roads will be closed until they can be treated effectively:

The Mobility Authority will be placing traffic cones and barriers at roadway entrances, directing drivers to the access roads. The adjacent frontage roads to 183A, 290E, 71E and 183S will remain open as conditions allow. The general purpose lanes adjacent to the Mopac Express Lanes will also remain open. 45SW traffic will need to find alternate routes using FM 1626 to Menchaca Road, or IH-35.

2:13 p.m. - ATCEMS reports that it is responding to a drastic increase in calls for service related to the weather.

"This is an unprecedented weather event for our area, and due to the dramatic increase in calls for service, ATCEMS has made several operational changes, to preserve the safety of our patients, and our medics," said ATCEMS Chief of Staff Jasper Brown. "We need the public to do their part, by staying home, off the roads, and staying indoors during this event."

Here's an overview of operational changes for ATCEMS:

So far today, ATCEMS has responded to the following weather-related incidents:

If you are involved in an ice-related collision, medics ask you to remain in your vehicle until responders arrive and provide you with instructions. Traffic will likely be approaching and may be affected by the conditions too.

12:42 p.m. - ATCEMS reports that many roadways remain impassable and medics will only be transporting patients to the closest hospitals.

Affective immediately #ATCEMSMedics will only be transporting to the CLOSEST hospital. #ATCEMS has activated our 4x4 vehicles, as well as utilizing fire department vehicles to access patients on many 911 calls. Many roadways are impassable. #StayHomeStaySafe pic.twitter.com/TGbWRawQnP

12:25 p.m. - A crash was reported at MoPac southbound between Cesar Chavez Street and Stratford Drive.

12:08 p.m. - MoPac is closed at Lake Austin Boulevard due to a multi-vehicle crash. Detour to side streets and consider alternatives.

11:43 a.m. - Cedar Park police is working with Central Texas Mobility Authority to close down its section of the 183A Toll in both directions due to dangerous conditions.

Significant slowdowns along I-35 continue this morning. There is a disabled vehicle blocking the right lane on I-35 near Exit 223. Traffic is backed up to Exit 225. #atxtraffic #atxwx #kvue #sunday #traffic pic.twitter.com/1Ed8OrP9Kg

10:47 a.m. - Round Rock police report that the entrance ramps from Louis Henna Boulevard to SH 45 are closed. The flyovers connecting I-35 and SH 45 are being treated for ice and should be avoided.

Still tracking the slowest driving conditions for areas along and east of the I-35 corridor. Something worth noting is that emergency vehicles are have a difficult time responding to incidents due to ice on the roads. #atxtraffic #atxwx #kvue #sunday #traffic pic.twitter.com/8ULSkxbqHI

8:34 a.m. - Bastrop County OEM reports dangerous conditions on SH 71 at the Colorado River bridge from a previous accident that knocked down a section of the bridge barrier.

We have had numerous reports of icing on roads. There is a particularly dangerous situation on SH 71 at the Colorado River bridge from an earlier accident that knocked down a section of the barrier on the bridge. Please stay off the roads unless travel is an absolute necessity. pic.twitter.com/3hBbzz9CPF

5:42 a.m. - 183 proper from the intersection with the toll road to San Gabriel Parkway is closed due to ice.

Tips on how to drive in wintry weather

TxDOT said drivers should follow these guidelines to keep themselves and others safe:

'We need people across the state to get ready,' Gov. Abbott says amid winter storm