One group is suing over concerns related to the survival of two breeds of salamanders, while others hope to avoid project delays and environmental destruction.

On Monday, nonprofit Save Our Springs Alliance (SOS) filed a lawsuit against the Texas Department of Transportation (TxDOT) and the U.S. Fish & Wildlife Service, stating that the organizations violated the Endangered Species Act (ESA).

In that lawsuit, SOS said TxDOT failed to ensure that its proposed Oak Hill Parkway will not jeopardize the survival of the Barton Springs Salamander and Austin Blind Salamander, through "its reliance on [the U.S. Fish & Wildlife Services'] unlawful concurrence" and TxDOT's "failure to reinitiate consultation in light of new information about the project's impacts."

TxDOT has said the proposed project may affect but is not likely to adversely affect the salamanders.

The Oak Hill Parkway project would expand the area known as the "Oak Hill Y" to up to 12 lanes in some locations and would include 2.65 miles of ground excavation, averaging 25 feet deep – within the recharge zone of the Barton Springs part of the Edwards Aquifer. SOS said the salamanders depend on those underground waters and "changes in water quality and flow patterns can render aquatic habitat unsuitable" for them.

The lawsuit states that, according to SOS, TxDOT failed to use the best scientific data available in concluding the project is not likely to adversely affect the salamanders and failed to consider all direct, indirect and cumulative effects of the project on the salamanders.

"Addressing the known environmental concerns through additional design work now, instead of during construction, could save TxDOT a lot of hassle in the future," said Kelly Davis, senior staff attorney for SOS. "It's not a question of if TxDOT will encounter voids [where salamanders live] on this project, it's simply a question of how much time and money it will cost our community by TxDOT's failure to take environmental conditions fully into account."

The SOS is in favor of the "Livable Oak Hill" parkway alternative to TxDOT's Oak Hill Parkway plan. According to SOS, the design "focuses on improving congestion through the Oak Hill Y by removing street lights and grade separating arterials via bridges that would extend over the parkway's surface-level main lanes."

You can view that lawsuit in full below:

Also on Monday, a "pro se" (without a lawyer) lawsuit was filed against the project by Fix 290, Save Oak Hill, the Save Barton Creek Association, the South Windmill Run Neighborhood Association, Clean Water Action and nearby resident landowners. The group is suing TxDOT, as well as the Capital Area Metropolitan Planning Organization (CAMPO).

This group does not wish to stop the project, but rather to work with TxDOT "to improve the project and avoid litigation and construction caused delays," according to a press release sent out by Fix 290 and the Save Barton Creek Association. Advocates said that excavation in the area will encounter caves, which will cause project delays and environmental destruction including possible detriment to the water quality of Williamson Creek, the Williamson Creek watershed and the Edwards Aquifer.

"TxDOT's current plan doesn't consider the unique nature and history of the Oak Hill area. We don't want even one minute's delay on the project's completion. After all, we've waited decades for traffic relief. However, the scale of construction in this plan – with its massive clearing, grading and digging – will force years of congestion delay before it's all finally done," said Carol Cespedes, an Oak Hill resident with Fix 290.

The lawsuit also lists several flaws with TxDOT's environmental review process, similar to those pointed out in the lawsuit from SOS.

"We are asking TxDOT to sit down with us and work together to implement a project design that meets the needs of the Oak Hill community and protects our environment," said Angela Richter, executive director of the Save Barton Creek Association.

You can view that lawsuit in full below: 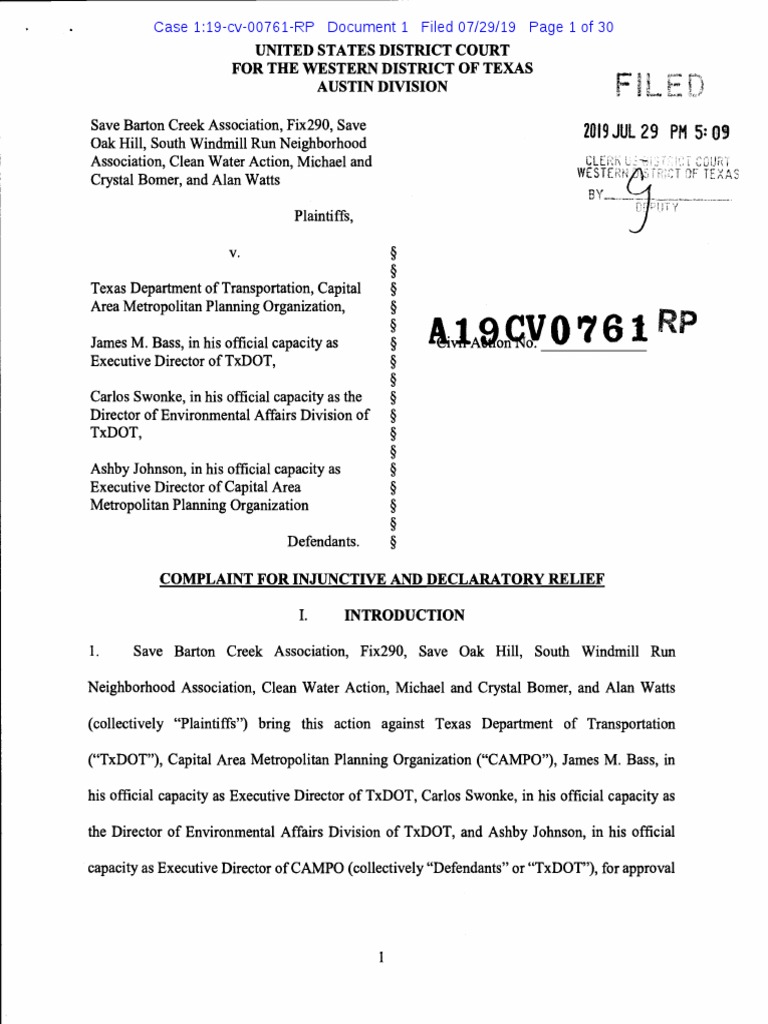 KVUE reached out to TxDOT regarding the lawsuits. They responded, "We do not comment on pending litigation."